On December 9, 2019 the long-awaited Normandy Four summit was held in Paris. Despite the concerns of many Ukrainian analysts President Zelenskyi having no extensive political experience did not become an “easy prey” for Putin. After the summit participants of the “No to Capitulation!” rally in Kyiv held to warn the authorities said they are putting the protest on hold. In other words, betrayal of the national interests feared by Kyiv has not happened.

The Ukrainian President succeeded to avoid a number of traps and risks posed by the meeting and even achieved a few tactical wins during the talks. What they are and what to expect next, read on.

The meeting of the four state leaders and their joint press conference revealed what is long known: the Russian and the Ukrainian sides share no common vision of the how the situation in Donbas should be resolved. The speeches of Zelenskyi and of Putin describe two different realities. Ukraine aims at restoring its territorial integrity by having Donbas and Crimea returned, regaining control over the state border; it rejects federalization, strives to preserve the unitary state and the course of foreign policy chosen by its people. President Zelenskyi managed to clearly affirm the position in public during the joint press-conference in Paris.

He also clearly stated that Crimea is Ukrainian and that Ukraine will not be negotiating with the proxy “republics” no matter how much Putin insists. “Ukraine and me, the President, are not holding direct talks with representatives of illegal authorities in the temporarily occupied areas,” Zelenskyi reassured.

Meanwhile Russia is trying to present the armed conflict in eastern Ukraine as an internal one, a civil war. The Russian Federation insists on implementation of the Minsk agreements concluded by the Normandy Four countries in February 2015 under Russia’s military pressure and during the advance of the Russian troops in Debaltseve. Today Russia demands that these agreements are implemented particularly emphasizing political aspects: it thus insists that Ukraine should grant permanent special status to the occupied areas cementing it in Ukraine’s Constitution, hold local elections in these areas before it regains the control over the state border, grant amnesty to the militants etc. 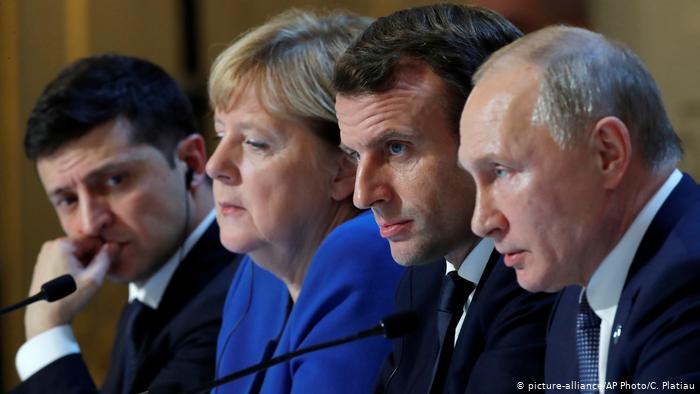 What has been agreed?

Despite strategically different goals and a different vision of the conflict in Donbas that Ukraine and Russia have, the parties managed to agree several tactical steps to contribute to de-escalation and to continue the talks.

Prisoners swap by the end of the year. It concerns the “conflict-related detainees” held in the so-called “DPR” and “LPR”, not all prisoners, as there are detainees held in prisons in the Russian Federation and in Crimea. Talking to Ukrainian journalists after the joint press-conference President Zelenskyi explained that the agreement concerns the prisoners held in the occupied Donbas – in the “basements of Donbas”. Ukrainian prisoners of conscience jailed in the Russian Federation as well as prisoners held in occupied Crimea will not be subject to this coming swap. They failed to agree on that with Putin.

“We agreed on the start – all identified for all identified. Next they will show us the lists. It is now about Donbas. Let’s make the first step. It is a big step as 72 persons may be able to come home,” he said.

Disengagement of troops in three additional sites before March 2020 (not specified where). In the beginning of the press-conference Angela Merkel mentioned that these areas are located near Stanytsia Luhanska and Petrivske.

Expanding OSCE SMM’s mandate. 24/7 monitoring is implied as opposed to the monitors’ working hours now ending before dark. It has been often resulted in their reports being disconnected from reality as militants often fire upon the Ukrainian troops’ positions at night. Previous attempts to agree night patrolling for OSCE monitors had not been successful.

Full ceasefire implemented by the end of the year (similar ceasefires were being regularly agreed but constantly violated). On the day of the Normandy meeting alone three Ukrainian troops were killed in action.

The sides also agreed that the next Normandy-format meeting will have been held until March 2020. 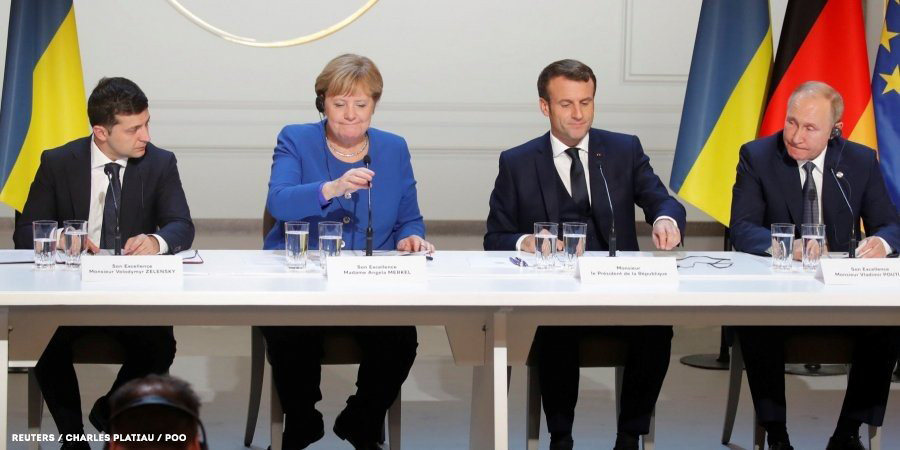 What has not been agreed?

Holding local elections in Donbas. The parties failed to agree on the progress concerning elections. As per the Ukrainian scenario, elections should become the closing stage of de-occupation, the latter should start from withdrawal of all troops. There has been no progress in that.

Readiness of Ukraine’s western allies to have a more flexible take on the Minsk agreements became an important diplomatic victory of the meeting. To remind, Ukraine signed the second Minsk Protocol in February 2015, some of its paragraphs are not in the interests of Ukraine. It particularly concerns control over the border.

If read literally the “Minsk” says that elections in the occupied areas should be held without Ukraine controlling its state border. However it makes no sense, Kyiv denies, it will actually mean that there is no border for Russian subversive groups, mercenaries and weapons. Free elections are not possible under such conditions, Ukraine says.

Paragraph 9 introducing the order: first come elections in Donbas, then – control over the border is restored, is actually the most controversial part of the document that was signed back in winter 2015.

The disagreement on this paragraph that lasted three years made all previous Normandy talks come to a dead end, no meetings were held after 2016.

Ukraine has been wondering for several years if the Minsk agreements can be changed. Can it be done to Ukraine’s benefit?

At the Normandy Summit of December 9, 2019 France confirmed that Zelenskyi’s words signaling his intention to revise the order of the steps “have legitimate grounds”.

Berlin also supported this position. The German Chancellor Angela Merkel supported Zelenskyi in his bid for these changes which is good news for Ukraine. “It is a question if this document (the Minsk agreements) is hard as stone or if it can be changed. There are certain suggestions by President Zelenskyi on changing it. (…) We hope that this document will be flexible again and that it will be revived,” Merkel emphasized.

This episode is illustrative of the international support granted to Ukraine by the West that not everyone in Ukraine was quite sure of. It is even more important that for President Zelenskyi this “red line” is not to be crossed.