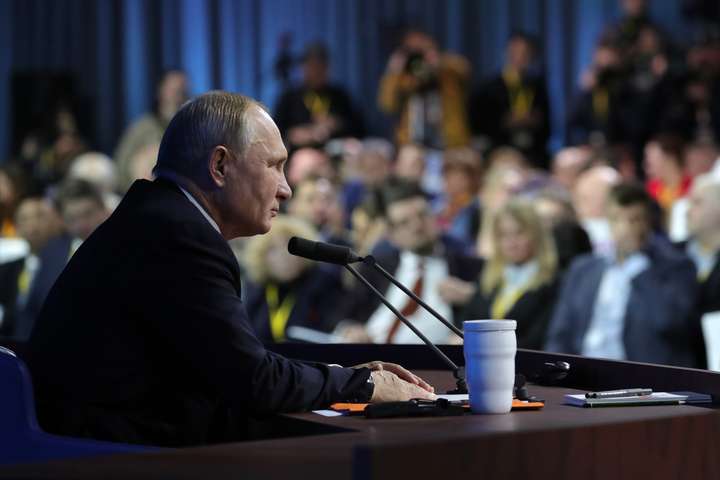 On December 19 the President of the Russian Federation Vladimir Putin held an annual news conference. Ukraine came into the spotlight quite a number of times.

Putin mentioned the war in Donbas and Kremlin-backed leaders of the so-called “DPR” and “LPR”. He was also asked to speak of when the Ukraine-Russia state border in the east will be sealed and if Gazprom is to pay off the three-billion-dollar debt to Naftogaz, read on.

One of the most scandalous remarks that Putin made at the press conference suggests that the entire Black Sea region and the eastern part of Ukraine are original Russian territories and the Russian Federation is now dealing with it (the legacy of Vladimir Lenin’s state-building).

“What did Vladimir Illich Lenin propose? He actually suggested not a federation but a confederation. By his decision ethnic groups were linked to specific territories and were granted the right to leave the Soviet Union.”

“Nevertheless the territories were cut in such a way that they did not always correspond to traditional settlements of the ethnic groups, so that pain points immediately emerged. They still stand between the former republics, even within the Russian Federation there are 2.000 such points.”

“Stalin was against this structure but in the end he accepted Lenin’s formula. What came out of it? We’ve just talked about our relations with a colleague from Ukraine.”

“As the Soviet Union was being created, original Russian territories that had nothing to do with Ukraine, the entire Black Sea region and Russia’s western lands were passed to Ukraine with a strange motivation ‘to increase the share of the working class in Ukraine’ because Ukraine used to be a rural area. This decision is quite strange but it did happen. It all comes as the legacy of the state-building by Vladimir Illich Lenin and we are now dealing with it.”

On Minsk Agreements: “Minsk revised will hit a dead end”

Putin also spoke of the Minsk agreements that were discussed at the summit in Paris. “The statement by Volodymyr Zelenskyi made after the Paris negotiations that they can be revised, raises alarm. If revision of what was agreed in Minsk starts, the whole situation can come to a dead end,” Putin said.

“Former President Petro Poroshenko who represented Ukraine in Minsk insisted that this document is signed by the heads of the two unrecognized republics. All three of them (Petro Poroshenko, François Hollande and Angela Merkel – edit.) grabbed me by the throat, while representatives of the unrecognized republics kept refusing. I am now opening, so to say, the behind-the-scenes part of our negotiations in Minsk. We did convince them and they put their signatures. So Ukraine did recognize that these authorities exist.”

On the Law on the special status of Donbas: “to be cemented in Constitution”

“The law on the special status (the Law on special order of local self-government in the defined districts of Donetsk and Luhansk regions – edit.) is the key paragraph of the Minsk agreements. It is a positive sign that it was extended for one year but it also has to be cemented in the Constitution and made permanent. Seems like neither the former Ukrainian authorities, nor the actual ones intend doing it. There must be a direct dialogue with Donbas. Amendments to the Constitution on decentralization are now announced. Well, good, but what is it? Are they to substitute the Minsk agreements? If it concerns Donbas, it needs to be agreed with these regions but it has not been done.”

“There are no foreign troops there. There is local militia and local self-defense forces, they are composed of local residents. Where do their weapons come from? There are many hotspots in the world where combat actions are taking place with the use of tanks and artillery. Where do these weapons come from? From the governments and states that sympathize with them. These weapons are theirs not foreign.”

On Ukraine regaining control of the state border in the east: “border to be sealed after elections”

“Sealing of the border has to start on the second day after elections are held (local elections in the temporarily occupied areas in Donbas – edit.). It will be completed only after the comprehensive political settlement that foresees respective amendments introduced to the Constitution of Ukraine and granting of the rights stipulated by the Minsk agreements to these republics.”

“As to the future meeting, say, in April, it will become topical if there is a positive progress. It’s there, let’s be objective. Firstly, the law on special status has been extended and the basis for the settlement did not vanish. Secondly, the troops were withdrawn from several key points, however our Ukrainian partners do not want the disengagement along the entire contact line. In my opinion, it is a mistake but that’s their position.”

“The number of the attacks has decreased which is also positive but unfortunately they continue. There are issues that are raising alarm. It is all subject to discussion. It is worth proceeding with the work in the Normandy format.”

“The decision is made, it’s true and we need to base on it. I am convinced that the decision by the Arbitration Institute of the Stockholm Chamber of Commerce is not of legal but rather of political nature. One of the arguments suggested by the motivation is ‘due to the difficult economic conditions in Ukraine’.”

“We will be looking for a decision acceptable to everyone including Ukraine. Regardless of new objects constructed, such as Nord Stream 1, Nord Stream 2 and TurkStream, we will keep the transit through Ukraine. The question is in volumes of transit as well as in the contract duration. We are not going to sign a contract of certain duration to then stop the transit. We are interested in it, we want it, this route is convenient.”

Meanwhile it was reported that following negotiations on gas transit in Berlin that lasted over seven hours, Ukraine and Russia reached an agreement on a new contract on Russian gas transit through Ukraine. The news was reported by the European Commission Vice President Maroš Šefčovič at a press briefing after the talks in Berlin on December 19.

Details of the talks are not disclosed as the parties need to have the agreement endorsed by their respective governments in Kyiv and Moscow.

No conditions of the new agreement on transit were revealed to the press. Thus the contract duration, volumes and tariffs of the gas transit remain unknown. These are the key characteristics that have an impact on Ukraine’s level of income as well as on the stability of Russian gas supply to the EU in the coming years.