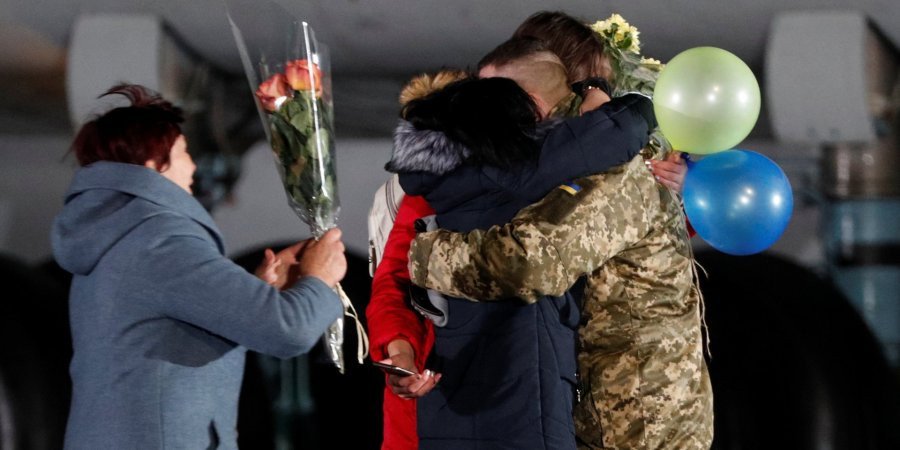 On December 29 Ukraine and Russia-backed “DPR” and “LPR” exchanged prisoners in Donetsk region. The swap comes as the first one in the last two years.

Agreement on exchange of prisoners by the end of the year was made at the meeting of the Normandy Four leaders in Paris on December 9. Parties agreed the swap details through the Trilateral Contact Group meeting in Minsk on December 23. Parties kept silent until the last minute: at midday on December 29 it was still unknown how many persons are being exchanged and who they are. How it went, how the society reacted and what remains unclear – check it out in our text.

Unequal exchange: 76 for 141. Unlike the previous swap on September 7, 2019, the exchange was not an equal one. The format discussed in Paris was “all for all” to be later reshaped to “all identified for all identified”. After the December 29 exchange was completed, Ukraine’s Security Service released the list of Ukrainians liberated from captivity during the exchange held at the control point through the contact line “Mayorske”. Seventy-six persons in total returned to the government-controlled area:12 military and 64 civilians. While the overall number of Ukrainians liberated in course of the swap amounts to 81, five decided to stay in the occupied area with their families, President Zelenskyi said in his welcome remarks.

Ukraine claimed ready to free 141 persons for the exchange – almost twice as many as it received back. In the end the Ukrainian side passed 127 persons as 14 refused to be swapped and preferred to stay in the government-controlled area.

The parties did not explain why the swap was unequal. Whatever the reason is, it means Ukraine will have fewer resources for the next exchange. There is a large number of Ukrainians held behind bars in Russia and in the occupied Crimea. Besides, Russia’s possibilities to be getting new detainees have no limit as it can keep detaining Ukrainians in “DPR”, “LPR” and in the occupied Crimea for future swaps.

Captives exchanged for Berkut officers and terrorists. The exchange featured a scandalous episode. Ukraine agreed to swap five former Berkut riot policemen charged with killing 48 and injuring 80 protesters on Instytutska street in Kyiv on February 20, 2014. Three of them were in pre-trial detention, two – under house arrest. They are Ukraine citizens who have nothing to do with the war in Donbas. They are not “captives” held by Ukraine, they are on trial.

Moreover, included inthegroupofpersonsthatUkraine passed to Russia’s proxies were three individuals (Volodymyr Dvornikov, Viktor Tetyutskyi and Serhiy Bashlykov) whom the Kharkiv district court found guilty of making a terrorist act in Kharkiv on February 22, 2015 that claimed four lives (including minors). The court passed a life sentence. It is thought that Russia deliberately included these persons in the exchange list. The prosecutor asked the court to change the pre-trial measure for them as long as there is a possibility to file an appeal. The court then released them on personal recognizance. Shortly after they were swapped.

To get its captives back (the majority of whom are civilians) Ukraine swapped with Russia persons found guilty of terrorism and mass murder suspects awaiting the court trial.

Legality scorned. Liberation of former Berkut officers and Kharkiv terrorists was a badly staged show. Ahead of the exchange the Prosecutor General Ruslan Ryaboshapka requested that the Kyiv court of appeal changed the group of prosecutors working on the Berkut case. Later the pre-trial measure was changed for all the five suspects. It clearly demonstrated that the court was instrumental in political decisions.

Symbolic defeat of Maidan values. Released ex-Berkut policemen turned to be a painful development for part of the Ukrainian society. Families of the fallen activists – Heaven’s Hundred, addressed President Zelenskyi asking not to liberate the former Berkut staff for the swap. Justice in Maidan cases is the corner stone of Ukraine’s modern history.

Oleg Sentsov, Ukrainian film director liberated from illegal imprisonment in Russia last autumn, commented on the actual swap. Ukraine must be getting back its heroes, Sentsov is convinced, but “not at the price of bringing dishonor to the values that these heroes were fighting for”.

“Today there will be an exchange if nothing changes. Some of our captives will come back home. (…) In exchange Ukraine will give away true murderers: Russian mercenaries, Kharkiv terrorists and five Berkut policemen,” Sentsov wrote.

“It’s not just about us being now left with almost no ‘male resources to swap’ (what a cynical and practical phrase), so that to bring back more of its people held hostage the Ukrainian government will have to keep trading the state interests with the enemy. It is also about this step depriving us of what’s key – justice,” Sentsov wrote.

Justice is what Ukrainians were standing for at Maidan and are fighting for against the occupants, the film director added.

“I am sure that our fighters, our military and our journalists are all heroes. I am convinced that our priority is to bring back our people. I respect all parents and families that lost their loved ones in Maidan. Unfortunately we cannot return those who are gone but we could bring back those alive. I am sure it is the priority. (…) We are bringing back those alive. I’ll tell you more: if I had a hundred Berkut policemen and I had to return one living intelligence serviceman, I would give the 100 Berkut policemen away,” the President said.

What’s next? Ukraine’s Foreign Affairs Minister Vadym Prystaiko welcomed the exchange and said that Ukraine will continue working in the Normandy format to achieve the “all for all” exchange agreement.

“It’s hard to imagine a better present for the 76 families than their dears heading home and staying close on holidays. Agreement made by the leaders during the Normandy meeting is being respected. We’ll continue working during next rounds to achieve the final ‘all for all’ exchange agreement. It is the absolute priority,” Minister Prystaiko said.