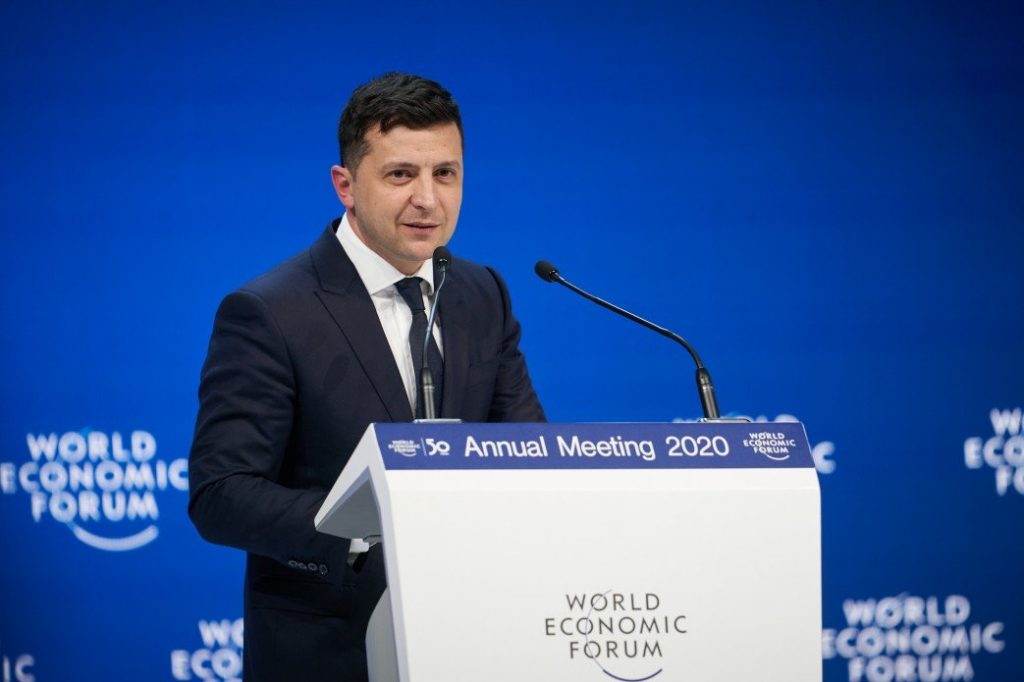 Volodymyr Zelenskyi attended the 50thannual meeting of the World Economic Forum in Davos as the President of Ukraine for the first time. The theme of the 2020 edition is “Stakeholders for a Cohesive and Sustainable World”, while the primary goal of both President Zelenskyi and Prime Minister Honcharuk was to attract investment.

Ukrainian media were following the official delegation’s public speeches and meetings. What is the plan that Ukrainian authorities put forward to attract foreign investment? What are the achievements? UCMC looks into various media reports to find the answers.

In his address at Davos 2020 President Zelenskyi compared those who won’t invest in Ukraine now with Excite CEO George Bell who once rejected the opportunity of purchasing Google for under a million dollars.

According to the President, despite the illegal annexation of Crimea and the war in Donbas, Ukraine is setting an ambitious goal of achieving leadership in Central and Eastern Europe. He called on investors not to miss out on the chance to contribute.

The President also mentioned that Ukraine has all resources to succeed: they are “favorable climate conditions and geographical location, inexhaustible rural and industrial potential as well as our most valuable resource – incredibly creative and very talented people.”

Privatization of state-run companies and tax-free holidays for investors.In 2020 the government plans to sell about 500 state-owned companies. Small enterprises are to be sold through the “Prozorro.Sale” (Prozorro.Prodazhi) system. Large enterprises costing over the UAH 250 million (about USD 10 million) will be prepared for sale by third companies – investment advisors and will be sold through open competition.

“In the first two years we will be granting tax-free holidays to all investors contributing USD 10 million and more to privatization: you will not be paying income tax for five years,” President Zelenskyi said in his address at the World Economic Forum on January 22.

To investors it will save 18 per cent of their income annually.

“Investment nanny”. The state will be striking additionaldeals with big investors that will be investing over USD 100 million in Ukraine’s economy.

“We’ve prepared a program called Investment Nanny. We’ll guarantee a separate contract with the state to each investor that will bring over USD 100 million in Ukraine. The state will be protecting you. You will have a manager who speaks five languages and will work with you 24/7,” Zelenskyi said.

Ukraine’s Minister of Infrastructure Vladyslav Krykliy agreed to become the first “nanny” of a kind. He also called on the World Economic Forum participants to invest in Ukrainian ports, roads, airports and railway stations.

The “investment nanny” is supposed to support investors in Ukraine and help them run their business, will assist them in communication with law enforcement and civil servants, and will step in in case of business hijacking etc.

The Prime Minister of Ukraine Oleksiy Honcharuk said separate international arbitration will be established. It will be considering investment disputes worth USD 10 million and more. It will help attract investment while Ukraine’s judiciary is undergoing reforms.

Zelenskyi also met with representatives of the Cargill company (the US) that deals with investment in agriculture and infrastructure and of the Socar company (Azerbaijan) that sells fuel in Ukraine.

Negotiations with the IMF. President Zelenskyi and the governmental team met with the Managing Director of the International Monetary Fund (IMF) Kristalina Georgieva. It is the first meeting after Ukraine’s President and the IMF chief assumed offices.

Prime Minister Honcharuk noted that negotiations with the IMF were “cool” and said that the new IMF program is to start “in the coming months”.

The International Monetary Fund commented negotiations in a more reserved tone calling them “fruitful” and saying that the need to implement the IMF requirements to continue cooperation was emphasized.

To remind, negotiations on a new IMF program for Ukraine are ongoing since late summer 2019. To continue cooperation with Ukraine the IMF listed preliminary conditions that include adoption of the law on agricultural land market (it is being prepared for the second reading and is to be considered by the Parliament in February 2020) and adoption of the law that will make the return of PrivatBank to its former owners impossible (the draft law has been registered in the Parliament but the MPs have not started considering it).

Deutsche Bahn. During the visit to Davos the government signed a memorandum with the German railways operator – Deutsche Bahn. Memorandum details were not released, while Prime Minister Honcharuk said that corporate management of Ukrzaliznytsia (Ukrainian Railways) will be passed to Deutsche Bahn.

“Yes, we want to pass the railways under the German management for 10 years. Not only this particular infrastructural unit will depend on this important decision. It is an ecosystemic decision made to demonstrate that Ukraine is unprecedentedly open to investment and new standards,” Honcharuk said.

Deutsche Bahn has not confirmed the concession of Ukrzaliznytsia. The company said they agreed to provide consultancy to the Ukrainian government. Deutsche Bahn’s version was later confirmed by the Minister of Infrastructure Vladyslav Krykliy who also did not rule out that over the time the Deutsche Bahn’s role may change.