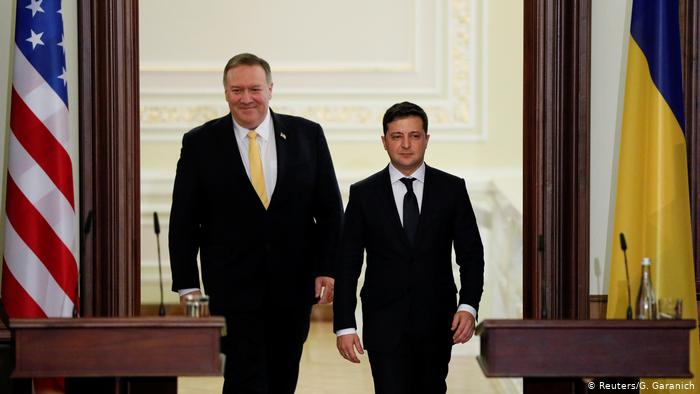 US Secretary of State Mike Pompeo is on visit to Kyiv on January 30-31. He had an official meeting with President Zelenskyi on January 31. The visit is taking place against a backdrop of President Trump’s impeachment trial who is being accused of pressure on Ukraine. Besides, Pompeo’s comments on Ukraine put him at the center of a scandal. UCMC looks out for the purpose and general context of the visit as well as for key remarks the US official made in Ukraine.

Purpose of the visit. As per the US Department of State, the purpose of the visit is to “highlight U.S. support for Ukraine’s sovereignty and territorial integrity.” On Twitter Mike Pompeo said that he travels to the UK, Ukraine, Belarus, Kazakhstan, and Uzbekistan to “affirm U.S. priorities across Europe and Central Asia”.

Ahead of his visit Pompeo told Bloomberg TV in an interview that Ukraine is “a huge trade partner for the United States of America. America has a number of interests with respect to Ukraine.”

He also noted that Ukraine remains a country that sits at the edge between democracy and tyranny adding that the US policy on Ukraine hadn’t changed.

Ukraine is “under enormous pressure from Russia. President Trump has taken actions to counter Russia that President Obama had refused to take. We’ve provided defensive systems for the Ukrainian people so that they can defend themselves. We’ve supported this new leader, President Zelensky, in his efforts to stamp out corruption and to build his democracy. (…) Our policy with respect to Ukraine has been set on the fundamental principles of reducing the footprint of corruption and helping the Ukrainian people build up a democracy while under threat from the Russians in the east and southeast,” Secretary Pompeo said.

Agenda of the visit. In UkrainetheUS Secretary of StateMike Pompeo met with the President of Ukraine Volodymyr Zelenskyi, the Foreign Affairs Minister Vadym Prystaiko and the Minister of Defense Andriy Zahorodnyuk.

Pompeo also took part in the wreath-laying ceremony by the Mykhailivskyi Cathedral honoring the servicemen fallen in Donbas. The US Secretary of State also planned to meet with religious leaders, representatives of the civil society and business leaders.

After his visit to Kyiv Pompeo will travel to Minsk to meet with the Belarus President Aleksandr Lukashenko. The US official will also travel to Uzbekistan and Kazakhstan concluding his visit by February 4.

Remarks by President Zelenskyi. At the joint press briefing President Zelenskyi said he hopes the US will be more actively involved in peace settlement in Donbas and de-occupation of Crimea by designating the official to deal with the above issues.

“It is an emblematic visit that demonstrates consistent and all-embracing support granted by the US to Ukraine. The US has been and will stay our key ally in our defense of Ukraine’s sovereignty and territorial integrity.”

“We are grateful for your position on the war in Donbas and on the illegal annexation of Crimea.”

Pompeo also said that the US will never recognize attempts by Russia to legalize the annexation of Crimea.

The Secretary of State added that since January 2017 the US had supplied military assistance to Ukraine worth of over USD one billion and counting.

The visit against a complex background. Despite the diplomatic remarks that both officials made, the visit is far from being serene. Pompeo planned to visit Ukraine in early January but the complex situation in the Middle East made him postpone the visit.

Pompeo’s visit to Ukraine amid Trump’s impeachment trial may be also an attempt to make sure that “no bad surprises would come from Kyiv.”

Ahead of his visit to Ukraine Pompeo was interviewed by the US National Public Radio (NPR) host Mary Kelly, some of his answers were interpreted as lack of interest to Ukraine.

The journalist said that Pompeo cursed at her when she asked him about the former US Ambassador to Ukraine Marie Yovanovitch. After the interview Kelly had a private talk with Pompeo, he was not happy to have been questioned about Ukraine, cursed at her and asked: “Do you think Americans care about Ukraine?”

Meanwhile the former US Ambassador to Ukraine William Taylor called his op-ed for The New York Times “Yes, Secretary Pompeo, Americans Should Care About Ukraine”.

Taylor reminded to Pompeo that Russia is waging a hybrid war against Ukraine, Europe and the US. He said this war has many components including military aggression, energy supply, cyberattacks, disinformation and election meddling, while Ukraine is at the frontline in each of the battlefields.

Kurt Volker, former US Special Representative for Ukraine Negotiations also gave a “yes” answer to the question on whether Americans should care about Ukraine. In his piece for “Foreign Policy” Volker reassured that Pompeo’s visit in itself confirms the interest in Ukraine. At the same time the diplomat noted that Trump’s impeachment trial has damaged the Ukraine-US relations.

Will Zelenskyi go to Washington? At the press conference in Kyiv Pompeo said that President Trump did not put forward any conditions for the Washington visit of President Zelenskyi including the demand to open an investigation into business activities of Hunter Biden.

“There’s no condition of the nature that you described for President Zelensky to come to Washington and have that visit,” Pompeo said. “It’s just simply not the case.President Zelensky will be welcome to come to Washington when we have an opportunity to do good things for both the Ukrainian people and the American people. We’ll get it done. I’m confident of that,” Pompeo added.

In his turn President Zelenskyi said that his visit would be “the right thing to do for relations of the two countries as well as for Ukraine’s status.”

Commenting on the appointment of the new US ambassador to Ukraine Pompeo said that all diplomatic issues will be solved over the time and respective high-level meetings will be held.