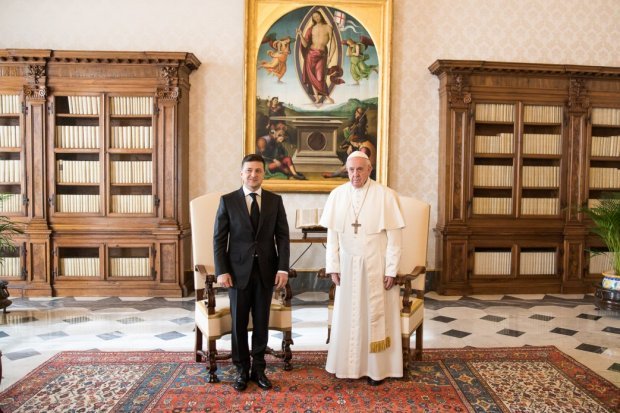 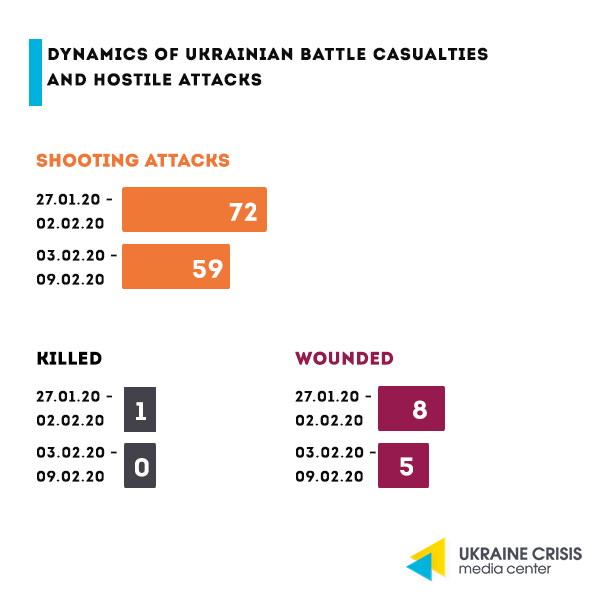 According to the Minister, disengagement was considered by the Defense Ministry, the General Staff, the National Defense and Security Council and by other law enforcement agencies. Zahorodnyuk emphasized that if “the other side” decides to escalate the conflict, “two kilometers won’t make any difference”.

To remind, Russia communicated through its proxies that they are ready for disengagement along the entire contact line if “the sides reach consensus on the addendum to the framework decision and agree on complete reciprocity, mirroring and adherence to all-embracing ceasefire from the Ukrainian side.”

Zelenskyi on visit to Italy: the Ukrainian agenda 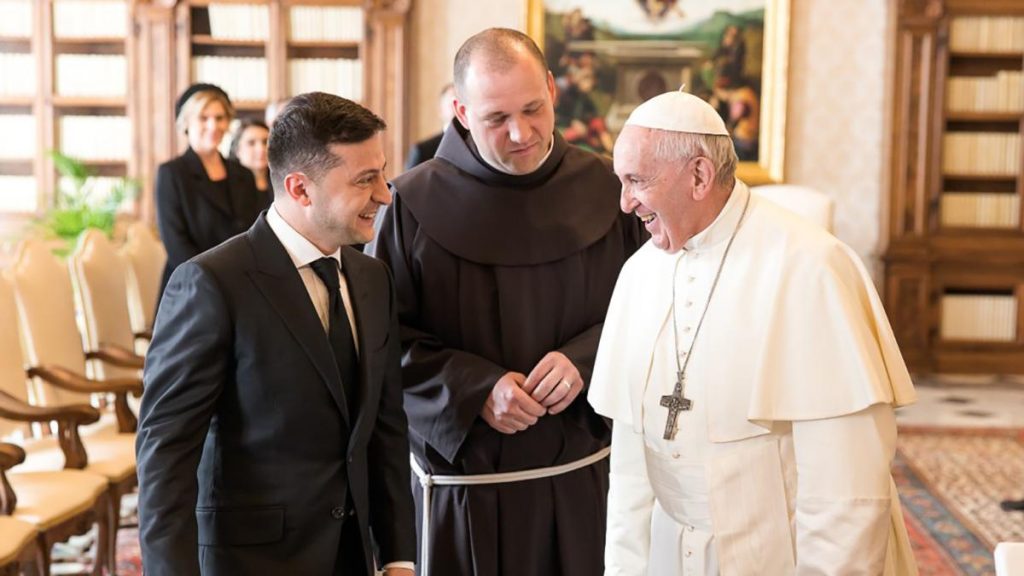 On February 7-8 President Zelenskyi made a visit to Italy. In Vatican he met with Pope Francis engaging in a discussion on peace in Ukraine. Zelenskyi emphasized that Ukraine strives for peace and asks the Holy See and the Pope Francis personally to support and assist Ukaine in settling peace and ending the war in Donbas. Zelenskyi also asked for the Holy See’s assistance in liberating captive Ukrainians.

In Rome when meeting with Giuseppe Conte, Italy’s Prime Minister (President of the Council of Ministers), President Zelenskyi discussed the political agenda including the case of Vitaliy Markiv, serviceman of the National Guard of Ukraine, and closing down of the organizations representing themselves as offices of the so-called “DPR” and “LPR”. The Ukrainian President reconfirmed the intention to deepen bilateral relations with Italy and intensify cooperation in areas of mutual importance.

“Italy is one of Ukraine’s three biggest economic partners in the EU and one of the key trade partners in the world. Last year the trade turnover (between Ukraine and Italy) exceeded USD four billion. I am convinced that we can improve this result and strengthen our friendship,” Zelenskyi said.

He added that Ukraine’s particular interest would be to actively engage Italian investors in large-scale privatization in Ukraine as well as encourage Italian companies to participate in development of Ukraine’s infrastructural projects and energy sector.

Two ex-Berkut policemen return to Kyiv after they were swapped, implications 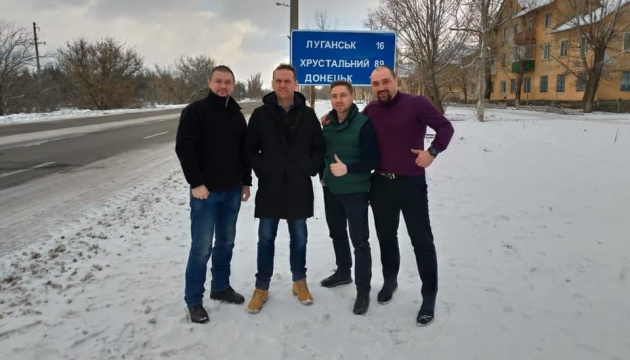 Last week former Berkut policemen Oleksandr Marynchenko and Serhiy Tamtura who were passed to Russia in course of the swap in December 2019, returned to Kyiv. They were charged with killing 58 persons and injuring 80 on Instytutska street in February 2014. “Hromadske” journalist Nastia Stanko took a closer look at the story, we herewith cite her main findings.

How and why did they return? Lawyers of ex-Berkut staff released a photo where they are pictured with their clients in Shchastya – in the near-front zone in government-controlled Luhansk region. Oleksandr Horoshynskyi, lawyer of Oleksandr Marynchenko, also released an appeal in the name of his client in which the former Berkut policemen address the President, the Head of the Parliament and the Prosecutor General. They explain that they had to agree to the swap so that it does not get derailed.

Why they were against the exchange? For Marynchenko it was unsafe to go to the occupied territories as he was fighting in Donbas in 2014 on Ukraine’s side. It did not look like a good idea to go back there.

When asked by “Hromadske” why her husband agreed to the swap, the wife of Serhiy Tamtura said: “Ask Zelenskyi”. She also made it clear that her husband did not want to be exchanged.

Evidence of involvement into Maidan killings. Lawyers of both Berkut policemen – Oleksandr Horoshynskyi and Ihor Varfolomeyev kept insisting that their clients were charged unfairly.

Neither of them provided full-fledged testimony in the four years that the case was considered in court. In one of the court sittings Marynchenko confirmed that he had a gun.

The gun under that serial number, like many others, was destroyed. Nevertheless forensic ballistic tests confirm that two bullets that witnesses found on Instytutska street were fired from Marynchenko’s gun. At the same time there is no evidence demonstarting that the bullets fired from that gun killed or injured anyone.

Serhiy Tamtura said in court that he was on Instytutska that day. However there is no evidence that anyone was killed or injured from Tamtura’s gun. Many bullets are impossible to identify due to damages.

What will happen to the case after the return of ex-Berkut? The court will keep considering the case and can issue a sentence four years after the trial started.

With current evidence Marynchenko and Tamtura will unlikely be sentenced to a term that exceeds the time they’ve already spent behind bars (Tamtura four and a half years, Marynchenko almost five years), also taking into account the so-called “Savchenko law” that equalizes one year of pre-trial detention with two years of the actual sentence. Three other former Berkut policemen – Yanishevskyi, Abroskin and Zinchenko did not return back after the exchange and are probably staying in the occupied territories in eastern Ukraine.

The Markiv case: journalists shoot an investigative documentary to recreate the circumstances of Rocchelli’s death in Donbas 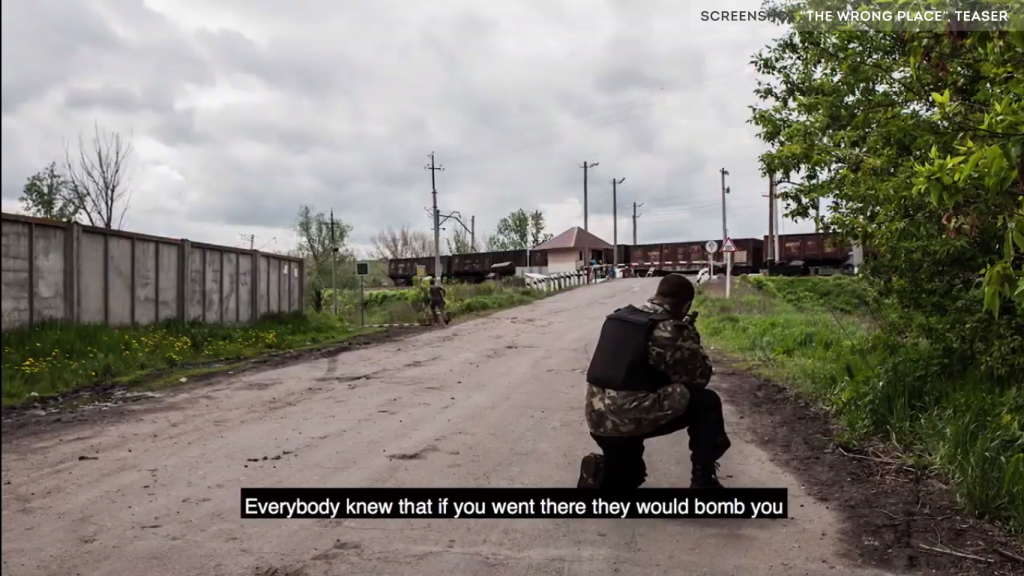 An Italian-Ukrainian group of journalists is shooting an investigative documentary to shed light on circumstances of the death of Italian photojournalist Andrea Rocchelli and of Russian human rights defender Andrei Mironov. In July 2019 a court in Italy sentenced the sergeant of Ukraine’s National Guard Vitaliy Markiv to 24 years in prison having found him guilty of complicity in their murder.

“It may seem like the case is solved but it isn’t. Some loose ends remain. The case has become politicized, it looks like the sentenced soldier who is a citizen of Ukraine and Italy is not a murderer but a scapegoat,” claim the film authors – journalists Cristiano Tinazzi , Ruben Lagattolla, Olga Tokariuk and Danilo Elia in the directors’ statement.

The documentary’s working name is “The Wrong Place”. The film crew is collecting testimony by fellow journalists, as well as by military and civilians who witnessed those events. Journalists were also filming in Donbas to best recreate the circumstances in which Rocchelli and Mironov lost their lives.