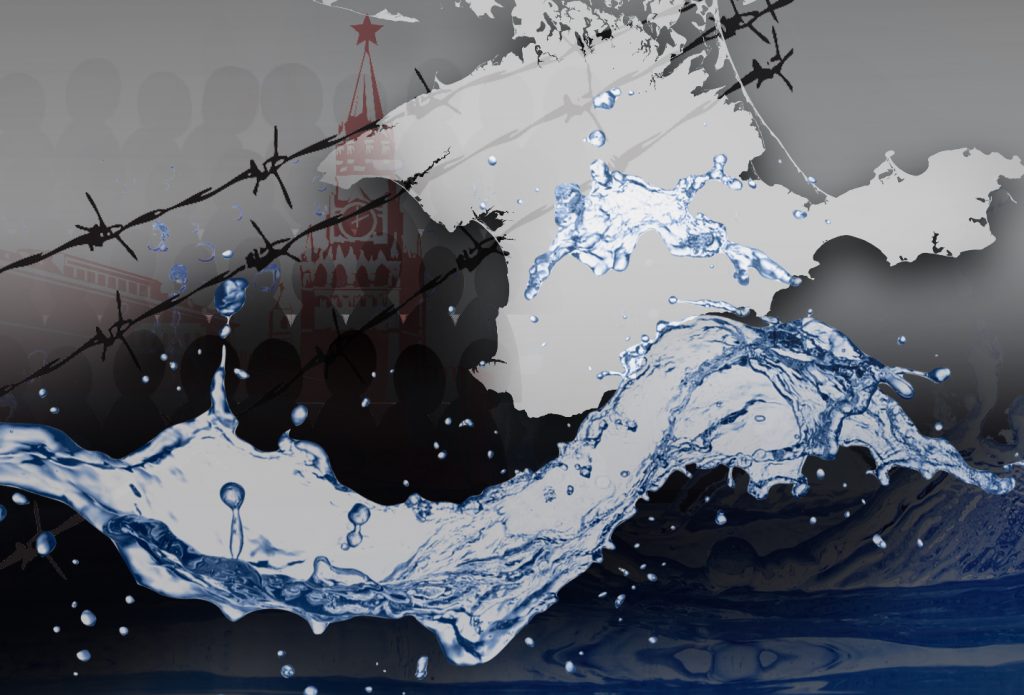 This week Crimea’s water supplies are actively discussed in Ukraine. After Russia occupied Crimea in 2014, water supply to the peninsula through the North Crimean Canal became not just an economic but also a political issue. On February 11, 2020 the head of the faction “Servant of the People” (“Sluha Narodu”) Davyd Arakhamia made a controversial statement supposing that Ukraine might restore channeling water supplies to Crimea. His statement stirred the public discourse causing a strong reaction, the MP later apologized. What the actual state of play of the water supply to Crimea is and which are the possible future scenarios, read on in UCMC’s material.

Current water supplies in Crimea are intermittent. Water reservoirs in the peninsula are lacking resources to be able to provide uninterrupted water supply.

It is planned to supply hot water in the cities on the weekends only, cold water will be supplied during some hours. Russian media claim that Simferopol will have run short of water by May. Key water reservoirs in the region are one-third full, the supplies are enough to cover the needs by June.

According to the deputy director at the Institute of water problems and amelioration of Ukraine Mykhailo Yatsyuk, over 60 per cent of the peninsula’s territory is experiencing “extreme water deficit”, while large irrigated agricultural lands are to turn into a desert.

Waterturned intopeninsula’smaindeficitaftertheannexation.Before 2014 the water from the Dnipro used to cover up to 85-90 per cent of the region’s demand. A month after the Russian invasion, Ukraine stopped supplying water through the North Crimean Canal protesting against the illegal annexation.

Russian de-facto authorities have been installing water intake structures and drilling wells but they never succeeded to resolve the issue. On the contrary, it resulted in soil salinization in Northern Crimea worsening the land’s agricultural potential.

Other projects implying desalination of sea water, sewage treatment, construction of a subsea pipeline that would transport water from Russia through the Black Sea or supplying water over the bridge through the Kerch Strait never came to fruition.

If tourists can be brought by plane, electric power can be supplied from Russia’s Krasnodarskyi Krai, water can be only supplied from mainland Ukraine. Only Kyiv can take this burden off the Kremlin’s shoulders.

The issue is now daunting as autumn and winter 2019-2020 have been scarce of rain and snow fall. It’s not about potable water that should be enough, but about technical water that is used, for example, in agriculture or for military purposes.

Occupational authorities in Crimea admit that the problem is real. Head of the occupational government in Crimea Sergei Aksyonov said that search for additional water resources remains is a top priority.

He added that Crimea will get RUB 20 billion (about EUR 296 million) to reconstruct the Mizhhirske water reservoir, it will allow to get enough water to supply to Simferopol. Some deputies in the Russian-controlled Crimean Parliament do not rule out the possibility of buying water from mainland Ukraine. “Russia is helping Ukraine with gas but why is it not demanding from international organizations that it keeps supplying us water?” asked Valeriy Aksyonov, deputy of the “Crimean Parliament”.

Press secretary of the Russian President Dmitriy Peskov commenting on the prospects of granting Kyiv control over the state border in Donbas in exchange for Ukraine restoring water supply to Crimea, said that “Crimea cannot be subject to bargain.” He though added that suggestions on water supply can be considered. “If there are suggestions on additional water supply, commercial or based on other agreements, they can be considered.”

What do Ukrainian MPs and politicians say?

Ukraine’s position in the past years has been adamant – supplying water in the occupied peninsula is unacceptable. At the same time in the past weeks pro-Russian politicians and several members of the “Servant of the People” party suggested reconsidering the decision.

Davyd Arakhamia, Head of the “Servant of the People” faction in the Parliament. “If we supply water in Crimea and have a big advantage in negotiations on Donbas, my personal position is, I will consider it a fair compromise,” Arakhamia said on February 11. After his phrase went viral and caused a massive negative reaction, he apologized.

MPs from the major party. Even before Davyd Arakhamia’s statement, in early February Yuriy Aristov, MP from the “Servant of the People” faction, head of the budget committee said that Ukraine is considering the prospects of selling water to Crimea. “Israelis are selling water to the country that’s actually at war, they are making money. We also had an idea of selling water to Russia, meaning to Crimea.” Later Aristov said that it was just an idea that has no particular actions behind.

Meanwhile another MP from the “Servant of the People” faction, Crimea-born Yelyzaveta Bohutska is against supplying of water in the occupied Crimea. “Who to sell to? What is the actual status of Crimea? With whom should the agreement be signed? What the other side is up to, if it wants to be buying this water? It’s occupation! Selling water in our territory to the occupants is not acceptable. Let them give us back Crimea and we will gladly supply water immediately. It’s the joint position of the faction,” Bohutska said.

MPs from other factions. MP from the “European Solidarity” (Yevropeiska Solidarnist) faction Akhtem Chyihoz who has his friends and family members living in Crimea, is strongly against the restoration of water supply. “As for our citizens, they do understand that’s what the fight against the occupants is. Representatives of the President’s party saying that that’s their way of caring about their co-nationals is a lie and an attempt to trick the society. What it does is it proves that part of the President’s team from ‘Servant of the People’ party is ready to cooperate with Russia,” Chyihoz said.

Mejlis. Head of the Mejlis (highest representative body) of the Crimean Tatar people Refat Chubarov said the possibility of selling water would only “reinforce the position of the peninsula’s occupation.” “Only after the troops are withdrawn we will open the first gateways. There are no other compromises.” Chubarov added that there is enough potable water in Crimea right now. There can be water scarcity in agriculture and at the Russian military bases.

The newly appointed head of the Office of the President Andriy Yermak said that Ukraine had never discussed with Russia the possibility of restoring the water supply. He added that Davyd Arakhamia’s words are nothing but his own opinion.

What do residents of the occupied peninsula say?

Representative of the Mejlis of the Crimean Tatar people in Krasnoperekopskyi district of the Republic of Crimea Muzaraf Fukala is strongly against Ukraine selling water to Crimea. “The majority of Crimean Tatars is against Ukraine selling water to the peninsula. It will be Ukraine’s betrayal. There are also assumptions that they might free our prisoners in exchange for the water.”

Oleg Sentsov said that people can be exchanged for people only, not for political compromises. The Kremlin’s logic is quite the opposite. Prospects of yet another internal disagreement in Ukraine are on the horizon.

Ukrainians may get to choose between a political decision (restoring water supply in Crimea) on one pan of the scales and a humanitarian stance (return of Ukrainian citizens) placed on the other. Water supply to the peninsula will be presented as a humanitarian act.

It’s clear that restoring water supply in the occupied Crimea will mean Kyiv losing a lever of influence on the Kremlin and Ukraine’s ultimate recognition of the peninsula’s illegal annexation.