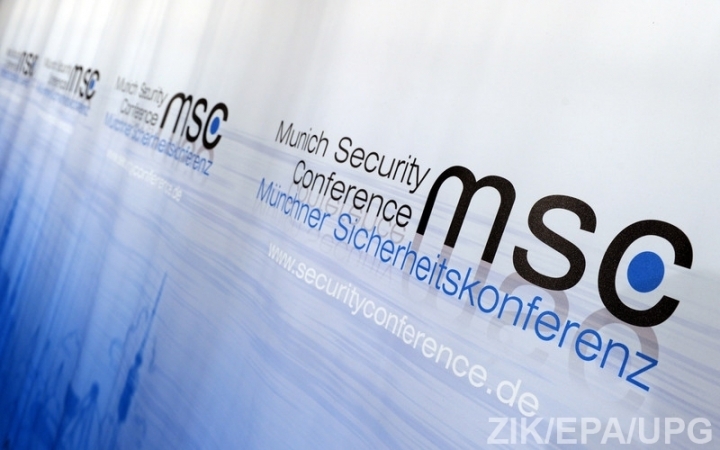 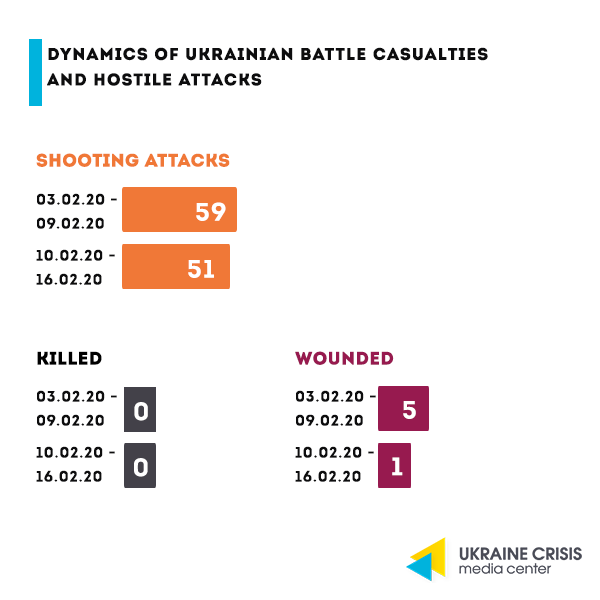 On February 16 in the area of responsibility of the operational-tactic command “Skhid” (East) Russia-backed militants made three attacks upon the Ukrainian troops’ positions. They fired seven 82-mm mortar rounds and heavy machine guns near Lebedynske. They also fired twice from grenade launchers and small arms near Maryinka.

“Twelve Steps toward Greater Security in Ukraine and the Euro-Atlantic Region”: what is wrong with the document

The Munich Security Conference came to a close on February 16.

This year’s conference participants included the Federal President of GermanyFrank-Walter Steinmeier, the Federal Minister of Foreign Affairs of Germany Heiko Maas, the President of the German Bundestag Wolfgang Schäuble, the Prime Minister of Canada Justin Trudeau, the Chancellor of Austria Sebastian Kurz, the Speaker of the US House of Representatives Nancy Pelosi, the US Secretary of State Mike Pompeo and the Prime Minister of Norway Erna Solberg.

The document entitled “Twelve Steps toward Greater Security in Ukraine and the Euro-Atlantic Region” appeared on the conference web site alongside the official conference report.

Being published on the official web site it might have been taken for the official position of delegates and states. In fact it is not, Ukraine’s representatives were unaware of the document’s existence. The confusion owes to the organizers of the Munich Security Conference who posted the document on the web site, while the signature of the Chairman of the Munich Security Conference Wolfgang Ischinger added weight to the statement.

The document actually looked like the official position expressed by the Munich Security Conference, but it could not be one.

Controversial paragraphs of the plan. “Twelve Steps toward Greater Security in Ukraine and the Euro-Atlantic Region” drafted in cooperation with Russians openly suggests the paragraphs that are downrightly unacceptable to Ukraine. They include the suggestions to launch a new “national dialogue about identity” drawing on Russia’s standpoint on history, language and national memory; to create a “roadmap” for lifting sanctions imposed on Russia even before it implements Minsk in full; to restart approximation between the EU and the Russian Federation without demanding de-occupation of Crimea and, generally, to restore full-fledged relations between the West and the Kremlin as well as other quite controversial paragraphs.

Those positions are unacceptable to Ukraine, they also caused a strong negative reaction by both representatives of Ukrainian authorities and civil society.

On Friday February 14, when it was morning time in Washington, Atlantic Council published a detailed answer to the plan. The text was signed by many representatives of the US diplomatic elite including two former Deputy Under Secretaries of State, former US Ambassadors to Ukraine and Russia, former NATO Deputy Secretary General etc.

Who is the mastermind behind the plan? Organizers that prepared the plan are three western think-tanks and a Russian one. The Russian organization – the Russian International Affairs Council (RIAC) is hardly independent from the country’s authorities – it is co-founded by the Foreign Affairs Ministry of the Russian Federation and is chaired by Foreign Minister Lavrov’s predecessor Igor Ivanov. Besides, the document was signed by 40 more individual experts and former politicians. Among them there are three Ukrainians. One of them is Vasyl Filipchuk, senior advisor at the International Center for Policy Studies, a former diplomat, who became widely known in 2017 as the author of the “Nine steps to settlement of the conflict with Russia” where he suggested among the rest to “accept giving up of NATO membership” along with security guarantees that the US and the Russian Federation would provide to Ukraine, “install a moratorium on the status of Crimea”, “lease Sevastopol to Russia for 99 years”, get to the joint economic integration to the EU with Russia etc. At the time when the “Nine steps” were released they were met with harsh criticism by the expert community, the initiative did not last.

To publish or not to publish: the document’s adventures. The plan that caused a strong reaction in Ukraine was published on February 14, shortly before the conference start. Its paper version was distributed among the conference participants and placed on tables at the hotel that hosted the event. By the end of the day all of a sudden it all changed: the plan disappeared from the web site of the Munich Security Conference and was quickly removed from the hotel tables.

Chairman of the conference and the mastermind behind the plan Wolfgang Ischinger was explaining to Ukrainian officials who were addressing him that it was a mistake to release the plan under the conference logo. He was not denying the fact that he signed the notorious initiative but explained that it is his private position.

In the evening on February 15 the document returned to the web site and became available again at the old address as if it never disappeared. On February 16 it became unavailable. The German-language version was never changed, so that the German audience had all grounds to consider that the Munich Security Conference that had Ukrainian participants as well supports the idea of giving up Ukraine’s interests to please Putin.

The English version did not disappear either – it changed the title and the address. Turns out Ischinger accepted a small compromise: he recognized that suggestions that he lobbied caused ambiguous feedback and added an alternative position (to the English version only) – that drafted from across the Atlantic Ocean.

“I have always been a little offended regardless of all the assistance that other states provide us with in this situation, whether it’s economy or reforming the country, when Ukraine is discussed and issues are solved behind our back. That’s what also happens to the plan you mentioned. In Munich they found a new plan how to settle the war in eastern Ukraine. What about us? It’s us having the war. I would just like to remind that we can be asked about it.”

Apart from commenting on the notorious plan President Zelenskyi made an address and took questions. We’ve collected the main points.

The war not in Ukraine but in Europe. “I would like to draw your attention to the fact that it’s not quite correct to say ‘the war in Ukraine’. This war is in Europe. Together with the annexation of Crimea it lasts as long as World War II did, just imagine. We want to stop this war like no one else. We will be happy when Ukraine will no longer be mentioned in international reports as a dangerous zone. It must happen only when the lasting peace settles in Donbas and Ukraine restores its territorial integrity within its internationally recognized borders, when our people, Ukrainians are back and so do our territories – Donbas and Crimea.”

Ukraine has the right to claim inefficiency of international security rules and demand more support. “Ukraine has been always making a considerable contribution on the way to international security. It became one of the founding members of the UN. It gave up its nuclear weapons, instead in the 21stcentury it lost part of its territory and keeps losing its nationals. So that today Ukraine has all rights to speak of inefficiency of actual international rules and of the need to rethink and reconsider them. We are a country that has experienced directly that the current world architecture is imperfect and existing institutions are not working as efficiently as today’s needs are demanding them to.”

A dialogue with Donbas people not militants.“We are ready for a dialogue with peaceful residents of these territories, not with those who are not recognized from the standpoint of international law and thus cannot represent Ukraine’s local population.”

Elections in the occupied territory come only after security conditions, control of the state border and are held by Ukrainian law. “Our wish today is to hold local elections all across Ukraine in October 2020 including the defined districts of Donetsk and Luhansk regions. We would also like (to hold the elections) in the territory of Crimea. Doing it without basic security and political conditions violating the Constitution of Ukraine and international standards for democratic elections is impossible for us.” Elections “cannot be held not in accordance with the Ukrainian law, under the shots fired and without us having control over our border.”

Security of humanity is more important than geopolitical ambitions of the biggest states. “It is impossible to build new world rules founded on liberal values if only selected countries are invited to build that have nuclear weapons or a certain level of economic development. Problems of humanity must be solved by all representatives of humanity.

It is not possible when geopolitical ambitions or reluctance to give up one’s economic interests are placed higher than human security. It’s time to remember that continents on our planet are not “markets” or “trade areas” in the first place. They are home to seven and a half billion people.”