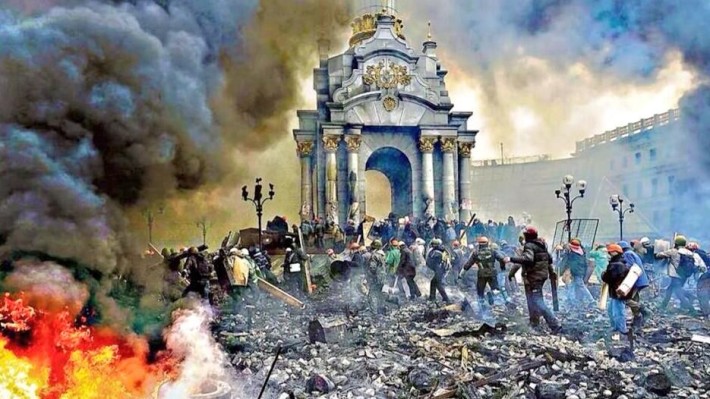 On February 18-20 Ukraine commemorated the Maidan’s bloodiest three days that took place six years ago. On February 20 alone 48 persons were killed on Instytutska street by snipers, 80 got wounded. In those three days 78 protesters and 13 policemen lost their lives. Over the last year the Ukrainian society felt that the official narrative on Maidan events has been gradually but systematically changing. We look in what ways it has changed as well as at the investigation progress and at the changing perception that Ukrainians have of the events that took place in the winter of 2013-2014.

After Ukraine got a new government in 2019 – after election of President Zelenskyi and of the new Parliament in which the President’s party took the majority of seats, changed attitude to the events of the winter of 2013-2014 became tangible. Those events are a starting point of Ukraine’s newest history for the most active part of the society. The new rhetoric taken by the authorities, the slow pace at which the investigation advances and the revenge of Maidan opponents are becoming more and more tangible in the Ukrainian society.

The new official rhetoric. In recent months the new rhetoric and the new attitude on the part of the authorities is tangible. Authorities seldomuse “Maidan” as a word and purposefully avoid it (same concerns the phrases “Russia as the aggressor” and “the war against Russia” on different motives though). They also avoid giving meaningful descriptions of Maidan events. What it possibly shows is that the changes that brought the Revolution of Dignity are of interest neither to the authorities, nor to part of their voters.

Within the party “Servant of the People” (Sluha Narodu) there are both ardent supporters of the Revolution of Dignity and its open opponents. The latter include MP Maksym Buzhanskyi. In a comment to the Ukrainian medium “Novoe Vremya” (New Times) he said neither the faction, nor the leadership of the “Servant of the People” party had a problem with that.

Zelenskyi’s team is trying to win the hearts of both groups and of the third one as well, sociologists say. The President has no clear-cut position, not just on Maidan but also on many other events and processes. His neutrality fuels hopes of the revanchists.

Justice not served: no punishment coming. The fundamentals of today’s revenge come from no punishment to Maidan opponents, even to those who were directly shooting at the protesters on Instytutska street.

To remind, after Viktor Yanukovych fled in February 2014, his allies either followed him or stayed quietly in Ukraine. Even those of them who had the parliamentary immunity, did not dare to openly oppose the new authorities. They were not impeding the investigation into the Maidan cases led by the specially created team – the department of special investigations of the Office of the Prosecutor General chaired by Serhiy Horbatyuk.

During Poroshenko’s presidency the investigation was often slowed by the Office of the Prosecutor General and the Ministry of Interior. “Investigations and court trials were efficiently blocked with hands of [former Prosecutors General Yuriy] Lutsenko and [Viktor] Shokin and [Interior Minister Arsen] Avakov and others,” said Vitaliy Titych, lawyer of families of Heaven’s Hundred. There was an unwritten agreement between former Berkut policemen and the new Interior Minister Arsen Avakov that former Berkut policemen can avoid persecution and punishment if they agree to go and fight in eastern Ukraine.

Back in 2014 the former commander of a special unit of Berkut Dmytro Sadovnyk fled to Russia while on house arrest. Three years after four more ex-Berkut policemen from Kharkiv fled the same way.

Experts involved say that the investigation was advancing with difficulties. “Investigation of the crimes against the protesters would not be possible if not the active position by the victims, civil society, witnesses and journalists,” explains Yevhenia Zakrevska, lawyer of families of Heaven’s Hundred.

Since Zelenskyi took office, the situation has been deteriorating. There is no end in sight for the investigation and the court trials in Maidan cases. The department of special investigations of the State Bureau of Investigation (DBR) that took over from the Office of the Prosecutor General assumed investigation powers in the 42 criminal proceedings in Maidan cases. Materials of the case exceed 6,5 thousand volumes. Families of Heaven’s Hundred consider dissolution of the department chaired by Horbatyuk a political decision made to ultimately bury the case.

Exchange of five charged Berkut policemen in December 2019 is the most notorious case on the list. The trial was standing closest to the end, it has been on since May 2016 led by Svyatoshynskyi Kyiv district court. Five Berkut policemen were charged with abuse of power, illegal handling of weapons, premeditated murder and inflicting physical injuries upon Maidan activists. The sentence was expected to come in 2020.

In late December 2019 Ukraine swapped five former Berkut policemen within a bigger group of prisoners with Russia. In early February two of them returned to Kyiv, they said they would be “demanding the truth”.

Read also: “Ukraine and Russia’s proxies exchange prisoners: who is on the list?” and “Two ex-Berkut policemen return to Kyiv after they were swapped, implications”

Anti-Maidan rhetoric reinforcing in the media. The discourse of justifying the actions of Berkut policemen was brought up by television channels “Newsone” and “112” that became Medvedchuk’s asset during Poroshenko’s presidency. The TV channels gave former MPs of the “Party of Regions” Olena Bondarenko and Hanna Herman, and former Minister of Justice Olena Lukash public visibility by often inviting them to their shows after a long time that they were staying in the shadow. Later one of the TV channels started a show hosted by Vyacheslav Pikhovshek who used to be one of the voices of Yanukovych’s team back in times of the Orange Revolution.

On February 18, 2020 the TV channel “Newsone” owned by Taras Kozak, MP in the “Opposition Platform – For Life” (Opozytsiyna platforma – Za zhyttia) and a close ally of Viktor Medvedchuk, broadcast the hour-long evening show focused on the killings on Maidan.

The recurring theme of the show were words by Mykhailo Dobkin who used to be an ally of the runaway President Viktor Yanukovych: “[During the Maidan] boys from law enforcement agencies acted as true heroes who fulfilled their military and man’s duty till the end.”

Dobkin also made a forecast that on the 10thanniversary of the revolution Berkut policemen charged with killing Maidan activists will be welcomed in the studio as heroes.

The actual anti-Maidan rhetoric is called to plant the idea in the heads of TV viewers and readers that everything was ambiguous during the protests. The voices ringing in television shows supporting pro-Russian narratives are in try to fill the information space and distort the actual memory of Maidan.

Revenge attempts: the return of the “Party of Regions”, the influence of Medvedchuk. After the 2019 Presidential elections former Yanukovych-time official, lawyer Andriy Portnov returned in Ukraine. His claims on alleged Poroshenko’s crime flooded the State Bureau of Investigation.

It also triggered other politicians who earlier supported Yanukovych. They turned into active TV show participants or became TV hosts.

The “anti-Maidan camp” is largely inspired by Viktor Medvedchuk’s example. Godfather of Medvedchuk’s daughter is the Russian President Vladimir Putin. The MP has been long freely travelling to Moscow and visiting the Kremlin as well as spoke negatively about the people and events that overthrew Yanukovych’s regime. “The country has actually lost its sovereignty, independence and is now governed from the outside, it keeps existing not living,” Medvedchuk told “Novoe Vremya” ahead of the sixth anniversary of killings of Instytutska street.

The State Bureau of Investigation: suggestions to revoke the law on prevention of protesters’ prosecution. Political turnaround of the new authorities and de-glorification of Maidan events reached its climax as the acting director of the State Bureau of Investigation Iryna Venediktova released a statement to the sixth anniversary of the Revolution of Dignity. Venediktova is convinced that in order to secure just and honest investigation of Euromaidan cases the law on prevention of prosecution of Maidan participants of 2014 has to be revoked.

To remind, on February 21, 2014 the Parliament passed the law preventing prosecution of Maidan protest participants detained during various episodes.

According to Venediktova the law contradicts the Criminal Code and impedes objective investigation into the killings of law enforcement staff.

“A total of 78 protesters and 13 policemen were killed. From the standpoint of justice we have to also remember the 13 law enforcement staff members that were following orders. If those orders had been illegal, those who gave them need to be held liable. If we want a just and honest investigation, this law needs to be revoked.”

“We also drafted a law on trial in absentia (…), otherwise we cannot proceed. I understand that this initiative does not have wide public support, as anyone can be tried in absentia. But, I repeat, otherwise we won’t be able to progress (in Maidan cases – edit.).”