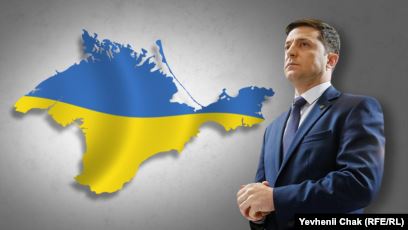 Ukraine observes the sixth anniversary of the illegal annexation of Crimea. In late February 2014 the peninsula was seized by Russian troops. To mark the tragic events the “Age of Crimea Forum 2020” was held in Kyiv. Leaders of Crimean Tatar people, Crimeans – former political prisoners as well as Ukrainian politicians attended the event. President Zelenskyi made a special address. Against a backdrop of doubt that part of the civil society has about the new authorities’ position on Crimea, the address was particularly important. UCMC highlights the key points of the presidential address.

On February 26, 2014 representatives of the Mejlis (a Crimean Tatar authority) rallied by the Parliament of Crimea in support of the territorial integrity of Ukraine. It came as a response to the so-called “green men” – camouflaged men without insignia, flooding the peninsula.

Six years after, the President of Ukraine Volodymyr Zelenskyi said that the return of Crimea is part of the Ukrainian national idea and reassured that Kyiv will not recognize the annexation of the peninsula by Russia in exchange for peace in Donbas.

The return of Crimea as national idea. “I would like to start from simple and obvious things – from axioms that don’t need to be proved: there are seven days in a week, planet Earth is round and Crimea is Ukraine. In our society many issues are disputable but this one is not subject to quarrels or doubts, Ukrainians are 100 per cent united in their position. So the return of Crimea is an undisputable part of our national idea,” Zelenskyi said.

“We will make each and every effort for the Ukrainian flag to fly above Crimea. It is indeed a very complicated task that unfortunately cannot be resolved tomorrow but there are things that we can and must do already today.”

Tactical tasks. As per Zelenskyi, the first thing to do today is to support the citizens residing in Crimea or having registration in Crimea. He explained that throughout the years of occupation to get a birth certificate Crimeans needed to undergo a complicated court procedure, same concerns opening a bank account or taking a loan. The government started to actively address these problems just recently.

Among other tasks outlined by the President is liberation of Crimean political prisoners, Ukrainian broadcasts in Crimea, comfortable crossing points and opening of a big “hub” at the Chonhar crossing point that will provide administrative services.

Zelenskyi added that he agreed with the President of Turkey on a project that foresees construction of 500 apartments for internally displaced persons, construction area will be defined in the coming days.

Full-fledged peace will settle in Crimea. Head of the state is convinced that there will come a day when Crimea is Ukrainian again and “our champion Oleksandr Usyk will hold a boxing fight in Sudak, Jamala will give a concert in Koktebel, Oleg Sentsov will present his new film in Yalta and Mejlis of the Crimean Tatar people will be able to return to its office in Simferopol on Shmidta street 2, to its original, legal premises.”

“We will celebrate this day by the monument to Lesia Ukrainka in Yalta and to Ismail Gasprynskyi in Simferopol. It will happen for sure. The whole world wants it to happen. The full-fledged end of the war will happen in Donbas and the full-fledged peace will settle in Crimea,” Zelenskyi said.

“On this day six years ago the biggest rally gathered in Simferopol to support the territorial integrity and unity of our country. To commemorate the courage and heroism of all participants of the rally, I am signing today the decree introducing the Day of Resistance against the Occupation of the Autonomous Republic of Crimea and the city of Sevastopol. This day will be marked annually on February 26.”