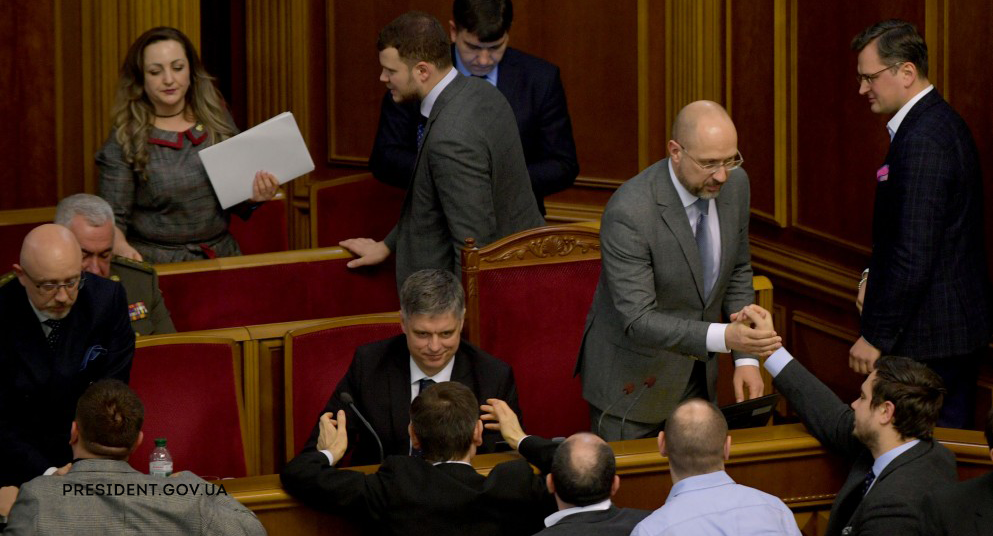 At an extraordinary parliamentary meeting on March 4 MPs voted to dismiss the government that sat for six months. They then appointed a new cabinet – a new Prime Minister and new ministers. A few ministerial positions are still vacant. On March 5 the Parliament voted to dismiss the Prosecutor General who was also in office for six months. UCMC looks into why the cabinet was reshuffled and the Prosecutor General dismissed in try to project the implications for Ukraine and predict the future scenarios.

Rumors on a political crisis and on possible changes in the government started circulating a few months ago. In January 2020 Prime Minister Honcharuk was about to resign but President Zelenskyi “gave him another chance” and kept him in office. For some time the option on the table was “to reinforce the government” by changing some ministers and creating new vice prime ministers’ positions within the cabinet. In the end the President and his majority in the Parliament chose the most radical scenario – to dismiss the entire cabinet and to create a brand new one.

The dismissed government was completely formed by the “Servant of the People” (Sluha Narodu) party and by President Zelenskyi personally. The latter mentioned the Prosecutor General Ryaboshapka as a “100 per cent my person” back in summer. The governmental program was endorsed by the Parliament and the cabinet had one-year immunity. The parliamentary opposition including Poroshenko’s “European Solidarity” (Yevropeiska Solidarnist) party, Tymoshenko’s “Batkivshyna” (Fatherland) party and “Holos” (Voice) by no means initiated the government reshuffle. It comes as a result of political power struggle within the major party.

What did Zelenskyi say in the Parliament?

The President said he is convinced that the government’s performance was unsatisfactory when addressing current problems like the decrease in budget revenue, industry decline, countering the risks of the coronavirus outbreak, miners’ salary debts, undelivered promises to decrease the bills etc. He also said he doubts if the government would be able to cope with the risks of global economic crisis for Ukraine.

Zelenskyi said the cabinet had its achievements but they turned to be too few. “New brains and hearts are needed,” he said.

He added that there is an impression that the economy “was accelerating but then stumbled and risks to fall facedown on the ground.” Zelenskyi also brought up the undelivered budget revenue of about UAH 16 billion (approx. USD 642 million) in the first two months of the year, UAH 13 billion (approx. USD 522 million) of which failed to come from customs duties. Smuggling “knocked out business”, Zelenskyi said.

He also recalled the five-per-cent industry decline observed for the fourth month in a row, communication failure and a scandal with bonus payment to high-level officials.

He also mentioned the medical reform and hinted that it would possibly make sense to wait with its advance. The reform set to change the daunting situation in healthcare is now at risk of being suspended.

What is actually going with Ukraine’s economy?

Ukraine’s Hryvnia rate and budget deficit. In the first two months of 2020 the budget ran short of revenue. In January the revenue was 25 per cent lower than expected, in February – about five per cent lower. Why did it happen that way? When the 2020 budget was planned the government based their calculations on a higher US dollar exchange rate – UAH 27,5 per one USD, while the actual exchange rate in January and February was UAH 24-25.

The US dollar exchange rate is key to the budget, the customs duty revenue depends on it as the customs clearance fee is calculated in Hryvnia as an equivalent to the price of the goods in US dollars. The lower the USD exchange rate is, the cheaper imported goods are and the smaller the import duties on them are.

Government bonds and coronavirus. Until the 2020 budget is not revised, the state can cover the budget “hole” only by borrowing money in the marketplace. Meanwhile coronavirus has caused panic across the global markets. Investors started selling en masse the risky assets – company shares and government bonds of developing countries. In turn, it affected Ukraine: the demand on Ukraine’s government debt decreased and it kept becoming more and more difficult for the Ministry of Finance to be borrowing money at a low interest rate in the long term.

In the long run the coronavirus outbreak can cause an economic crisis in Ukraine and affect the trade. Since Ukraine’s biggest trading partner is China, Chinese economy slowing down can cause the import decline (budget revenue will then decline as well) and export decline (causing a decrease in the inflow of foreign currency and devaluation of Hryvnia).

The IMF. What further complicates the economic situation and the problem with the government finance is the fact that Ukraine has not been granted a program by the International Monetary Fund. The previous Stand-By Arrangement by the IMF ended in February, the new one was being negotiated by Honcharuk’s government throughout its six-month term in office. Still the agreements haven’t translated into a tranche that Ukraine would receive.

The main obstacle to have the new IMF program for Ukraine endorsed is the fact that the draft law no.2571 forbidding the return of once nationalized banks to its former owners has not been approved. The need for such a law stems from the court trials initiated by Ihor Kolomoyskyi trying to appeal the nationalization of PrivatBank.

The change of the cabinet can become an obstacle in the negotiations with the IMF. The primary ministry responsible for relations with the Fund is the Finance Ministry, its head was changed. The new Finance Minister Ihor Umanskyi often criticized the IMF in his comments to the media claiming that Ukraine needs “to approach the IMF harsher and not to agree to some of its demands.”

After Denys Shmyhal was appointed the new Prime Minister the MPs also approved the new composition of the government voting for the entire cabinet. Not all seats were distributed: the posts of the minister of economy, agriculture, education and culture are still vacant. It is quite in the light of the President’s statement that economic problems were key to changing the government.

Why now? The power of ratings

There seem to be no obvious reasons for the government to resign now. Everyone understands that six months are not sufficient to assess the cabinet’s accomplishments. It understandably takes longer for economic and social transformations to happen.

The problems that Ukraine is facing were not created yesterday, they do not come as a result of the government’s six-month work. Similarly the achievements will become evident much later if let be completed. The law actually grants one-year immunity to the government as the processes predictably take long. So, objective figures are not the reason for the cabinet reshuffle.

A more probable explanation is that Zelenskyi could not stay away from addressing the drastic decrease in his approval rating and in approval ratings of his party and his cabinet. It’s quite possible that the results of public opinion polls that recorded the fall of trust in the President and in the government became the last drop.

It’s obvious that Zelenskyi would not need to worry about the ratings – as he repeatedly stated that he will stay in office for one term.

Some experts are convinced that the government reshuffle is the oligarchs’ revenge in action. Honcharuk’s government tried to distance itself from financial and industrial groups and, particularly, maintain a firm position on Ihor Kolomoyskyi.

Thus, a source close to Honcharuk told media that he was dismissed because of the rotations he made in “Centerenergo” – Honcharuk’s appointments were disapproved by Kolomoyskyi. The source claims new high-level appointments to “Centerenergo” and to three more regional energy companies became one of the main reasons to dismiss Honcharuk.

Among other oligarchs dissatisfied with the government line wass also Rinat Akhmetov. Before his ministerial jobs Denys Shmyhal, the new Prime Minister and former Minister for Development of Communities and Territories, used to work as a top manager at Akhmetov’s DTEK company.

Zelenskyi’s approval rating is directly linked to TV channels owned by the oligarchs. It is quite possible that they could have made it clear to Zelenskyi that the fall of his approval rating can last.

It is also possible that the President’s dependency on public approval that has no rational explanation pushes him to be seeking a new deal with the oligarchs.

Why was the Prosecutor General removed?

On March 5 Rada (Ukraine’s Parliament) passed a no-confidence vote in the Prosecutor General Ruslan Ryaboshapka whom in the notorious telephone conversation with President trump Zelenskyi referred to as a “100 per cent my person”. The motion was supported by 263 MPs, 179 of them are members of the “Servant of the People” faction. Ryaboshapka was in office for six months. He held a cleanup in the agency at the central level and started performance reassessment at local level. Was Ryaboshapka standing in someone’s way? 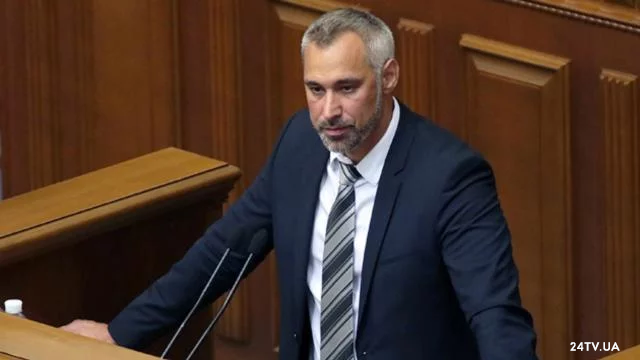 The case of PrivatBank. Ryaboshapka’s removal from office is absolutely beneficial for Kolomoyskyi. Ryaboshapka passed to the National Anti-Corruption Bureau all proceedings pertaining to PrivatBank including the investigation into possible withdrawal of funds by former owners ahead of the nationalization. The former Prosecutor General recently said that there is a progress in those cases as well as in the investigation into fraudulent schemes in “Ukrnafta” that also falls into Kolomoyskyi’s area of interests.

The Prosecutor General then said that police will have to work harder on this case. “Additional evidence needs to be collected for the case to be passed to the court. The evidence collected is not enough,” Ryaboshapka said.

Poroshenko’s case. “Spring has come – we’ll be jailing them” is one of the slogans of Zelenskyi’s presidential campaign. In a few months he will mark his first year in office. However there are no clamorous high-level sentences that he could boast about to his voters.

The Office of the President demanded that all law enforcement agencies came up with high-profile cases. Thus, the State Bureau of Investigation drafted charges against Petro Poroshenko but the Prosecutor General refused to sign the document explaining that both the document and the case itself were made heavy-handedly. Part of Zelenskyi’s team accused Ryaboshapka of playing into the interest of the former President.

The case against Poroshenko made Zelenskyi’s allies doubt Ryaboshapka’s loyalty.

The State Bureau of Investigation prepared charges against the former President for the alleged abuse of power. He was to be charged with illegal appointment of two members of the Higher Council of Justice and of the first deputy head of the External Intelligence Service Serhiy Semochko. According to RBK-Ukraina, Ryaboshapka kept refusing to sign the document saying that “the case is raw” and will fall into pieces in court.

Ahead of the Prosecutor General’s dismissal the head of the “Servant of the People” faction Davyd Arakhamia said that the episode in question was likely “the last drop”.