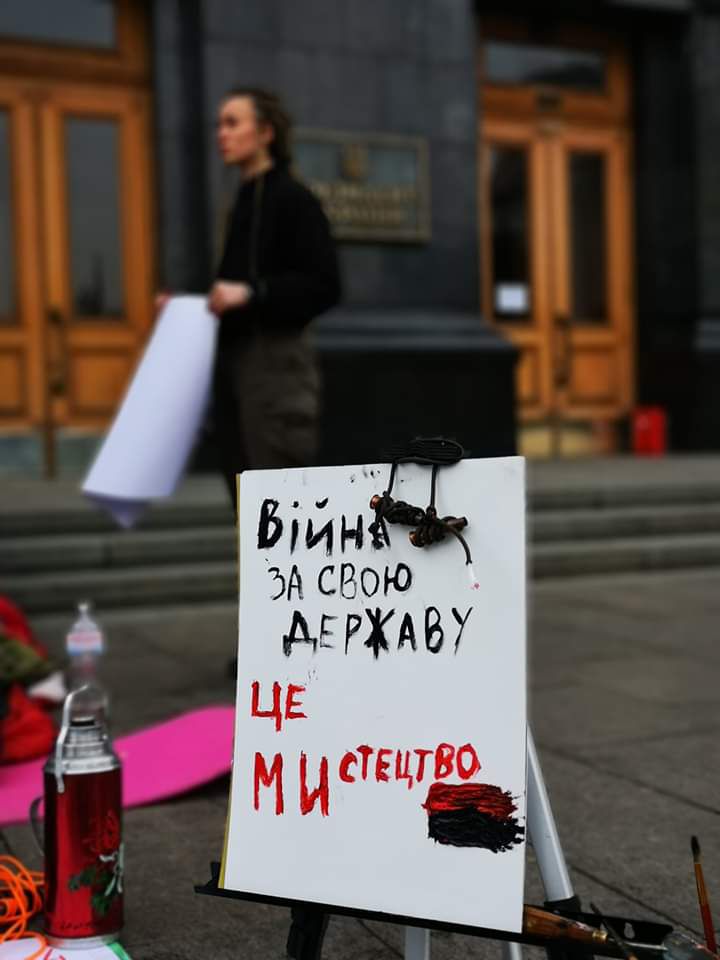 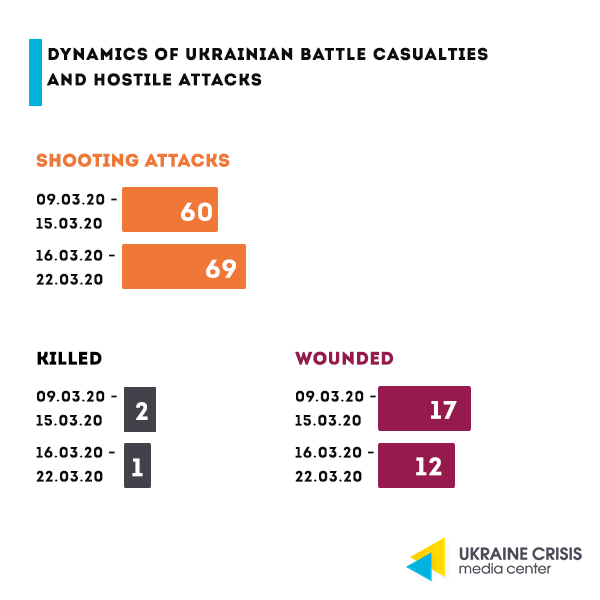 On March 17 and 18 Russia’s proxies fired at the disengagement site no.3 Bohdanivka-Petrivske from automatic grenade launchers and small arms. Ukraine’s Joint Forces did not return fire adhering to the ceasefire. 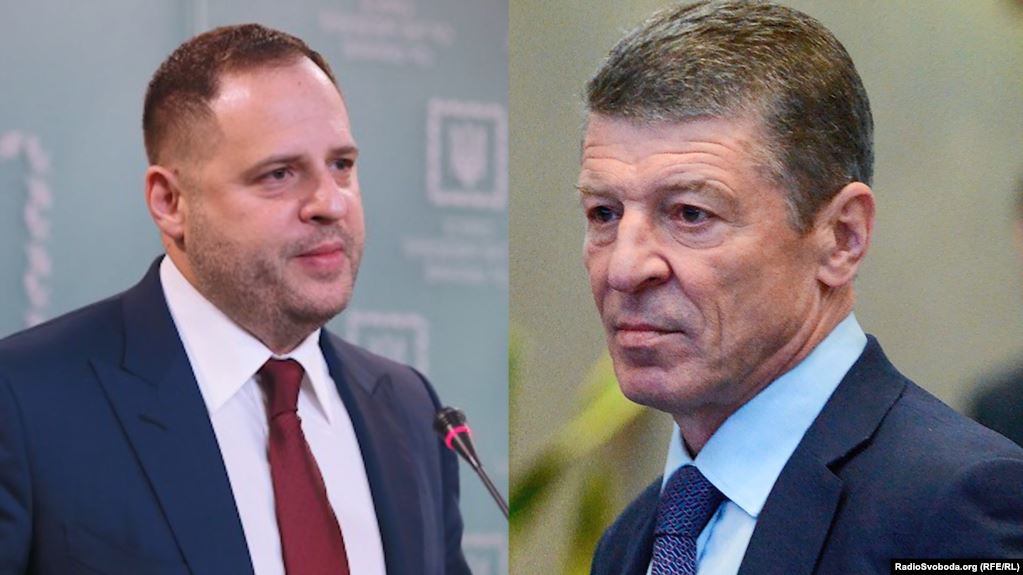 Next meeting of the Trilateral Contact Group was scheduled for March 25, it is where they planned to get an agreement signed to establish the Consultation Council featuring representatives of the occupied districts of Donetsk and Luhansk regions.

Agreement to create the Consultation Council that was made in Minsk on March 11 between the Head of the Office of the President of Ukraine Andriy Yermak and Deputy Head of the Presidential Administration of the Russian Federation Dmitriy Kozak, met sharp criticism in Kyiv. Thus, the decision is seen as transition to direct talks with the occupation administrations in the uncontrolled areas.

What’s known so far is that the negotiations scheduled for March 25 will be held via video conference due to the coronavirus outbreak. The news was confirmed by the spokesperson of the Foreign Affairs Ministry of Belarus Anatoliy Glaz. It is likely that no agreement will be signed on March 25.

“Spring on Granite”: a protest outside the Office of the President that is on for 10 days 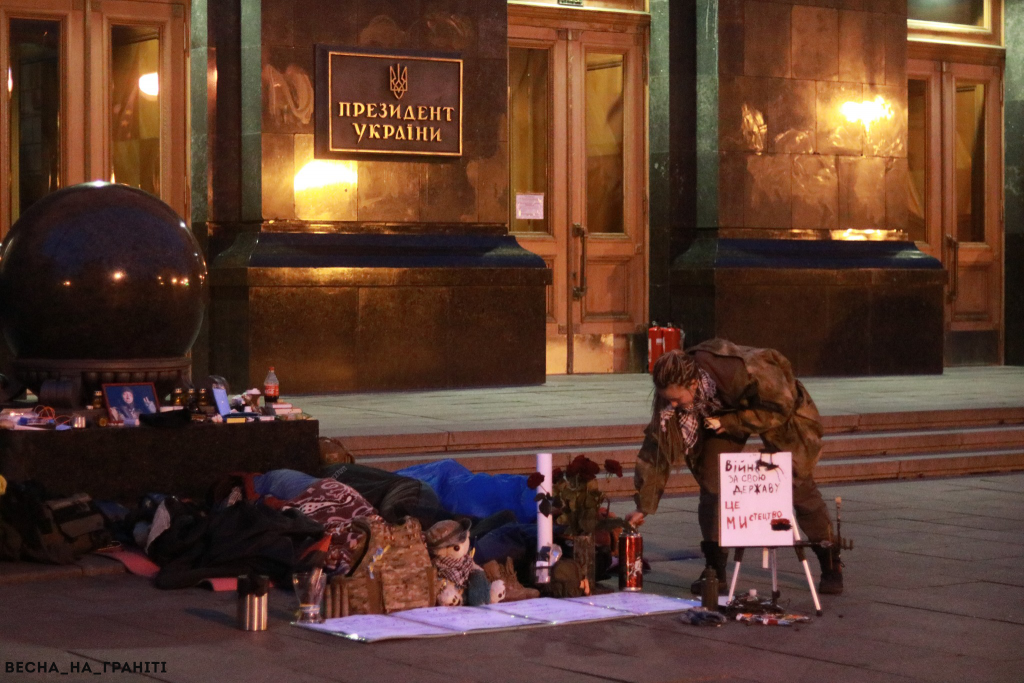 While the entire country is under lockdown, there is a protest happening outside the Office of the President for 10 days against the latest decisions made in Minsk, particularly against the establishment of the Consultation Council. (Check out our Weekly Update #10 for details).

Veterans of the Russian-Ukrainian war, combat and army supply volunteers, civil society activists and others are part of the protest.

Ideator of the action is Yaryna Chornohuz, a Ukrainian medic, volunteer at “Hospitaliery” combat medicine unit. Yaryna holds a degree in linguistics, she has a small daughter. Chornohuz spent quite a while on the frontline, two months ago she lost someone she loved at war – the serviceman was shot dead by a sniper.

Participants say their action is continuous and is called “Spring on Granite 2020”. The name refers to the Revolution on Granite of 1990 when students achieved the change of the government form, high-level resignations and state independence.

Protesters stay outside the Office of the President 24/7. They respect the sanitary regulations introduced during the quarantine and do not call for a massive protest.

Against withdrawal of troops. Authors of the manifesto are standing against the withdrawal of Ukrainian troops from the contact line.

“For us the land from which Zelenskyi is withdrawing the Ukrainian army is not just a piece of territory. It is the land where our brothers-in-arms, friends and lovers were killed. For us their deaths are not an ordinary message from the newsfeed but an actual significant loss that is felt as long as we live and that our enemy, Russia, has to pay for,” the manifesto reads.

Against the Consultation Council. The manifesto expresses a clear-cut position on the agreement of March 11, 2020 that is to establish the Consultation Council, a move that will actually start a direct dialogue of Ukraine with occupation authorities in ORDLO and recognize the occupant, Russia, as a monitor of the peace process. “We see it as a point of no return that paves the way for Ukraine to losing its sovereignty,” the manifesto says.

A peaceful protest only. “We are convinced that bullets and weapons are for the frontline, here, in the capital of Ukraine the protest (can be) only peaceful. Every one of us will be protesting here in their chosen way, we are united by the idea of an independent and democratic Ukraine that knows how to defend and fight for itself. We believe that despite the efforts of pro-Russian media to divide us we are able to unite around the continuous non-violent protest to make Volodymyr Zelenskyi change his course towards Russia or, otherwise, resign.”

What the movement demands.The movement demands that the signature of the Head of the Office of the President Andriy Yermak is revoked from the agreement on establishing the Consultation Council. They also demand that he subsequently resigns and a criminal investigation is started against him based on Article no.111 of the Criminal Code “on treason” in relation to the above document of March 11. The movement also demands to stop withdrawal of Ukrainian troops, to dismiss Interior Minister Arsen Avakov and stop repressions against combat volunteers (particularly Andriy “Riff” Antonenko, Yulia Kuzmenko and Yana Duhar currently in pretrial detention and on house arrest on fabricated charges in the case of the murder of journalist Pavlo Sheremet).

What Ukraine is doing to combat COVID-19 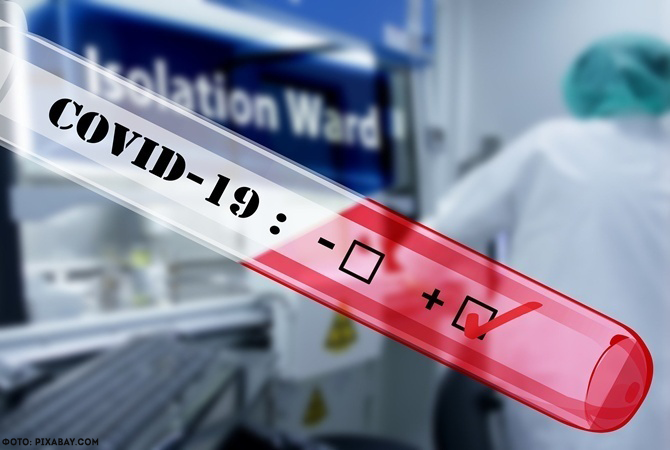 As of March 23 the total number of confirmed cases of COVID-19 in Ukraine stands at 73, three death cases were recorded.

Ukraine quarantines: all schools and universities are closed, mass gatherings are banned, all flights are suspended, additional restrictions on the use of public transport were introduced, foreign nationals are temporarily banned from entry. Local authorities in Kyiv and many other cities across the country ordered to close down everything but grocery shops, pharmacies and hospitals.

At the same time Ukraine has not yet held massive testing, more tests were to be supplied from China. On March 23 the Center of Public Health reported to have received 50 thousand testing systems of polymerase chain reaction (PCR) and 150 thousand rapid COVID-19 tests, that a military airplane flew from China.

The tests will be sent to the regions. The regions will get the number of tests that is proportional to the number of their residents. Each region will get 18-50 PCR test sets. A set can produce 100 reactions, so that one set should be enough to test at least 70 people.

To keep track of the COVID-19 outbreak in Ukraine, follow UkraineWorld’s live updates.

Coronavirus is not a biological weapon

UCMC’s Hybrid Warfare Analytical Group looks at how Russia is using the pandemic in its disinformation campaigns.