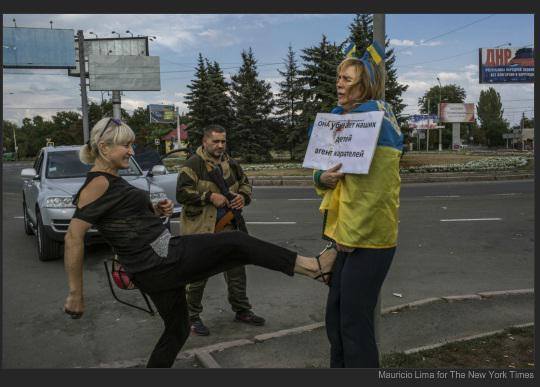 On the sidewalk of a busy street beside a checkpoint, a bearded gunman wrapped a woman in a Ukrainian flag and forced her to stand, sobbing in terror, holding a sign identifying her as a spotter for Ukrainian artillery. “She kills our children,” it read. Because the woman was a spy, said the gunman, a pro-Russian militant, everything that would happen to her would be well-deserved.

Passers-by stopped their cars to get out and spit, slap her face and throw tomatoes at her. Her knees buckled. She struggled to mumble in protest of her innocence and to shake her head in denial.

This theatrical scene of abuse unfolded a day after the rebel movement had paraded Ukrainian prisoners of war down a main thoroughfare here at bayonet point, then dramatically washed the pavement behind them.

The public humiliation of prisoners came as the presidents of Russia and Ukraine prepared to meet for peace talks in Minsk, the capital of Belarus, on Tuesday. The taunting and provocation appeared to be aimed at dissuading the Ukrainian government from accepting a settlement that might forestall a broader Russian intervention, a development that separatists here are banking on as their military fortunes wane.