Kyiv, August 27, 2014 – The road between Novoazovsk and Mariupol is under control of the Ukrainian Armed Forces. After yesterday’s battle, the Ukrainian servicemen reinforced their capacity on the eastern border of Bezimenne village. This was reported by the spokesman of the National Security and Defence Council Information Center Colonel Andriy Lysenko during a press briefing at Ukraine Crisis Media Center. “Mixed mobile groups of soldiers, law enforcement workers and guardsmen organized posts at the most dangerous directions of the enemy’s possible movement towards Mariupol. The city of Novoazovsk is under fire from both Russia and occupied spots on Ukrainian territory. However, the city remains under our control. Departments around Mariupol have been reinforced with additional manpower. The first operative National Guard brigade arrived with new equipment last night. The military is reinforcing fortification borders. At the moment the operative situation in Mariupol itself is calm and controlled. Transport and production facilities function normally,” added Colonel Lysenko. 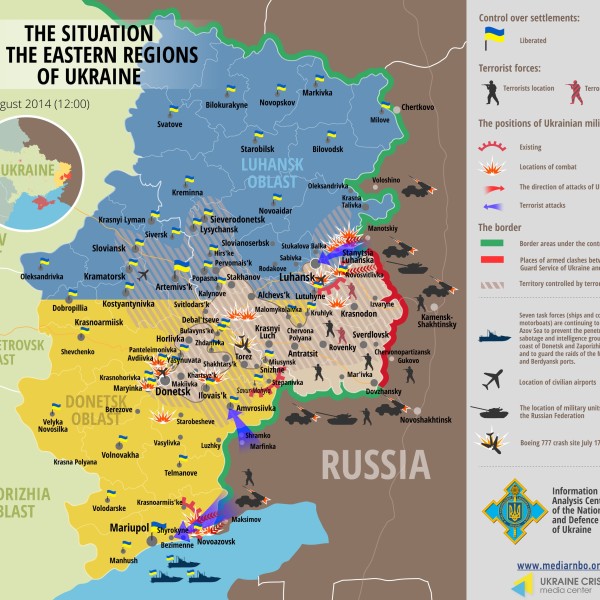 Combat aimed to maintain control over the city of Ilovaysk and entranceways and heights around it continues. “The terrorists attempted to attack the ATO roadblock near the village of Adrianapil in Donetsk oblast yesterday. The attack was rebuked, 8 mercenaries were taken together with their weapon. Ukrainian artillery fire at terrorist groups near the localities of Horlivka and Ilovaysk destroyed three tanks, one armored fighting vehicle, two “Grad” systems, four mine launchers, one car and one “Smerch” system. It is a missile launch system 300 mm in caliber that is armed with cassette ammunition, whose usage we have reported numerous times. About two hundred terrorists were also neutralized. In response to the attack at our position near the locality of Krasniy Yar, artillery fire destroyed one mine launcher calculation setup together with the mine launcher itself,” stated the NSDC spokesman.

According to operative data, a headquarters for the battalion tactic group of the Russian Armed Forces was set up at the exit from the locality of Pobeda. 5 BTR’s and 1 “KamAZ” entered Amvrosiyivka, together with additional military staff. “If this tactical group also got lost and ended up on Ukrainian territory by accident, just like airborne division #98, we only want to remind them that they can return to Russia by heading directly to the east,” noted Colonel Lysenko.

Russian airborne servicemen from regiment 331 , 98 Svir Division of the Russian Armed Forces, who were arrested near the village of Dzerkalne in Donetsk oblast on August 25, have already been sent to one of Kyiv’s temporary detention centers.

Russia continues firing at Ukrainian territory. As such, besides Novoazovsk, artillery fire at roadblocks belonging to the Ukrainian State Border Service and the Armed Forces near the localities of Kolesnykivka and Yuhanivka was opened yesterday from Russian territory. The situation at the border in other locations remains tense. “At 10:20 yesterday, near the locality of Kochkarske in Donetsk oblast, a battle broke out between the border regiment and a group of terrorists. The mercenaries retreated after reinforcements arrived. The area was searched for suspicious persons,” stated the NSDC spokesman.

Russia continues to accumulate troops at its border. During the last 24 hours military equipment of the Russian Armed Forces was pulled in regions near the Ukrainian border, mostly in Rostov oblast. Meanwhile, military Russian presence has decreased near Belgorod, Kursk, Voronezh and Bryansk oblasts.

Russian troops are setting up positions near the city of Dzhankoy and in the north of temporarily occupied Crimea. The locals are talking about possible combat.

The Russian military aviation violated the Ukrainian air space near the village of Chervoniy Chaban in Kherson oblast, where three Russian helicopters entered continental Ukraine from Crimea at 500 meters and retreated after doing intelligence work.