Kyiv, August 28, 2014 – “At approximately 11 a.m. the outskirts of Novoazovsk and the positions of the Ukrainian Armed Forces were fired at using “Grad” systems from Russian territory. An attack by two columns, including tanks, BMP’s and BTR fighting vehicles, which entered Ukraine from Veselo-Voznesenka and Maksymovo of Rostov oblast in Russia, began at 12:30. Our border servicemen and guardsmen retreated as they did not have heavy equipment.  In order to preserve the lives of Ukrainian servicemen and regroup manpower and equipment, the ATO, MIA and State Border Service united troops retreated from Novoazovsk on orders of the ATO commandment. Later during the day both Russian columns entered Novoazovsk,” stated NSDC Information Center spokesman Colonel Andriy Lysenko during a press briefing at the Ukraine Crisis Media Center. 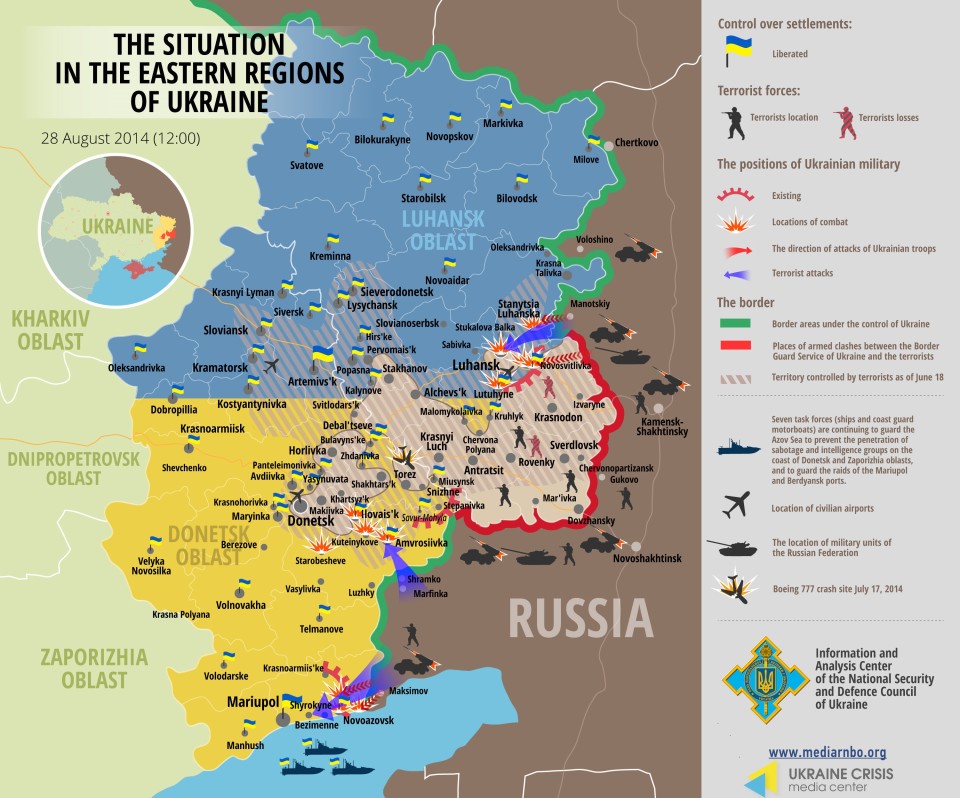 In the last 24 hours the situation in the ATO zone has become more complicated. Counterattacks by Russian armed troops and gang formations in the southeast part of Donetsk oblast continue. Yesterday the Russian servicemen established control over several localities in Novoazovsk, Starobesheve and Amvrosiyivka districts. Russian armored machinery and their mercenaries are also located on the outskirts of Novoazovsk.  An “Uragan” missile launch system was seen near the locality of Kholodne. “In the direction of Mariupol, the ATO united troops continue perfecting their engineering and fortification equipment of roadblocks and base points and conducting prophylaxis on the territory of Mariupol,” added Lysenko.

Throughout the past week, the regiments of local “rebels” and Cossacks, who were unable to resist the ATO troops, and who are also involved in looting and criminal activity in cities of Luhansk oblast under Russian control (Luhansk, Krasnodon, Antratsyt), were replaced by regular Russian troops. “Reinforcements for the terrorists arrived in the localities of Perevalsk, Zorynsk, Maloivanivsk, Mala Fashchivka, Verguliyivka, Rassypne, and these towns were set up for long-term defense. Mine fire continues in Debaltsevo by mine launchers set up on vehicles. Terrorists and Russian troops are gathering into a powerful troop to advance towards Shakhtarsk and Ilovaysk. Russian medical personnel arrived at the Krasnodon Central City Hospital with medical equipment, after which wounded and killed mercenaries were mass-delivered to the hospital. The presence of doctors from the neighboring country on terrorist-controlled territory is yet another piece of evidence to the fact that regular Russian servicemen are involved in the conflict. We have reported on the instances of Russian aggression numerous times,” noted the NSDC spokesman.

More Russians are joining the airborne servicemen that got lost 25 kilometers away from the border together with their storm weaponry and that were later arrested. According to the Russian Soldiers’ Mothers Committee, about 400 Russian soldiers have been killed and have been wounded in our country due to the events in Ukraine.

The situation is turbulent on the side of occupied Crimea as well. Yesterday at 20:25EET, a border service regiment of the “Chervony Chaban” state border troop from Kherson engaged in combat with a sabotage-intelligence group that advanced from the territory of temporarily occupied Crimea to the continental part of Ukraine. The border servicemen preserved their positions and forced the saboteurs to return to the peninsula. “6 ship and speedboat tactical groups of the State Marine Guard are serving in the Azov sea to protect the marine part of the state border. Yesterday at 21:00EET the Mariupol Marine Guard ship “Donbas” downed a Russian drone near the sea port of Mariupol,” stated colonel Lysenko.