Kyiv, August 29, 2014 – The emergency NSDC, called by the President of Ukraine Petro Poroshenko on August 28, ordered the Minister of Foreign Affairs to address the countries that signed the Budapest Memorandum in 1994 to hold consultations regarding the situation in Donetsk and Luhansk oblast. This was reported by NSDC Information Center spokesman Colonel Andriy Lysenko during a press briefing at the Ukraine Crisis Media Center today. “Ukraine will also ask for help from the UN Security Council, the NATO, the EU, the OSCE, Ukraine’s strategic partner states. Our country is counting on help from the United States, in particular by receiving the special status of “US main ally outside of the NATO.” The NSDC approved a number of measures to ensure sovereignty and territorial integrity of Ukraine, as well as the strategic foreign policy priorities, the increase of military capabilities of the Ukrainian Armed Forces, other armed formations and law enforcement bodies, the usage of defense industry potential, the reinforcement of information and cyber security of Ukraine,” added Andriy Lysenko. 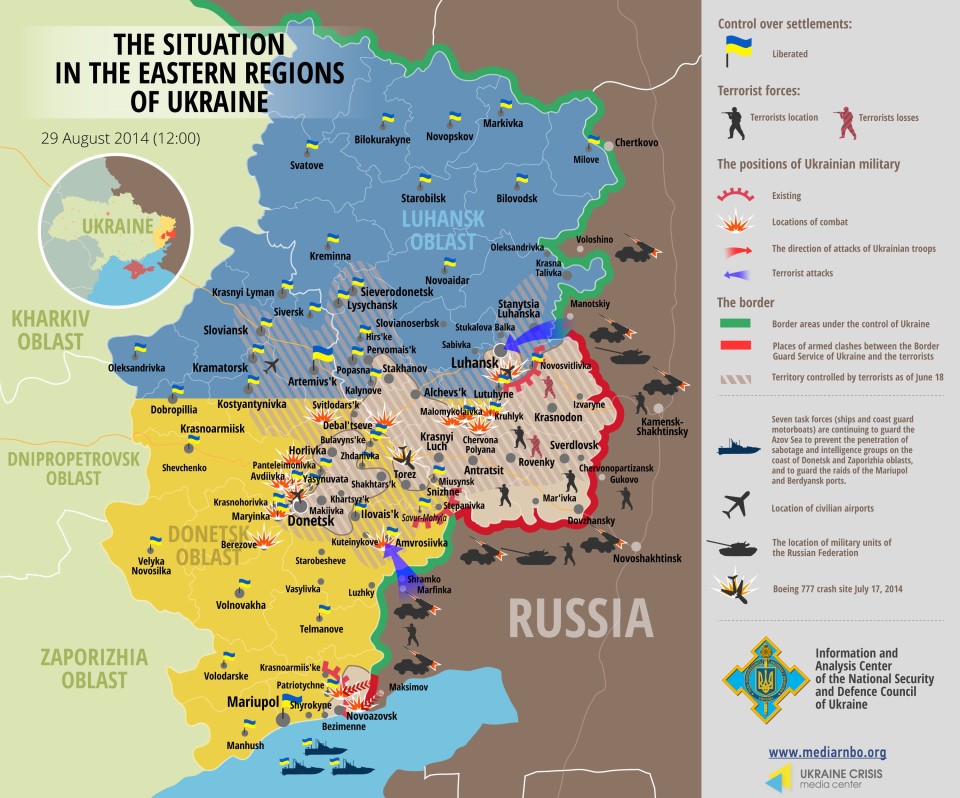 The situation in Luhansk and southern districts of Donetsk oblasts remains tense. With direct support from the Russian Armed Forces, the terrorists continue their attempts to counterattack ATO troops and establish control around Ilovaysk, Amvrosiyivka, Starobesheve, Novoazovsk in Donetsk oblast. Yesterday, mercenaries and Russian armed forces renewed active combat in Ilovaysk, Novosvitlivka, Khriashchuvate, Novoazovsk and Savur-Mohyla. The number of troops is increasing in the northern part of Luhansk. “Reinforcements for Ukrainian troops have arrived in the south. In particular, they received tank-defense weaponry. The tactical group “Kordon” is carrying out measure to secure and defend the other border between Novoazovsk and Amvrosiyivka,” noted the NSDC spokesman.

Yesterday at 15:40 battle broke out near the Ukrainian village of Patriotychne between a department of the mobile border troop of the State Border Service and the Russians, who had designated their fighters with white bands on both sleeves, and their equipment – with white circles. “The enemy retreated towards Novoazovsk under pressure on part of the border troops. An hour after the battle, angry Russians spent 50 minutes firing from “Grad” systems at the villages of Bezymenne and Samsonove,” added Lysenko.

A state troop detected an automobile column of terrorists which had been moving towards the village of Lysyche in Amvrosiyivka district. The column, around 1,5 kilometers in length, included 2 BTR armored personnel carriers, URAL and KamAZ vehicles, armored vans and cars with St. George’s Ribbons. At the same time, checkpoint “Uspenka” was under fire, the column split and part of it headed towards “Uspenka” checkpoint using field roads.

United forces of border and national guard troops attacked the terrorists. The battle resulted in the destruction of 20 equipment units and 26 terrorists, mostly Chechens and Russians.

According to military intelligence, Russia continues to supply weapons and personnel to the terrorists in the East of Ukraine. As such, 5 KamAZ vehicles with armed mercenaries left the territory of the Russian Federation by road between Anikin (Russia) and Provallya (Ukraine) and entered near “Hrushevsky prud,” later heading towards Krasnodon. “At 20:15 a provocation on part of the Russian armed forced occurred on Russian territory on the road between Derkul (Russia) and Krasna Talivka in Luhansk oblast. 2 tanks and 9 BTR’s started moving towards Ukraine at high speeds, however they stopped several meters before reaching the state border and started driving along it. There is a high possibility that they may attempt an illegal invasion to Ukraine at another border location,” explained Andriy Lysenko.