Kyiv, September 2, 2014 – “Russians attacked tonight near the village of Rozdolne by the bridge over the Kalmius river. Four trucks with white flags and a “Children” sign approached the roadblocks. Armed people jumped out of the trucks and opened fire at Ukrainian servicemen. Large-scale combat started. Thanks to accordant and professional counteraction, the Ukrainian National Guard rebuked the enemy attack, and the latter retreated from Ukrainian positions. The attackers suffered severe losses in terms of manpower and equipment. Four enemy trucks were neutralized”, stated NSDC Information Center spokesman Colonel Andriy Lysenko during a press briefing at the Ukraine Crisis Media Center. 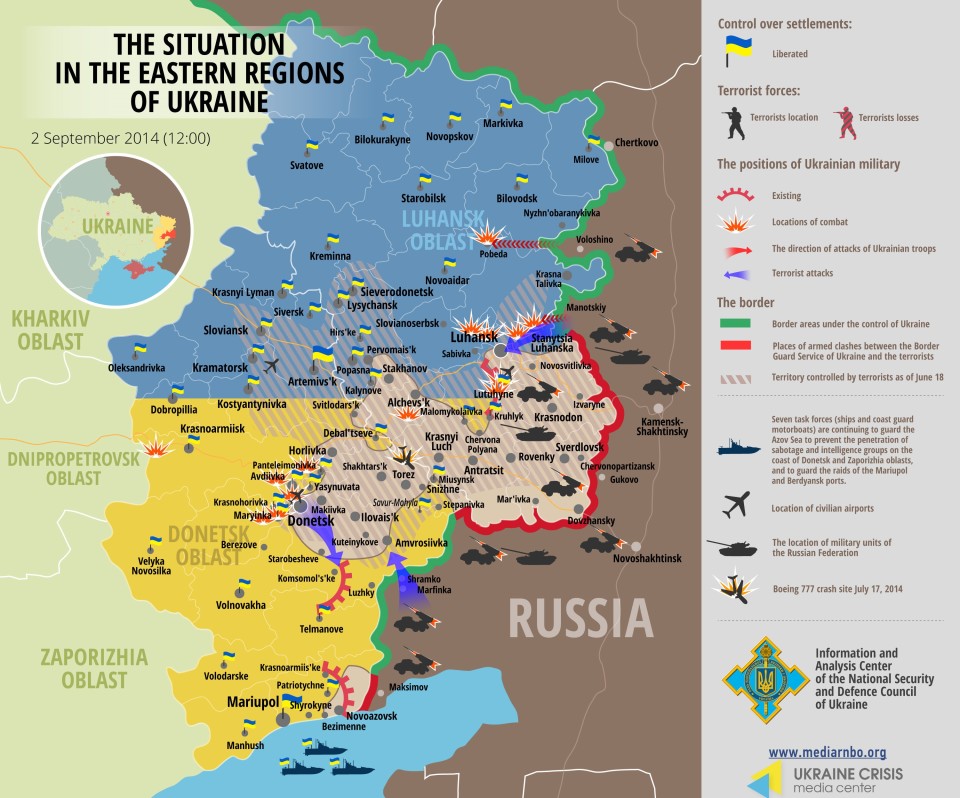 Russian armed forces continue accumulating manpower and military equipment in occupied localities. Russian troops have been spotted in Donetsk, Amvrosiyivka, Starobesheva, Guselshchikovo, in Novoazovsk and Markino in Donetsk oblast; in the village of Pobeda, Novosvitlivka, Khryashchuvate in Luhansk oblast, and in Luhansk itself.

Last night, the National Guard of Ukraine and the occupants engaged in ardent combat near the localities of Rozdolnoye, Vasylivka and Starolaspa. Enemy artillery fire and “Grad” missile launch systems fired at guardsmen brigades. The Ukrainian servicemen heroically withstood 3 enemy attacks. Throughout the battle, 9 National Guard servicemen were wounded and one was killed.

Russia mercenaries fired a “Grad” system towards the town of Komsomolske in Donetsk oblast.

Yesterday at 7:30 p.m. the border regiment near the locality of Bezimenne in Novoazovsk district of Donetsk oblast engaged in battle with a military group reinforced by BMP’s with terrorist DNR flags. The Russian mercenaries suffered losses and retreated.

At 9 p.m. another border regiment went into battle near the village of Sakhanka near Mariupol. The border servicemen called for reinforcements. After the guardsmen arrived, the Russians’ attack was rebuked. 1 border servicemen died, 3 were injured.

Another clash happened at 9:35 p.m. near the locality of Rosa Luxembourg. The battle ended without losses.

The Russian side is using so-called humanitarian convoy vehicles for material provision of terrorists and Russian armed forces acting on Ukrainian territory. As such, last night 4 white trucks ventured from Russian territory through Dibrovka towards Dmytrivka in Donetsk oblast and returned within an hour. This is not the first instance when white trucks are illegally crossing the border with SUV and security escorts.

The local government in the town of Krasniy Luch received orders from Russian Armed Forces representatives to give land lots to bury the Russian soldiers. These are Russian representatives which are to be buried in Ukraine to avoid undesirable resonance at home.

Human Rights Watch (HRW) stated that the local population in Donbas is being tortured by pro-Russian mercenaries. In particular they note that mercenaries arrest civilians, subject them to torture, diminish human dignity, involve them in forced labor, using them as hostages.

In Novoazovsk the terrorists looted local bank departments. Social payments were suspended in the city because of this, there is a shortage of food, the leftovers are overpriced.

German Federal Chancellor Angela Merkel called for immediate political regulation of the situation in Ukraine. She stated that Russia’s annex of Crimea, as well as Moscow’s current actions, aimed to escalate the situation in Ukraine, are a clear violation of international law and testify to Russia’s desire to reconstruct the borders, thus changing Europe’s post-war structure. besides, Angela Merkel emphasized that the recent news from Ukraine prove that it is no longer an internal conflict in Ukraine but war between Russia and Ukraine. The German Federal Chancellor also noted that Russian servicemen entered territory of Ukraine and the violation of international legislation should have consequences, and that Moscow’s actions are unacceptable. The European Union developed a joint decision at the EU Council session on August 30 regarding possible additional sanctions against Russia, which many be put into practice this week.

NATO General Secretary Anders Fogh Rasmussen stated regarding the supply of paratrooper helicopter “Mistral” carrier by the French government to Russia that the government of the country should note the security situation and the concern of its NATO partners.

The head of the US Senate Committee for Foreign Affairs Robert Menendez stated that Russia’s recent actions in Ukraine are Russia’s war against Europe. He promised that new sanctions against the Russian Federation would be even more effective, as V. Putin was hot be punished for invading a foreign country. He also reported that he addressed the U.S. President with the call to broaden sanctions against Russia and give Ukraine defense weapons. Besides, the Head of the Intelligence Committee of the House of Representatives of the U.S. Senate Michael Rodgers, Senator John McCain and Head of the U.S. Senate Foreign Affairs Committee Robert Menendez stated the necessity of supplying Ukraine with defense weaponry.

Opposition parties in the Czech Parliament made the demand to immediately call a session of the highest legislative government body of the country to discuss the statement made by Prime minister Bohuslav Sobotka that Prague is not ready to sign off on a new sanctions package against Russia. According to the opposition, the position of the head of state is unacceptable and damaging to the Czech Republic.

Norwegian Foreign Affairs Minister Bjørge Brende and European Affairs Minister Vidar Helgesen announced a fourfold increase in financial aid for Ukraine (up to 25,5 million USD), and also additional humanitarian assistance to battle the consequences of terrorist action in the east of Ukraine. Bjørge Brende emphasized the readiness to provide further support to our country in conducting reforms.