Kyiv, September 7, 2014: “Published today was the protocol signed by the Trilateral Contact Group of representatives of Ukraine, the Russian Federation and the OSCE on the results of the Minsk meeting. Its resolution aims for the implementation of the peace plan of the Ukrainian President and the initiatives of the Russian President,” reported deputy head of the NSDC  information center Volodymyr Polyoviy during a press briefing at the Ukraine Crisis Media Center. 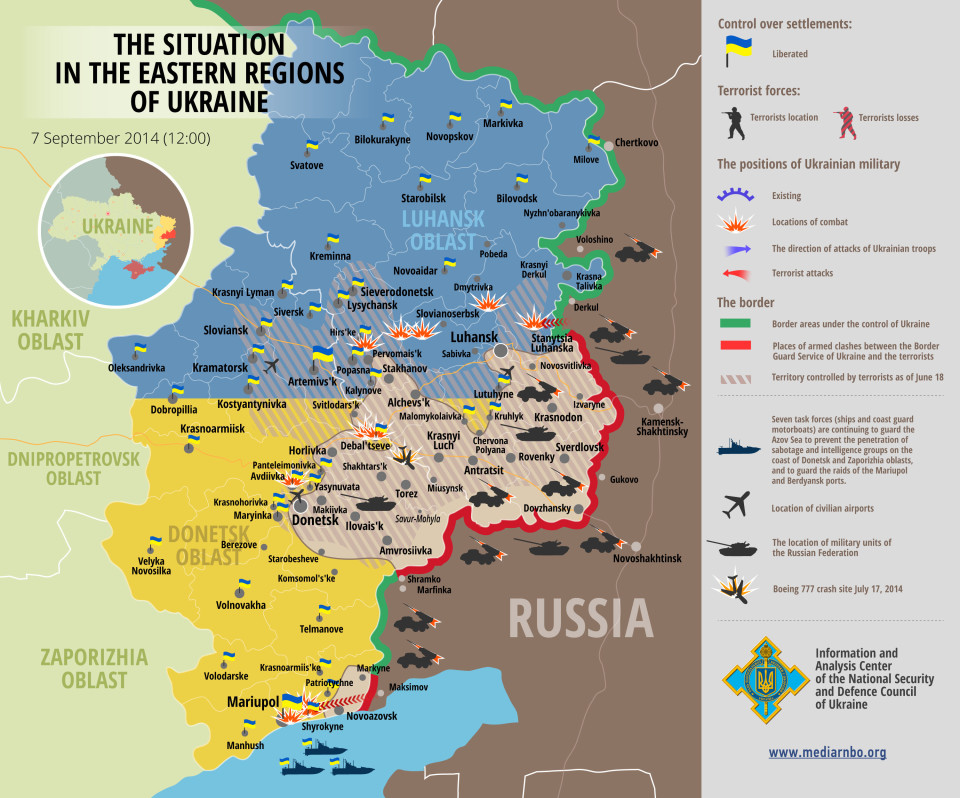 According to the agreements, the parties are to immediately cease fire on both sides and ensure monitoring and verification on part of the OSCE of the ceasefire regime.

The sides ensure constant monitoring at the Ukraine-Russia border and verification on part of the OSCE with the creation of a safety zone in the borderline regions of Ukraine and Russia.

The sides are obliged to “remove illegal armed formations, as well as terrorists and mercenaries, from Ukrainian territory.”

Both parties are obliged to immediately free all prisoners of war and hostages that are being held illegally.

Mr. Polyoviy stated that Ukraine had already begun work to free the hostages and prisoners. The Ukrainian Security Service is currently actively working on detailing the database of those who had gone missing or are currently being held by the terrorists. The Inter-Institutional Center that engages with this problem is working together with volunteers, civil activists, independent journalists. Today in the regions of Ukraine,, the heads of oblast SBU headquarters and their colleagues from the MIA have already started personal appointments with the citizens.

The work of the Center is overseen by the Deputy Head of the SBU Vitaly Yalovenko.

According to the General Headquarters, yesterday 2 fighters of the 9th territorial defense battalion were handed over by the Russian side through Milove checkpoint (Luhansk oblast).

When commenting on the situation in the conflict zone in the east of Ukraine, Volodymyr Polyoviy stated that the Ukrainian servicemen adhere fully to the ceasefire conditions. Meanwhile terrorists have fired ago ATO positions in various districts throughout the past day. In particular, yesterday the positions of our troops and civilian objects were fired at near Mariupol.

The deputy head of the NSDC information center noted that the atmosphere in Mariupol is maintained at a peaceful level, the situation in the city is fully under control. City head Yury Khotlubey held a meeting of the territorial defense headquarters, during which the issues of reinforcing city defense around the perimeter at a distance of 15-20 km were discussed.
According to the NSDC representative, columns of armored equipment and military trucks, including Russian T-72BM tanks, Strela-10 missile launch systems and new Russian Vityaz-type systems were seen in Luhansk oblast to the northeast of the village of Syevyerniy. The column moved towards the south of the oblast.

The Russian sides continues to accumulate its troops at the north of temporarily occupied Crime and rotate personnel and equipment. The Russian troops are active on the road between Taganrog and Mariupol. the Russians are setting up transportation corridors from Russian to Ukrainian territory.

Throughout the day, there have been no violations of Ukrainian airspace or fire form Russian territory.

According to the deputy head of the NSDC information center, overall losses since the beginning of the ATO on the Ukrainian side constitute 864 dead and 3215 wounded.