Kyiv, September 8, 2014. “Despite the announced ceasefire, the situation in the ATO zone remains tense. Ukrainian positions are under fire. The nature of this fire has changed: in majority of cases the attackers use mine launchers and sniper weaponry and not heavy artillery”,- reported Colonel Andriy Lysenko, the National Defense and Security Council Information Center spokesman at his briefing at Ukraine Crisis Media Center. 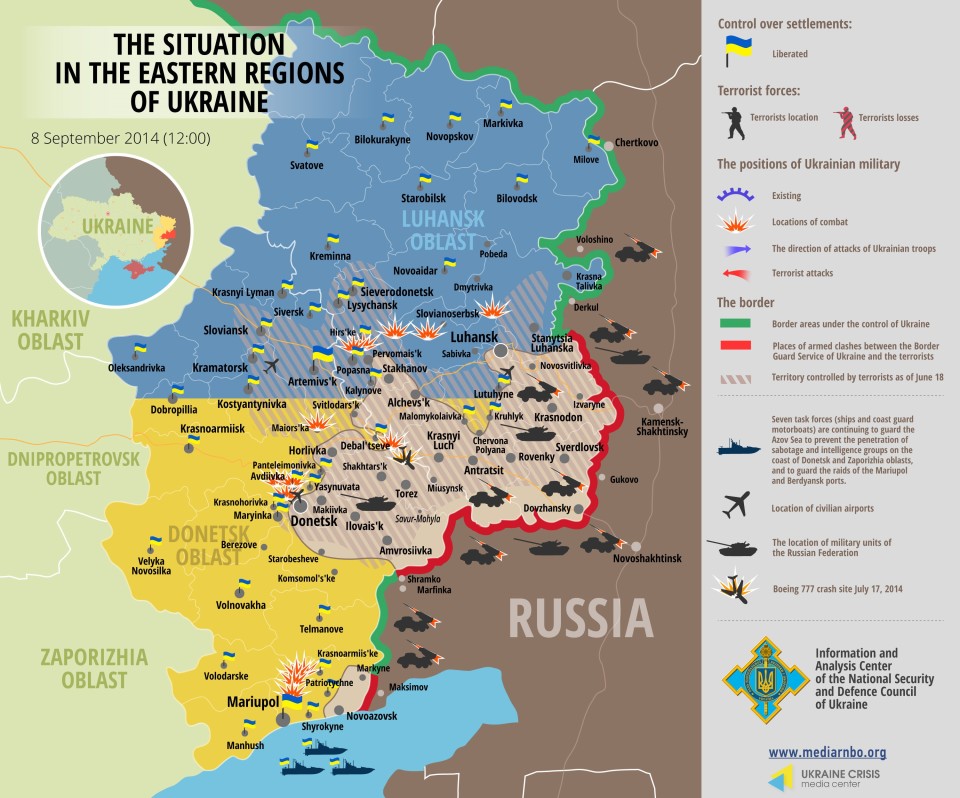 Russian saboteurs are resorting to provocations by shooting at terrorist positions using sabotage and intelligence groups which work under the guise of Ukrainian servicemen.

Last night, explosions were heard in Donetsk. The city was attacked from the Donetsk railway station. The outskirts of the city of Shchastya in Luhansk oblast are periodically under account.

Because of threat of fire and sabotage, three transit points for temporary migrants in the towns of Volnovakha, Orly and Shchastya suspended their work. At the moment four transit points in the ATO zone continue working.

The Colonel said that yesterday near Slavyanoserbsk, the Russians built their own roadblock right across from the National Guard roadblocks. After this they offered to our servicemen to leave their roadblock threatening that the Russian military column would pass right through and in case they opened fire, they would be destroyed in response. After this OSCE representatives met with the terrorists and agreed on keeping distance between the sides. However immediately after the OSCE representatives left, the roadblock was surrounded on three sides by hidden equipment: 4 T-72 tanks, 2 BMD’s, 2 BMP’s, 4 BTR’s and about 70 soldiers. At the moment our servicemen are defending the roadblock and not planning on leaving their positions. There have been no active clashes as of the moment.

Yesterday at 6:40 p.m. the border regiment near the locality of Telmanovo of Donetsk oblast was attacked, the border servicemen were forced to open fire in response. The border workers rebuked the terrorists’ attack and captured a VAZ vehicle wherein they discovered pro-Russian literature.

At 9:30 p.m. a raider group detected a saboteur who was doing intelligence work near the city of Mariupol. The spy was detained when he attempted to flee by car.

In the districts controlled by terrorists, circulation of manpower and equipment of the Russian army has been detected.

According to operative information, Russia is increasing its attack groups on the occupied territory of Crimea. Within the past few weeks on the border with Kherson oblast, the Russian army accumulated no less than 64 tanks, about a hundred BTR’s and BMP’s, several dozen Grad, Uragan and Buk systems, high-precision air-defense and land-defense systems and jets. A field hospital has been set up near the locality of Chornomorsk.

7 big air carrier vessels of the Russian Black Sea Fleet and 1 vessel of the Baltic fleet have been allocated in the Black Sea.

On the road between Mariupol and Taganrog, across from the unit of the Donetsk border regiment, Russians are doing engineering work on the entire land-based area to set up and reinforce military positions on Russian territory.

Andriy Lysenko informed that in Mariupol itself, the situation is stable and under control. First deputy of the Ukrainian National Guard Commander Lieutenant General Olexandr Kryvenko inspected the artillery of the ATO forces located in the city of Mariupol. All of the equipment has been renovated and restored after participating in armed clashes.

Russia is trying to destabilize the situation in Ukraine and other countries, as well. According to the statement made by former deputy Minister of Internal Affairs of the Republic of Moldova G. Kosovan, so-called ‘green men’ are present on the territory of Moldova, who are recruiting the youth and educating it on methods of misinformations, emergency activity, usage of sniper weaponry. According to him, over 500 people have been recruited in Moldova and undergone training in Rostov, Moscow, Transnistria and Bieltsy.

Bilateral naval training of the Ukrainian and U.S. Navy Sea Breeze 2014 begins today in the northwestern part of the Black Sea. The training will last until September 10.

The training aims to “conduct an international operation to establish and ensure a safety zone for sea transportation in the crisis region.” The naval component includes 12 ships and vessels for provision, including 5 Ukrainian naval ships and 2 State Border Service ships.

According to official reports, there have been no dead among the Ukrainian servicemen throughout the past day. Information about the wounded will be established as of 5 p.m.

Commenting on the situation in conflict zone localities, the Col. Lysenko reported that the situation in Luhansk remains relatively calm. The city still has no electricity, water or communication. Shops only have the barest essential foodstuffs, as the terrorists attack prevented food, medicine and fuel supplies from reaching Luhansk. The citizens are still not getting salaries, pensions and social dues. Municipal services are trying to renovate the infrastructure of the city, conducting preparations to renew electricity supplies and renovate the damaged electricity lines.

Civilian life is being restored on territories that have been freed from Russian mercenaries. Thanks to the actions of the Ukrainian government, 27 of 39 employment centers in Donetsk oblast are already working as usual and providing the population with their services. Unemployment dues are being issued in 19 of the the working centers. The work of the Donetsk Center for Professional Technical Education of the State Employment Service has been renewed. 15 of the 30 employment centers work in Luhansk oblast. 14 of them issue unemployment benefits.

Between April 1, 2014 and September 5, 2014, over 16 billion UAH worth of pensions have been issued around Donetsk and Luhansk oblasts.

The Col. Lysenko also reported on the reaction of international community to the events in Ukraine. Yesterday the President of Ukraine spoke with German Federal Chancellor Angela Merkel over the phone. The head of the Ukrainian state emphasized the necessity of strict adherence to all points that were accorded, in particular, the importance of ensuring the monitoring and verification of the ceasefire on part of the OSCE as soon as possible, wherein there has been some progress, and stated that on orders of the President, the Ukrainian troops are ready to be maximally efficient in ensuring the necessary procedures on their part.

The head of the German MFA Frank-Walter Steinmeier stated that a lengthy ceasefire requires “strong political will” on part of Kyiv and Moscow. He called to do everything to execute the Minsk agreements.

The OSCE formed a mechanism to examine instances of violation of the ceasefire, and it calls for participant countries to broaden the mission in the nearest future by nominating candidates with sufficient experience, stated current head of the OSCE Didier Burkhalter.

He also thanks the Special Observer Mission in Ukraine for the measures they employed under the new conditions that emerged after the signing of the protocol in Minsk. Burkhalter confirmed that within two days the OSCE observer mission in Ukraine relocated 59 observers with ceasefire monitoring experience and is making all possible efforts to increase their number further.

U.S. Department of State representative Mary Harf confirmed that the NATO will support Ukraine and emphasized the statement made by President Obama regarding the end of the development of the measures to broaden sanctions against the financial, energy and defense sectors of the Russian economy.

U.S. Republican Senators John McCain and Lindsay Graham declared that the situation is very difficult in the region where thousands of Russian troops invaded and attacked Ukraine and called for the West to not allow a “second Transnistria” to emerge there.