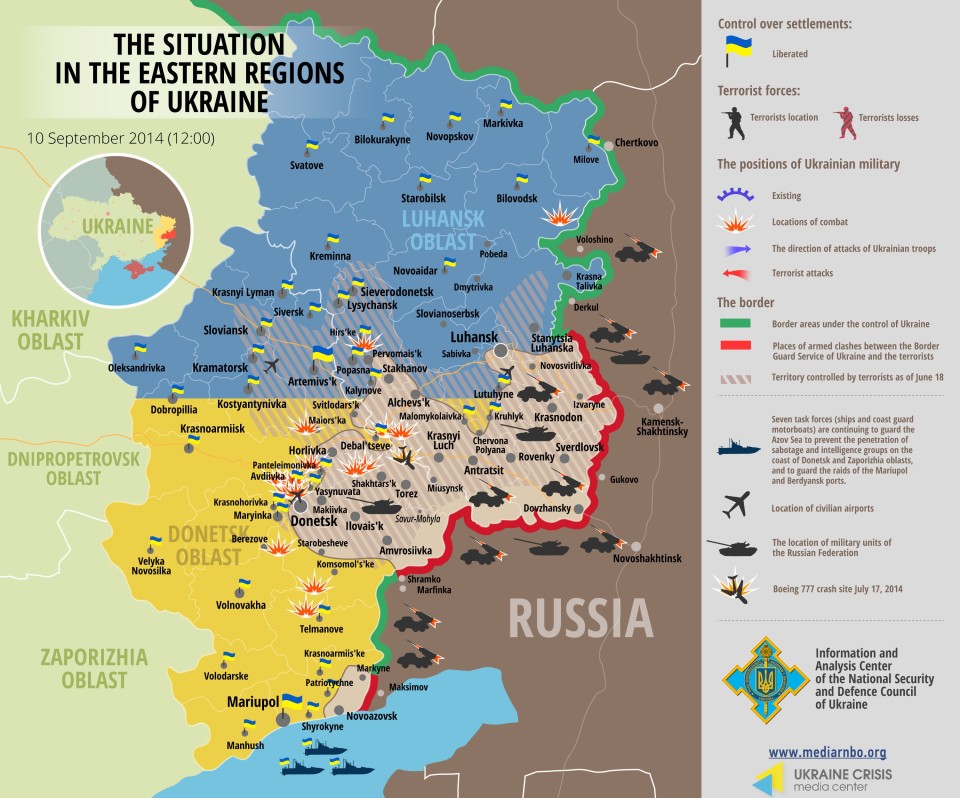 OSCE observers recorded cases of ceasefire mode violation in the east of Ukraine, in particular nearby Luhansk, Donetsk and Mariupol.

According to Lysenko, battles for the airport continue in Donetsk. Russian mercenaries lost 3 tanks and 2 APCs during yesterday’s attack on the positions of the Armed Forces of Ukraine in this area. Positions of our subdivisions in the territory of Donetsk airport were attacked by fire using “Grad” missile launchers.

The Colonel informed that terrorists continue organizing provocations. They are bombarding residential quarters in Donetsk, imitating Ukrainian artillery responding with fire. Donetsk specialized border school of general education No.22, two nine-storey buildings and private buildings were damaged as a result of shell hit.

Militants were shelling Nyzhnya Krynka settlement in Shakhtarskyi district from the area of school No.7 in Khartsyzk.

Subdivisions of the enemy continue committing provocative actions around ATO forces checkpoint nearby Slovyanoserbsk populated locality. Tanks, armoured personnel carriers and infantry forces of the enemy are still surrounding the checkpoint from three directions. As of now there were no military clashes between the parties. Ceasefire mode is being maintained in this area.

Accumulation of equipment and manpower of the enemy, including frontline reconnaissance means, is observed nearby Bezimenne populated locality in Novoazovsk district.

The NSDC spokesman reported that as of today ATO headquarters are introducing special mode in Mariupol direction. The aim of these restrictions and prohibitions is favouring state defence measures and terrorist activity counter effort.

The following security restrictions have been introduces in the territory of Novoazovsk and Telman districts in Donetsk region:

– proceeding of motor convoys consisting of two or more vehicles;

– presence of persons without identification documents (for Ukrainian citizens – a national passport with an entry of registration);

– entrance and movement of persons who do not reside in the stated area or are unable to support the aim of such movement;

– approach positions and areas of ATO forces location on foot or in vehicle without permission of authorities);

– limitation of vehicles speed to 40 km per hour;

– use of radio sets, instruments for filming, photo- and camera shooting, shooting of localities, military objects and objects of infrastructure;

– public gatherings of citizens (without approval of military authorities);

– bearing of weapons, ammunition, use of pyrotechnic articles.

The Colonel Lysenko also informed on the reaction of international community on Ukrainian crisis. Last night the President of Ukraine Petro Poroshenko held a telephone conversation with the president of the Russian Federation Vladimir Putin. The parties discussed range of issues connected with ceasefire mode provision. The presidents agreed to keep these issues under their permanent control.

Heads of Ministries of Foreign Affairs of Germany and Japan expressed their joint concern with the facts of breaking ceasefire mode in Ukraine and called upon all the parties to maintain the armistice. At the same time the German diplomat emphasized that Moscow is to withdraw all its troops and ammunition from the territory of Ukraine without further delay.

Minister of Foreign Affairs of Luxembourg Jean Asselborn stated that under the conditions of Russian aggression and, correspondingly, radical changes in political and security situation in the world NATO was going to support Ukraine defending its sovereignty and territorial integrity.

US Department of State representative Marie Harf stated that the USA are finalizing the preparation of events aimed at widening and deepening of the sanctions against financial, energy and defence sectors of Russia. Nevertheless, the final decision will be made «on the basis of what is going to be happening during next several days». Marie Harf informed that conclusions of experts in their preliminary report on investigation of causes of «Malaysia Airlines» Boeing crash indicate its possible hitting by rockets from “BUK” missile launcher. According to her the aircraft was most likely hit by exactly the same rocket launched from the territory controlled by militants.