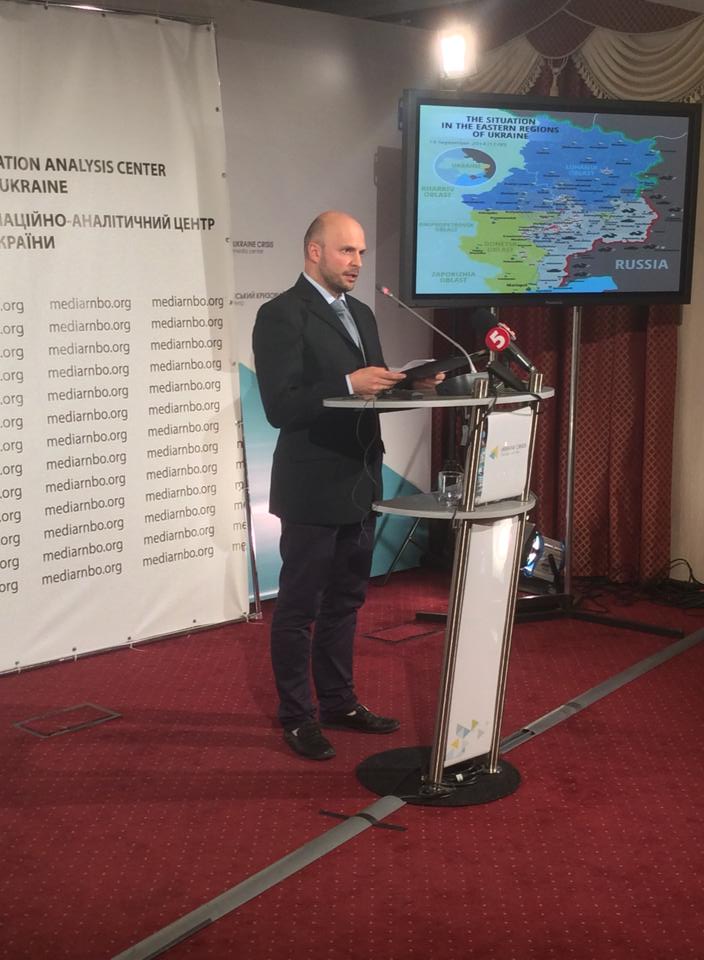 Kyiv, September 14, 2014. President Petro Poroshenko and chairman-in-office Didier Burkhalter discussed the deployment of more specialists to the OSCE special monitoring mission to observe the implementation of the peace plan in the Donbas region. Such statement was released by Volodymyr Polevyi, Deputy Chief of the Information center, National Security and Defense Council information center spokesman at his press briefing at Ukraine Crisis Media Center.

Yesterday, the ATO forces repelled two assaults of Russian mercenaries. Yet another sige took place near Donetsk city airport and on the way to Vasylivka, near Panteleimonivka.  More than 200 mercenaries took place in the assault. The attack was repelled.

In total, the terrorists shelled positions of Ukrainian military, therefore broke the ceasefire agreement for 249 times.

There have also been reports of airspace intrusion and airspace reconnaissance, namely an Unmanned Aerial Vehicle was detected entering Ukrainian airspace in the direction to Mariupol. Another UAV was detected by Luhansk «Bilovodsk» squad, flying from the territory of the Russian Federation in «Kalmikovka, Rostov region to Baranivka, Luhansk region.» The UAV was flying at the altitude of 2,000 meters.

Between 14:25 and 21:00 on September 13, 2014 a convoy, consisting of 216 vehicles exited the territory of Ukraine through the checkpoint «Izvaryne.» The convoy from the Russian Federation allegedly contained the «humanitarian aid» for the Donbas inhabitants. Representatives of Ukraine’s border control and cutsoms services did not take part in convoy registration.

Due to constant shelling and threats to life, the energy specialists cannot get access to the East-Donbas water supply facility. The facility is heavily damaged and may take up to two weeks to get rebuilt. The biggest hampering circumstance for its recovery is the absence of security assurances and the «green corridor» to the energy specialists, taking care of the recovery.

In the meantime, units of the State Emergency Service of Ukraine explore the area, namely 13,5 hectares of the territory as well as 5 buildings were explored. The specialists discovered and disposed 39 pieces of explosive objects.