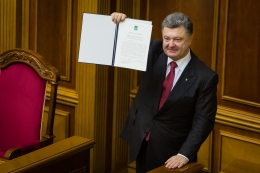 Distinguished deputies of the Verkhovna Rada of Ukraine!

Dear members of the European Parliament!

First of all, I would like to express gratefulness for the applause and support to Ukraine you’ve just shown. I’d like to say that the atmosphere in the Verkhovna Rada is similar to that of 1991 when Ukraine gained independence.

“Who is willing to die for Europe?” – Scientists ask this question when they carry out sociological research of the influence of European identity and the natural division of nations.

It is considered completely natural to be ready to sacrifice life and die for your Motherland.

But Nebesna Sotnya and 872 brave Ukrainian warriors died not only for Ukraine. They died for us to have a decent place in the family of European nations. Not a single nation has paid such a high price for the right to be Europeans since the Second World War.

Tell me please who will now dare close the doors of Europe in front of Ukraine? Who will be against giving us the prospect of membership in the EU towards which we are making the first yet very decisive step today?

We’ve been elaborating this Agreement for 7 years, since Ukraine-EU Summit in Paris in 2007. I’d like to express gratitude to everyone involved in the given process – diplomats, government officials, deputies, exerts and first of all citizens who resolutely supported our European course.

Last autumn it seemed that everything was ready for signing, because the entire country said “yes” and arguments of those who said “no” were pretty weak. But notwithstanding the fact that the entire country waited for that, it didn’t happen in Vilnius, on November 29.

The necessity of the Agreement was and is absolutely apparent for the whole Ukrainian society. The society rose in rebellion when Yanukovych tried to turn our express from west to east. European integration became our national idea.

I am confident that today’s voting will clearly demonstrate that. Internal and external attempts to stop our strategic advancement have already failed.

Historical agreement has been signed in Brussels on June 27!

Today’s synchronous ratification will be a holiday not only for Ukraine, but also for the whole united Europe, because it doesn’t exist without Ukraine.

We withstood this powerful pressure and blackmail. No paragraph, no word and even no comma have been changed in the text of the agreement. I will sign the Law on ratification today in this hall. I instruct the Government to approve the plan on the implementation of the agreement tomorrow and start implementing it from the first minute!

Dear friends, implementation is very simple. It is the rule of law, freedom of speech, visa-free regime, the issue of investment climate, democracy. We do not have the right to delay.

Recent agreements achieved in Brussels have given Ukraine even more than the Agreement provides for. Ukraine has guaranteed preferences until the end of 2015. Ukrainian goods will be sold in the EU duty-free while European goods in the Ukrainian market will work under the WTO rules supporting Ukrainian manufacturers, Ukrainian budget and Ukrainian currency rate. National economy received 1.5 additional years to be better prepared for competition with European manufacturers.

Thus, I’d like to express gratefulness to the EU for this multibillion bonus for Ukraine in such a difficult time.

Our European partners are asking for only one thing – reforms. Do not delay them. War and political situation cannot justify the absence of reforms. I am confident that in the nearest time, the National plan of reforms “Strategy-2020” will be presented. Jointly. We shouldn’t grab the biggest piece of the pie. The President, the Government and the Parliament should be responsible. If we are united and efficient, we will win. If somebody tries to open the internal front, it will be harmful for Ukraine. I, the Government and the Parliament will not allow doing this.

These reforms also stipulate that Ukraine should become an area of powerful anti-corruption operation. Today, I expect that the Parliament will adopt the law on National anti-corruption bureau.

Friends, it is our obligation in the framework of the implementation of the given Agreement.

Voting for this project will be the best evidence that we have already begun the implementation.

Like Khvylovy, we consider Europe as “psychological category that brings us to the great path of progress”.

Today, we confidently entered this European path. I’d like to remind – the start was difficult. But the finish will be victorious!