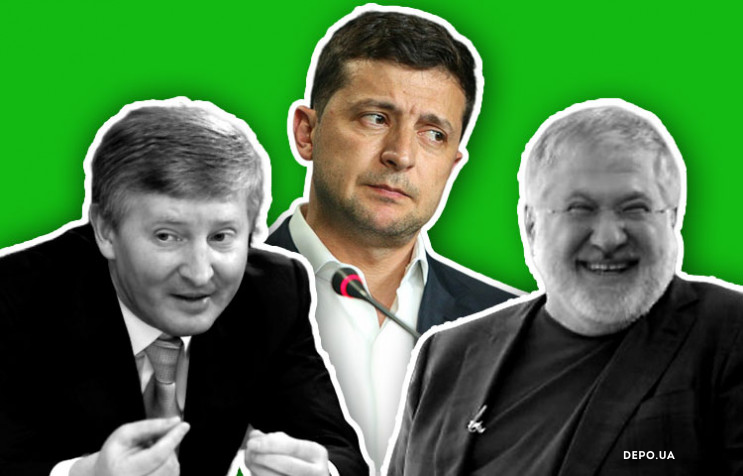 It’s becoming clear that Kolomoyskyi is losing his grip on Zelenskyi, instead the “best friend of all Ukrainian presidents” – Ukraine’s richest oligarch, Rinat Akhmetov is drawing nearer to him. A year after Zelenskyi was elected President, Ukrainian media “Ukrainska Pravda” puts a spotlight on the changing behind-the-scenes politics. UCMC picks the highlights, read on.

Volodymyr Zelenskyi, surrounded by various expert groups, presented himself to the wide audience in the role of a “mediator”. In the context of President’s relations with the oligarchs, this role model reminds of Leonid Kuchma’s times. “At the table with the oligarchs Zelenskyi did not see himself as a player, like Poroshenko did, but rather as a croupier. Same as Leonid Danylovych (Kuchma) once did, he takes no part in the game but is watching to make sure that everyone plays by the rules and no one pulls marked aces out of their sleeves,” “Ukrainska Pravda” proceeds.

Zelenskyi’s attempt to balance between the two biggest moguls of the country – Kolomoyskyi and Akhmetov, is the key trend of the President’s policies ahead of his first anniversary in office.

Akhmetov in 2019: losing everything. Last year it seemed like Rinat Ahmetov had lost everything and his political influence had come to an end. At the presidential elections neither his formal candidate Oleksandr Vilkul, nor his informal favorites Petro Poroshenko and Oleh Lyashko were able to win over Zelenskyi. At the parliamentary elections his party “Opposition Bloc” and Lyashko’s party failed to overcome the five per cent threshold.

As a result, in the Parliament, the richest Ukrainian is supported by just a few independent MPs of “Opposition Bloc” elected in single-mandate districts, led by Akhmetov’s business partner Vadym Novynskyi. There are several more MPs from “Batkivshyna” (Fatherland) faction, including Serhiy Taruta and Mykhailo Volynets.

Thus, at the start of the new political season Akmetov did not have the power that would correspond to the scale of his interests. However it did not last long.

In quite a short space of time, Rinat Akhmetov, as many times before, became indispensable to the Office of the President. Back in June 2019, when making an appearance on 1+1 TV channel, Zelenskyi said that he would be convincing the oligarchs to help the country. In his interview to “Ukrainska Pravda” last summer the President said that he had a meeting with Akhmetov. Back then the oligarch’s charity foundation bought 200 ambulance cars that were sent in the regions.

It was Akhmetov’s cautiousness and a proven record of keeping his promises to the authorities that earned him credits with the Office of the President. As soon as there is a need, he is already there, landing a hand. You need a plane to fly to Wuhan? Take “Shaktar’s” plane. You need assistance in fighting coronavirus? Here’s UAH 300 million (approx. USD 11,1 million).

Telling is the fact that Volodymyr Zelenskyi is no more a guest of TV shows on 1+1 channel owned by Kolomoyskyi, where he presented himself and his team during the election campaign. Zelenskyi now prefers Savik Shuster’s “Svoboda Slova” (Freedom of Speech) TV show on “Ukraina” channel, where he’s made feel comfortable.

Such a media channel is what Zelenskyi needs in the context of a possible war with Kolomoyskyi. The war has all chances to become systematic after the banking law is passed. Instead, Akhmetov is not just getting the approval of the President and his team, but also some kind of influence that is not yet fully obvious.

Government appointments from within Akhmetov’s orbit. After Honcharuk’s government resigned, Denys Shmyhal was appointed the new Prime Minister, he is a former top manager at Akhmetov’s DTEK company. Nevertheless, Zelenskyi does not consider him to be “Akhmetov’s person”. No one knows if this link from the past will matter in future.

Acting Minister of Energy Olha Buslavets was among the experts who once drafted the government order that granted a discount on gas purchase from “Naftogaz” to Akhmetov’s “DTEK Skhidenergo”. Besides, the head of the parliamentary energy committee Andriy Herus reminded that the directorate of the Ministry earlier headed by Buslavets, endorsed the notorious “Rotterdam+” formula during the presidency of Poroshenko.

The appointment may actually be Zelenskyi’s first move in the role of the oligarch’s croupier. He appointed “Akhmetov’s person” despite Kolomoyskyi’s vivid defiance. Meanwhile the temporary appointment is a chance to bargain away the Minister’s seat during the behind-the-scenes talks.

Volodymyr Zelenskyi is gradually starting to balance the oligarchs, making ad-hoc alliances. In short, the President is trying to take up the role of an arbiter, balancing and directing power, an approach similar to Kuchma’s multi-vector policy.