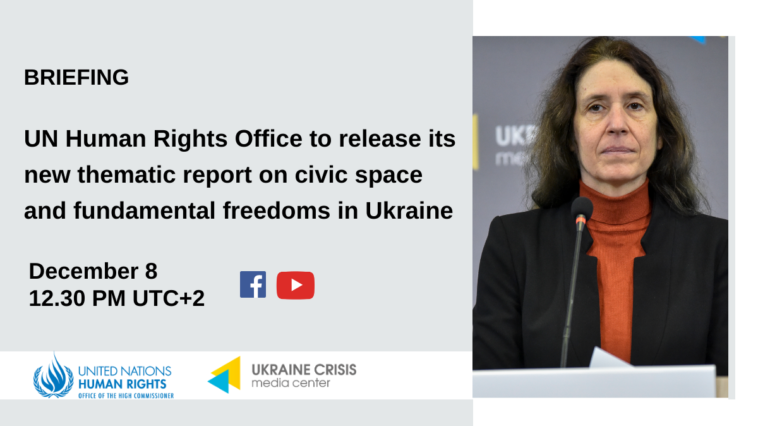 KYIV (7 December 2021) – UN Human Rights will release its new thematic report, prepared by the UN Human Rights Monitoring Mission in Ukraine (HRMMU), on the situation of civic space and fundamental freedoms in Ukraine.

Matilda Bogner, Head of Mission, will present the thematic report at a press conference at 14:30 on Wednesday, 8 December 2021, at the Ukraine Crisis Media Centre (2 Khreshchatyk Street, (Ukrainian House), Kyiv).

The report covers the period from 1 November 2019 to 31 October 2021. It is based on information collected through interviews with victims of human rights violations, witnesses, and defence lawyers; direct observation, including trial and assembly monitoring; analysis of corroborating information confidentially shared with HRMMU; official records, including court documents; open-source documents and video, photo and audio materials; and other relevant and reliable data.

The report looks at civic space and fundamental freedoms in Ukraine, with particular attention to freedoms of opinion and expression, peaceful assembly and association and the situation of human rights defenders, in territory controlled by the Government, territory controlled by self-proclaimed ‘Luhansk people’s republic’ and self-proclaimed ‘Donetsk people’s republic’ and in the Autonomous Republic of Crimea and the city of Sevastopol, Ukraine, occupied by the Russian Federation (Crimea).

The press conference will be in English, with interpretation into Ukrainian and sign language.

Background: Deployed in March 2014, the UN Human Rights Monitoring Mission in Ukraine monitors, publicly reports and advocates on the human rights situation in the country with the aim of fostering access to justice and bringing perpetrators to account. The Mission has seven offices around the country: in Kyiv, Donetsk, Kharkiv, Kramatorsk, Luhansk, Mariupol, and Odesa. The Mission has introduced remote monitoring of the human rights situation in Crimea, through its offices in Kyiv and Odesa. Every day, human rights officers speak to victims and witnesses of human rights violations throughout the country, including in territory controlled by self-proclaimed ‘republics’ and from Crimea.