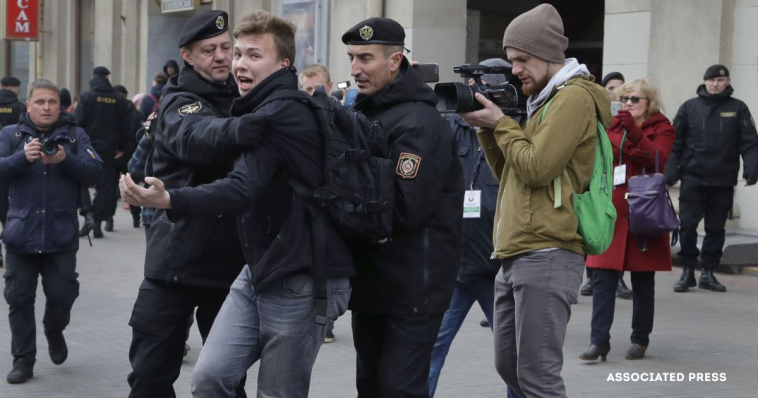 On June 3, the Belarusian state-run television channel “ONT” aired an “interview” with the arrested journalist Raman Pratasevich. He was “interviewed” by the chairman of the channel Marat Markov. In what appeared to look more like an interrogation, Pratasevich confessed to organizing illegal protests in Belarus in 2020. EU broadcasters stood firm not to reproduce the piece, deeming unacceptable an interview with a person in custody. The interview aired on television and released on YouTube, runs for over an hour and a half. Closing the talk, the host says it ran for “over four hours”. We take a look at what Pratasevich said, highlighting why his words are to be considered carefully.

What did Pratasevich say in the “interview”?

In the opening part of the talk, Pratasevich held in a pre-trial detention center of Belarus’s security service (KGB), said he was being interviewed of his own free will, and he was feeling “wonderful”. He also said that no make-up was put on him before the show. At the same time, Nasha Niva media outlet spotted the traces of handcuffs on Pratasevich’s wrists. At the end of the talk, Paratsevich covered his face with his hands and cried.

He said several times that he is cooperating with the investigation.

Pratasevich said he “pleaded guilty” over charges of organizing illegal protests immediately after the charges were brought and the evidence of his complicity was presented: “I openly admit that. I was one of those people who called (on social media) to take to the streets on August 9. (…) Those calls that I posted fueled unrest in the streets, and threw Minsk into three-day chaos (referring to the protests that swept the Belarusian cities following the presidential elections in August 2020 – edit.)”.

Pratasevich also said that he was not involved in running the “extremist” Telegram channel “Black Book of Belarus” exposing personal data of law enforcement staff. He did not deny that his girlfriend Sofia Sapega was an editor of the channel.

Pratasevich talked about Sviatlana Tsikhanouskaya’s campaign funding, his trip in Donbas, and Lithuania’s position on the Belarus opposition. There are conflicts inside the opposition movement, and his arrest was framed, Raman said.

Pratasevich admitted he took part in plotting an “attempt on the life” of Lukashenko: “I was supposed to be an intermediary between the mastermind and Tsikhanouskaya’s office.” He said he was disenchanted with the Belarus opposition leaders and did not want to stay in politics.

The founder of the opposition Telegram channel “Nexta” said he was criticizing Lukashenko a lot, but later he realized that he was doing all the right things. He also said he “undoubtedly” respects Lukashenko.

“Initially, I criticized him, but the further I waded into politics, the more I got to understand that many things Aleksandr Grigorievich (Lukashenko) was criticized for were attempts to pressure him. Excuse me for what I’ll say, but he often acted as someone who has balls of steel,” Raman Pratasevich said.

He also asked not to pass him over to the “LNR” group for interrogation.

He said he foresees the reaction of his allies to the interview and spoke of how he was feeling as the Ryanair flight was diverted. “(I felt) as if I were walking up the scaffold,” Pratasevich said.

Why Pratasevich’s words are not to be trusted?

Pratasevich was interviewed in custody, a week into his arrest and possible torture. His parents assume he was tortured.

What Pratasevich’s parents say. Raman’s father told AFP it pained him to watch the interview.

“I know my son very well and I believe that he would never say such things,” he told AFP. “They broke him and forced him to say what was needed,” he said.

Talking to “Current Time”, his father said that the interview follows a week of torture, and Roman was possibly under psychotropic drugs.

“Here, a correspondent on state television has more rights than a lawyer who has been denied access to Roman for more than five days. What can I say? That’s terrible. To me, as the father that’s very hard. Those who watched the film might have noticed Roman’s internal struggle between what he was told to say and what he would never say. You can see it on his face. I am sure those are the consequences of his more than week-long detention in the KGB’s pre-trial detention center, abuse, and torture. They attempted to strangle him, they beat him up, you can see the traces of handcuffs. I don’t event dare to think how long he was kept handcuffed. He was threatened. We don’t know where he is, maybe they even gave him psychotropic drugs. Nothing will stop our government,” Raman’s father said.

“State-run media are now labeling him as a neo-Nazi, fascist, extremist, and a bastard, while having no evidence whatsoever. What proves him being a neo-Nazi, a fascist, an extremist? As soon as Lukashenko caught him, the regime has been trying to shape his image in the media. I am not surprised that he is forced to say what they want him to. I don’t believe a word my son said,” he added.

“There are two Ramans Pratasevich – one is free, and the other one is held by the KGB. These are two different men. Raman Pratasevich whom we saw and heard is a different man. He says what he was told to say. It is clear that his words, the way he speaks, and the appraisal of Lukashenko is a result of torture, and the psychological and physical state that he has been put in. Lukashenko has not just put some people, but the Belarus nation into the torture chamber. Throughout the interview, we see Raman in an illogical state.”

“Whatever he says or does, we will do our utmost to free him. He is a hostage. When a person is held hostage, we cannot know for sure what their motives are,” Viačorka added.