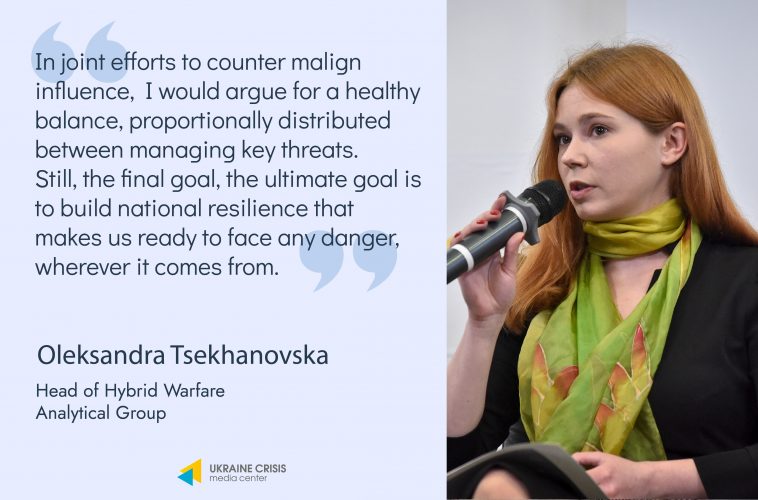 The Ukrainian expert community, while pertaining its focus on the more immediate threat posed by the Kremlin, should not ignore the issue of Chinese influence.

This was stressed by Head of Hybrid Warfare Analytical Group at UCMC Oleksandra Tsekhanovska at the roundtable “China as a rising power in Eastern Europe – the danger of its economic incentives and money”, organized by the European Values Center for Security Policy and Texty.org.ua.

“In joint efforts to counter malign influence, I would argue for a healthy balance, proportionally distributed between managing key threats. Still, the final goal, the ultimate goal is to build national resilience that makes us ready to face any danger, wherever it comes from,” she emphasized.

The event took place online on September 30 and focused on the economic aspects of the growing Chinese presence in Eastern Europe and the Chinese toolbox of expanding it through economic activities and investments.

Matěj Šimalčík, the executive director of the Central European Institute of Asian Studies (CEIAS) based in Slovakia, moderated the discussion.

The most crucial challenges regarding Chinese influence in Ukraine are similar in their nature to those faced by Ukraine’s European partners. Among them, according to Tsekhanovska:

Head of HWAG also recalled the situation with Motor Sich, over which Chinese investors have tried to seize control, emphasizing how it was a significant blow to our relations with Western partners.

Finally, Tsekhanovska decried the irresponsible claims made by some of the Ukrainian senior officials about “turning East” to “rebalance” Ukraine’s position should our Western partners reach agreements with Russia at our expense.

To learn about the threat of China’s hybrid influence in the countries of Eastern Europe, watch the full live stream of the roundtable, available via the European Values Center for Security Policy’s Youtube channel.