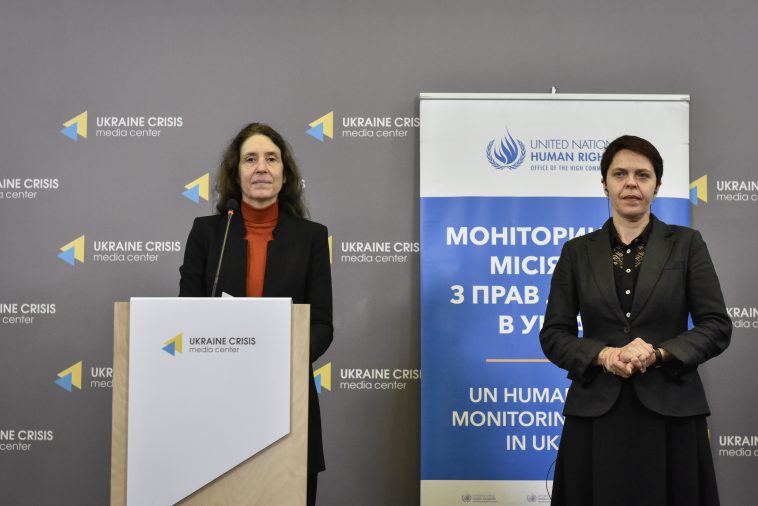 After considerable improvement of the security situation in eastern Ukraine following the strengthened ceasefire in July 2020, the number of civilian casualties and damage to civilian objects has risen and is now at levels seen prior to the strengthened ceasefire. A new report released by UN Human Rights today outlines the human rights situation in conflict and non-conflict areas throughout the country. The report is based on the work of the UN Human Rights Monitoring Mission in Ukraine (HRMMU) and covers the period of 1 February to 31 July 2021.

The report says that during the reporting period, UN Human Rights recorded 62 civilian casualties – 15 killed and 47 injured. This is a 51 per cent increase compared with the preceding six months. This trend is continuing, with an additional 16 civilian casualties (two killed and 14 injured) caused by active hostilities recorded between 31 July and 20 September. The numbers in August and September are the highest monthly figures since June 2020.

“Our civilian casualty records clearly demonstrate that the 27 July 2020 ceasefire resulted in a decrease in civilian casualties caused by active hostilities. It shows that is it possible to put in place an effective ceasefire that protects civilian lives.  If it has been done once, it can be done again. The shelling and shooting must stop and we call on all the parties to the conflict to fully implement measures to strengthen the ceasefire,” said Matilda Bogner, Head of HRMMU.

The report says that COVID-19-related movement restrictions in eastern Ukraine, mostly imposed by armed groups, resulted in a 95 per cent reduction of the number of crossings of the contact line. As these restrictions forced many people to cross from territory controlled by armed groups to Government-controlled territory via the Russian Federation, the adoption and enactment of a law, releasing civilians who have crossed this border on humanitarian grounds from administrative penalties, is a positive step by the Government of Ukraine.

“Due to these restrictions imposed by the self-proclaimed ‘republics’, people are not able to see their families.” Ms Bogner said. “Civilians living in settlements located on both sides of the contact line also expressed frustration about lack of access to water and sanitation, healthcare, public transport and passable roads. Priority should be given to ensuring such services for the conflict-affected population,” she added.

The report expresses concern over the adoption of a regulation that allows for the expropriation of immovable private property considered abandoned or left unclaimed in territory controlled by self-proclaimed ‘Donetsk people’s republic’. It not only risks violating housing rights of internally displaced persons, but may also endanger future restitution and creates additional constraints for the return and reintegration of internally displaced persons. The report also states that allegations that workers in territory controlled by self-proclaimed ‘Luhansk people’s republic’ have been threatened with a salary reduction or dismissal if they did not obtain Russian citizenship may amount to a form of discrimination and thus be contrary to international human rights law.

Regarding the draft law on the transitional period, recently registered in Parliament, the report notes that while it has some welcome provisions, the draft law is built around a definition of transitional justice that is not in line with international standards and does not ensure a victim-centered approach.

The report documented 12 cases of individuals believed to be linked or affiliated with self-proclaimed ‘republics’ detained by law enforcement officials in violation of international standards and national law, including in violation of the in flagrante procedure. UN Human Rights is also following the investigation into allegations of torture and ill-treatment in Oleksiivska penal colony No. 25 in Kharkiv, and is concerned by reports received that prisoners who complained of torture faced retaliation. In territory controlled by armed groups, 13 cases of conflict-related arbitrary detention were documented during the reporting period, eleven of which are ongoing.

“On 5 August, we were granted confidential access to two women and two men in the Luhansk SIZO. We welcome this development and hope that we will have continued access to detainees there. We also call for such access in territory controlled by the self-proclaimed ‘Donetsk people’s republic,” Ms Bogner added.

The report also notes that the decisions of the National Council for Security and Defence that resulted in the closure of television channels and restriction of access to online media are not in line with international standards on the right to freedom of expression.

The report highlights 22 cases of threats and attacks against journalists and other media workers, human rights defenders, LGBTI people or their supporters, and members of national minorities. Twenty-one hate speech incidents were also documented during the reporting period, six of which were directed against Roma and another six against LGBTI persons. The report also noted that in territory controlled by self-proclaimed ‘republics’, an atmosphere of fear and self-censorship prevailed. Criticism of those in charge and participation in public affairs continued to be discouraged, with UN Human Rights documenting three cases of arbitrary detention of individuals who expressed opinions on social networks.

“Persistent grave violations of human rights in territory controlled by self-proclaimed ‘republics’, must be immediately halted. Repression against those who express critical or independent views must stop, and fundamental freedoms must be respected,” said Ms Bogner.

With regard to economic and social rights, the report notes the lack of social housing and social services to address the needs of persons with disabilities and homeless people, as well as the difficulties for homeless persons without identification papers to access healthcare services.  Persons with intellectual and psychosocial disabilities in long-term care facilities also lacked access to adequate medical care, contact with the outside world, and employment opportunities.

Concerning the Autonomous Republic of Crimea and city of Sevastopol, Ukraine, occupied by the Russian Federation,[2] the report highlights that among other issues, the blanket requirement of pre-authorization for public assemblies continued to restrict the freedom of peaceful assembly. The report adds that Crimean Tatars were also affected by this, when law enforcement agencies issued warnings in advance of commemorative dates celebrated by Crimean Tatars.

“These and other continuing violations of international humanitarian law and international human rights law by the Russian Federation as the occupying Power must be addressed,”said Ms Bogner. “Crimean Tartars also continued to be targeted beyond the reporting period, with five Crimean Tatar men arrested in Crimea on 3 and 4 September, following searches conducted in their homes by Russian law-enforcement bodies,” she added.