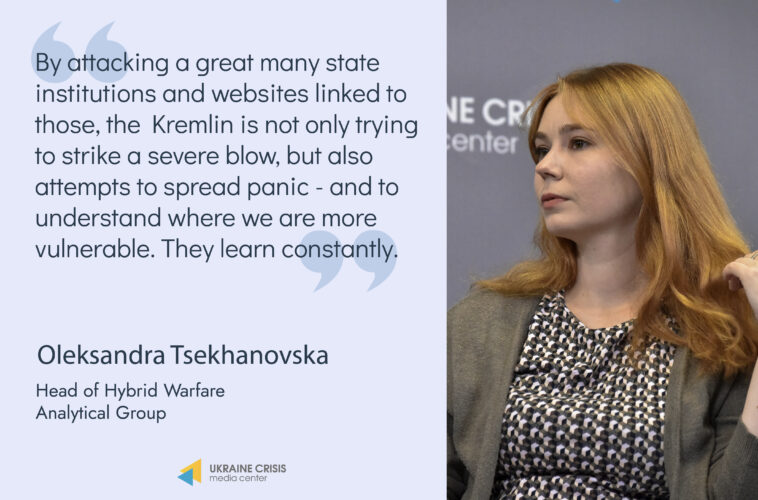 UCMC’s Hybrid Warfare Analytical Group took part in the “Hybrid Challenges of the Modern World, Ukraine and Threats” conference on January 27, 2022, attended by Ukrainian and foreign experts, specialists of the Armed Forces of Ukraine and representatives of relevant ministries, including:

The event was initiated by the “Mir & Co” Charitable Foundation with support of the International Renaissance Foundation (IRF) to discuss the agenda of hybrid threats in Ukraine and the world.

Head of HWAG Oleksandra Tsekhanovska spoke about the ways the Kremlin uses cyberthreats in the information and psychological operations against Ukraine.

She outlined the key resources the Kremlin relies on for conducting cyberattacks, among those – “information operations troops” controlled by the Russian Ministry of Defense, the Foreign Intelligence Service and the Federal Security Service, which conduct cyber operations. Besides, the Kremlin actively uses nonmilitary hackers, which lets it keep the “plausible deniability” in international operations.

As an instrument of hybrid warfare, cyberattacks:

However, psy ops or disseminating disinformation are rarely the main goal of cyberattacks. “By attacking a great many state institutions and websites linked to those, the Kremlin is not only trying to strike a severe blow, but also attempts to spread panic – and to understand where we are more vulnerable. They learn constantly,” stressed Tsekhanovska.

The expert also explained how the large-scale cyberattacks were used by Russia to discredit Ukraine’s statehood, support certain disinformation narratives, and execute pressure on the opponent using specific cases in the history of Russia’s cyber warfare against Ukraine. In particular, she emphasized the role of the recent attack on the websites of governmental agencies plays in the current escalation of Russia’s hybrid aggression.