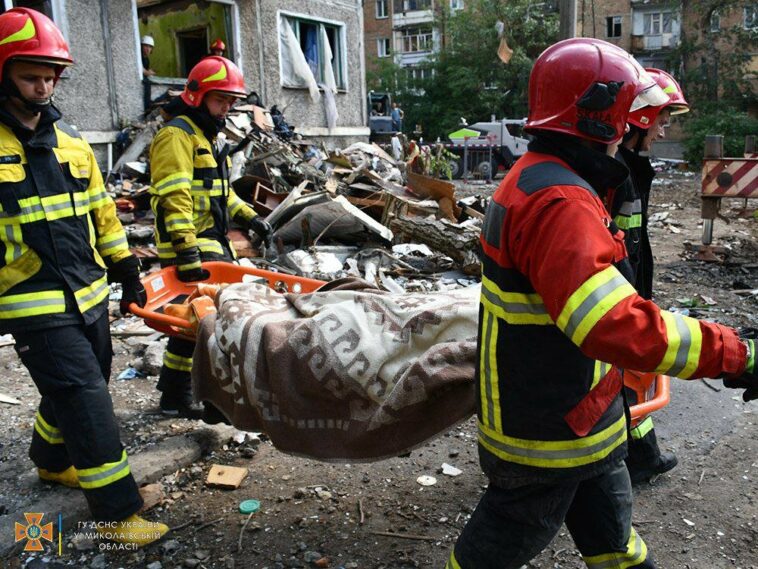 Missile strike on Odesa region. A Russian missile strike on a resort town in Odesa region killed 21, including a 12-year-old child. On the night of June 30 into July 1, Russian Tu-22 bombers fired hypersonic anti-ship cruise missiles X-22 Buria at Odesa region. The missiles hit a nine-story block of flats and two resort facilities in Serhiyivka village of Bilhorod-Dnistrovskyi district. Rescue workers pulled out seven people from under the rubble, including three children.

“Today, the Russian army conducted another brutal missile strike. A hypersonic anti-ship cruise missile hit a residential house in Odesa region. The missiles are designed to attack aircraft carriers and large warships,” President Zelenskyi said. The hit “was not accidental”, he underscored.

“That was Russia’s deliberate missile strike, Russia’s terror against our cities, villages, and our people, adults and children,” the President said.

On July 1, Russia launched 12 missiles on Mykolayiv. Ukraine’s air defense systems shot down some of them. The missiles hit commercial facilities. There were no casualties, head of the Mykolayiv regional military administration Vitaliy Kim said. One of the sites is seriously damaged, others suffered minor damage.

Russia continues to take grain away from occupied territories. Ukraine asked Turkey to detain a Russian-flagged cargo ship that arrived in the country carrying Ukrainian grain from the occupied territory in the south. “The Zhibek Zholy ship reached the port of Karasu from occupied Berdyansk. Based on instruction from the Office of Ukraine’s Prosecutor General, we asked the Turkish side to immediately apply measures,” Ukraine’s Ambassador to Turkey Vasyl Bodnar said.

“We communicate and cooperate closely with agencies of the Turkish Republic. I am confident that the decisions to be taken [by Turkey] will prevent attempts to violate Ukraine’s sovereignty,” the ambassador said.

The head of the so-called “temporary administration of Zaporizhzhia region” earlier “appointed” by Russia’s occupying forces said the ship carried away from Berdyansk 7,000 tons of Ukrainian grain.

Cargo vessel Zhibek Zholy was commissioned by the Kazakh-based company KTZ Express Shipping and built in Russia. It sails under the Russian flag.

“The inclusion of the culture of Ukrainian borscht cooking is not only an important step in preserving the identity of our Ukrainian nation, rich in cultural traditions and customs, but also extraordinary support for all Ukrainians who are now protecting our land from Russian invaders,” the Permanent Mission of Ukraine to UNESCO said. Ukraine applied for the inclusion of borscht in the UNESCO’s List of Intangible Cultural Heritage in the spring of 2021. The list already includes Ukrainian Petrykivka decorative painting, the tradition of Kosiv painted ceramics, and Cossack’s songs of Dnipropetrovsk region.

Georgia is one of the closest nations to Ukraine – both politically and historically. Our two countries have so lot in common – experience of Russian imperialism and agression, Euro-Atlantic choice, and desire to modernize ourselves.

Some time ago Georgia was even perceived in Ukraine as a kind of teacher and example. After the Revolution of Roses in 2003, the new government of Mikheil Saakashvili started ambitious reforms, which inspired many people here, in Ukraine.

In 2008, after the open and brutal Russian aggression against Georgia and de-facto annexation of Abkhazia and South Ossetia, all adequate and responsible forces in Ukraine understood the danger, which comes from Moscow. And, of course, all the sympathies were on the side of Georgian people.

However, now, during the full scale Russian invasion in Ukraine, this friendly image of Georgia in Ukrainian society became problematic. Georgian authorities hesitate to openly support Ukraine and criticize Russia. Georgia doesn’t hurry to join the anti-Russia sanctions. Devil is in the details, and all these details create concerns that a victim of the Russian aggression is now surviving some kind of Stockholm syndrome.