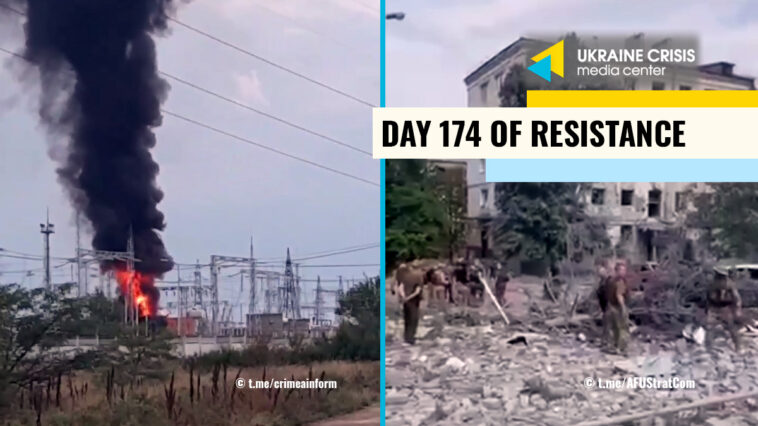 On Tuesday, August 16, explosions rocked occupied Crimea again. On the morning, there was an explosion at an ammunition depot near Azovske of Dzhankoy district. In Dzhankoy, an electrical substation caught fire. Explosions rocked an airbase in Simferopol district.

Head of the Crimean Tatar Mejlis Refat Chubarov was the first to report and confirm the explosions in Azovske (a village named Qalay until 1944). He said they were caused by a “precision strike on a Russian military base.” At the base, Russia stored munitions, and massed air defense systems and multiple launch rocket systems to be used in the war against Ukraine.

On Russian social media, there were reports of a fire on an electrical substation in the town of Dzhankoy.

The Russian Defense Ministry said the explosions in the Dzhankoy district were caused by “a fire that broke out at a fenced site for temporary storage of ammunition of one of the military units.” It later blamed the blasts on an “act of sabotage”. The blasts were caused by a failure to take “smoking safety precautions”, the Strategic Communications Department of the Ukrainian Armed Forces said, and “fire safety precautions”, the Ukrainian Air Force added.

On August 16, explosions also rocked a Russian airbase in Gvardiyske outside Simferopol where, according to Bellingcat, 24 Russian aircraft based.

That’s a second round of incidents in Crimea in the past eight days. On August 9, the occupied peninsula was taken by panic after a series of explosions rocked the airbase in Saky near resort village Novofedorivka. The occupation authorities of Crimea blamed the explosions on accidental detonation of munitions, cautious to admit a Ukrainian strike.

Blast kills up to 100 Russian troops in occupied Lysychansk

Up to 100 Russian troops were killed in a blast in occupied Lysychansk, head of the Luhansk regional military administration Serhiy Hayday told the Ukrainian Service of RFE/RL.

“Those were not mercenaries of the Wagner group, but regular Russian troops,” he said. They served in the 2nd army corps.

The strike damaged the runway and a few vehicles. The military personnel took shelter, and there were no casualties.

Finland’s government announced Tuesday it would reduce Russian visas by 90 per cent due to Moscow’s ongoing war on Ukraine.

Exceptions could be made for some groups like journalists, dissidents or activists, via a potential national humanitarian visa. Haavisto said his ministry would consult with the interior ministry over the scheme.

Meanwhile, the Latvian government agreed to amend eligibility criteria for renewal of the temporary residence permits issued to Russian citizens in Latvia. The coalition agreed on Tuesday that they would only be renewed on select occasions, Latvian Prime Minister Krišjānis Kariņš said.

Governmental decisions will follow in the coming weeks, he added.

The parliamentary secretary of the Ministry of Foreign Affairs Zanda Kalniņa-Lukashevicha said that a marriage with a citizen of Latvia is an exceptional case. A citizen of Russia or Belarus married to a Latvian citizen is eligible for renewal of the permit.

Russia systematically targets Ukrainian educational institutions with missiles, but the damage to education is not limited to just physical destruction: the occupation authorities force children to study according to the Russian curriculum, and threaten teachers with retaliation if they refuse to collaborate. Such is the case in Volnovakha, Donetsk region, occupied by the Russian army since March 11. Watch Ukraine In Flames #159 to learn about he most challenging educational issues in the town.