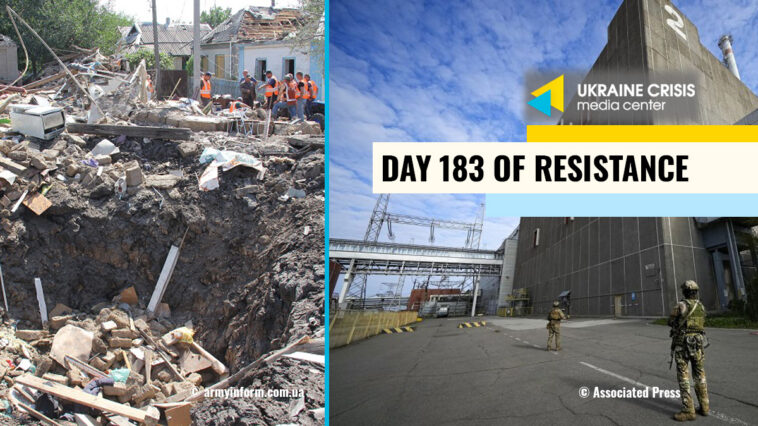 Recap of Russia’s attacks on Ukraine on Independence Day

On Ukraine’s Independence Day, an air raid alert was declared a total of 189 times. Air raid alerts in the regions lasted between three and 14 hours in total.

Air raid sirens sounded six times in western regions, and up to 12 times in Poltava region. In Kyiv, an air raid alert was declared seven times on Independence Day.

The regions that had the most hours in total of air raid alerts are Zaporizhzhia (14 hours), Dnipropetrovska (13 hours), and Kharkiv (11 hours). Luhansk region is under constant air raid alert.

A Russian missile strike on Chaplyne, in Dnipropetrovska region killed 25 people, deputy head of the Office of the President of Ukraine Kyrylo Tymoshenko said on Telegram on Thursday, August 25.

“Missile strikes that hit a residential area and a railway station killed 25, including two children. An 11-year-old boy was killed under the rubble, and a six-year-old child was killed in a burning car near the railway station. Thirty-one people were wounded,” Tymoshenko said.

The Russian Defense Ministry confirmed the missile strikes on Chaplyne and other sites.

On Thursday, August 25, the Zaporizhzhia nuclear power plant was disconnected from the energy grid as a result of what the Russian forces did, Ukraine’s nuclear energy company Energoatom said in a statement.

“The Zaporizhzhia nuclear power plant is currently powered from the Ukrainian energy grid through the line that connects it to the Zaporizhzhia thermoelectric power plant. The automation and safety systems are nominal. Works to connect one of the power blocks to the grid continue,” Energoatom said. The final transmission line linking Zaporizhzhia’s two operational reactors to the power grid was cut-off twice from fires at ash pits near the plant, the company explained.

After the barbaric siege of Mariupol, Russian occupiers prepare a fake “trial” over the captured Azov fighters who heroically defended the city. Watch Ukraine in Flames #168 to know how Russia neglects international humanitarian law and terrorizes Ukrainians with new massacres.