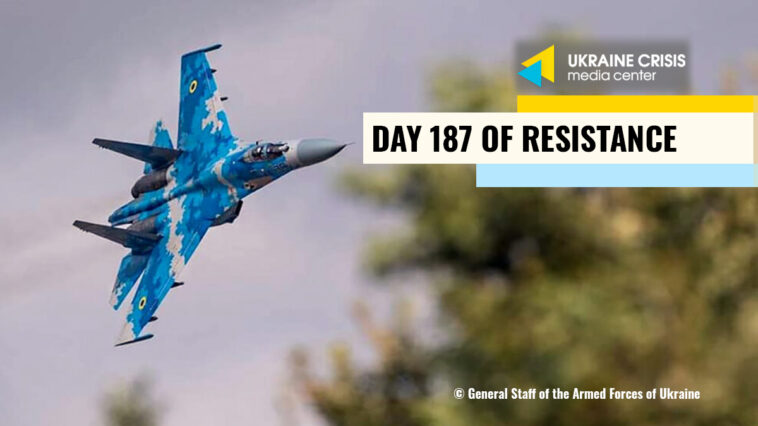 Oleksiy Kovalyov, a Ukrainian MP of the “Servant of the People” (Sluha Narodu) party who had earlier sided with the Russian forces in Kherson region, was killed in Zaliznyi Port on the night of August 28 into August 29. The situation began to progress rapidly. Later in the day on Monday, the Ukrainian troops went into the offensive in Kherson region, forcing the so-called “DNR regiment” and the Russian paratroopers to retreat from their positions. The Ukrainian Armed Forces began a offensive in many directions in the south of Ukraine, the Operational Command South (Pivden) said. The Ukrainian troops destroyed a Russian military base in Kherson and hit the Beryslav machine-building plant, a site where the Russian forces had stationed their equipment, ammunition, and troops.

IAEA mission on way to Kyiv

The International Atomic Energy Agency (IAEA) accepted an invitation by the Ukrainian government and formed a mission to visit the Zaporizhzhia nuclear power plant that is now captured by the Russians.

The mission is composed of 14 experts and led by the IAEA director-general Rafael Grossi. On Monday, the delegation travelled from Vienna to Kyiv and will begin inspection of the plant in the coming days.

On the afternoon, the Russian forces conducted a series of attacks on Mykolayiv. Some of the strikes hit apartment blocks and educational facilities. Reports of damages are being updated.

Ukraine celebrated its Independence Day on August 24th amidst fears that Russia will use this date for major strikes against Ukrainian targets, including Kyiv. However, the doomsday didn’t happen. Does this mean that Moscow has no real military tools to achieve a breakthrough in this war? This is the weekly digest of our “Explaining Ukraine” podcast. Hosts: Volodymyr Yermolenko, Ukrainian philosopher and journalist, chief editor of UkraineWorld.org, and Tetyana Ogarkova, Ukrainian scholar and journalist, in charge of international outreach at the Ukraine Crisis Media Centre.

Why is independent Ukraine crucial for the Western democracy? Ukraine in Flames #172

Since Ukraine gained its independence in 1991, the country’s sovereignty has been a target for Russian neo-imperialism. As a result, Russian aggression led to a full-scale war against Ukraine. Watch Ukraine in Flames #172 to know why Ukrainian resistance defends world security and how Ukrainian independence makes Russia weaker.