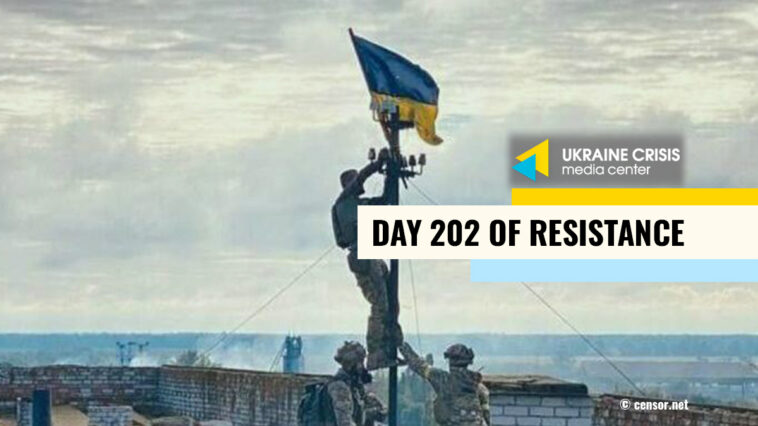 What is going on in the south

“Ukraine’s southern counteroffensive is continuing to have significant impacts on Russian morale and military capabilities in southern Ukraine,” the Institute for the Study of War (ISW) said in a report issued on September 12.

Satellite imagery of known Russian positions in Kyselivka, 15km northwest of Kherson, shows that all but four Russian vehicles have departed from previous forward positions, consistent with rumors that “DNR” troops have abandoned Kyselivka and moved back towards the Dnipro River, the analysts proceed.

“Kyselivka is an operationally significant location for Russian forces around Kherson City because it is the last major settlement along both the E58 highway and a railway line between current Ukrainian positions and Chornobaivka, the outermost part [to the north-east] of Kherson City,” the ISW’s report reads.

The Ukrainian Armed Forces had recaptured 3,800 square kilometers of land in Kharkiv region. They had liberated more than 300 towns and villages, Deputy Defense Minister of Ukraine Hanna Malyar said on television.

“The operation to retake Kharkiv region lasted several days, as was planned. Between September 6 and today, [the Ukrainian Armed Forces] liberated 3,800 square kilometers of land, and more than 300 towns and villages. About 150,000 people are free, they lived under occupation and were actually held hostage,” Malyar said.

The operation will continue until all of Kharkiv region is liberated, she added.

The Ukrainian troops are recapturing land in the east and south of Ukraine. In some areas, the Ukrainian Armed Forces had reached the border with Russia, the head of the Kharkiv regional military administration Oleh Synehubov said.

On Monday, the Ukrainian troops retook more than 20 villages.

Ahead of a government meeting, a number of ministries and the Kharkiv regional military administration were tasked to make available UAH 400 million (approx. USD 10.8 million) to fix the damaged sites and rebuild the deoccupied territories.

Dnipropetrovsk region, located at the crossroads of central, southern and eastern Ukraine, has suffered from missiles and artillery strikes like major parts of the country. Southern districts of the region are relatively close to the Zaporizhzhia Nuclear Power Plant, captured by the Russian military and turned into a constant security hazard not only for Ukraine, but for Europe as well. Citizens of Dnipropetrovsk region  try to deal with the direct challenges of the war, while welcoming more than 250,000 internally displaced persons from Russian-occupied territories. Ukraine In Flames #186 explores the lives of the Dnipropetrovsk region residents amidst the full-scale invasion.

For Our Freedom: Czech Republic supports Ukraine. Ukraine in Flames #187