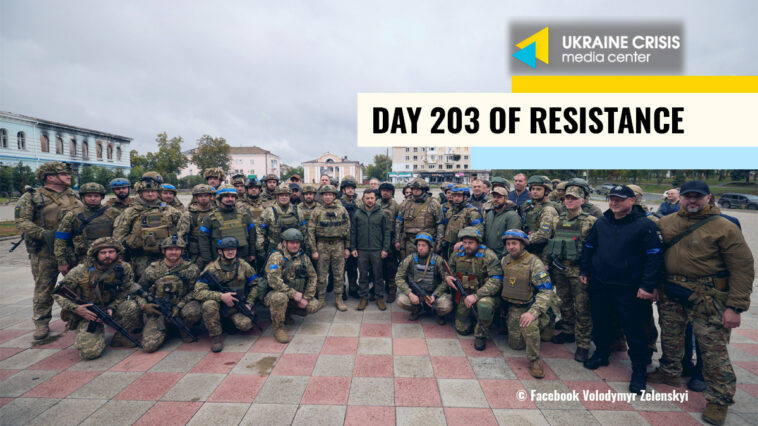 On Wednesday, September 14, Ukrainian President Volodymyr Zelenskyi paid a visit to Izyum, in Kharkiv region recaptured from the Russian forces.

“Today, a Ukrainian flag was hoisted in the city of Izyum that was liberated by Ukrainian paratroopers,” the 25th Separate Airborne Sicheslav Brigade said in a statement posted to Facebook. President Zelenskyi and Deputy Defense Minister Hanna Malyar attended the flag-raising ceremony alongside service members of the Ukrainian Armed Forces and other law enforcement agencies that had liberated the city several days earlier, the statement said.

Ukraine’s defense forces established fire control of almost the whole of Kherson region as the counteroffensive in the south continues.

“[The Ukrainian troops] maintain fire control of almost all of Kherson region. We continue our combat duties. Yet it is too early to speak about the victories as we need to take control of the retaken towns and villages,” spokesperson for Ukraine’s defense forces in the south Natalia Humenyuk said.

The Russian forces conducted a missile strike on Kryvyi Rih, in Dnipropetrovska region, head of the city’s military administration Oleksandr Vilkul said. The Russians launched seven X-22 cruise missiles from bombers, head of the Dnipropetrovska regional military administration Valentyn Reznichenko said. The strike seriously damaged water facilities, causing water outages in several districts of the city. Deputy head of the Office of the President Kyrylo Tymoshenko said that the Russian forces had fired eight cruise missiles. There are no civilian casualties, he added.

“That is a terrorist act against our people and against the city. The missiles precisely hit critically important sites that supply the people,” Tymoshenko said.

A Russian strike against water facilities aimed to cause a disaster emergency and create panic, he added.

Baltic states restrict entry to Russians over invasion of Ukraine. Ukraine in Flames #188

The decision of Baltic countries and Poland to coordinate a visa ban for most Russian citizens entering the EU via these states’ territory has been welcomed by Ukraine, as well as the suspension of the visa facilitation agreement with Russia by the European Council. However, are all these measures enough to make the Russian Federation citizens realize their common guilt for the brutal war against Ukraine? Learn in Ukraine In Flames #188.