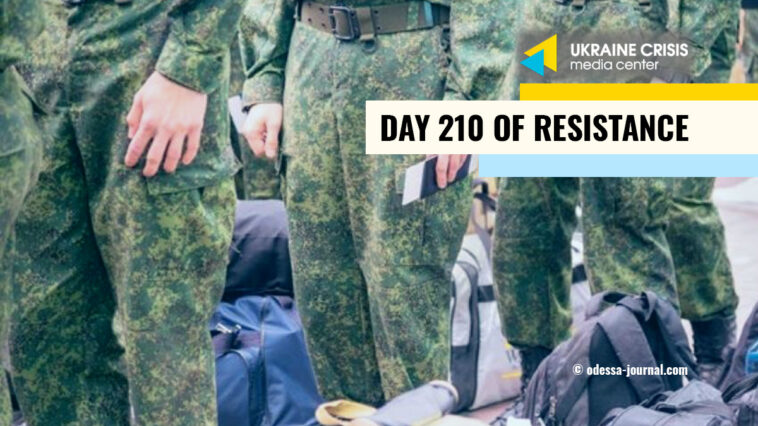 On the morning of September 21, Russian President Vladimir Putin announced a partial mobilization. He also voiced support for the sham referenda, as Russia will likely use the falsified results of these “votes” to illegally annex Ukraine’s occupied areas. Putin did not formally declare war, continuing to refer to a “special military operation” in Ukraine.

Putin’s national address was broadcast at 9 a.m. Moscow time. He was expected to be giving an address on Tuesday evening.

Following Putin’s address, Russian Defense Minister Sergei Shoigu said that Russia is at war not with Ukraine, but with the “collective West”. He said Russia would call as many as 300,000 reservists to military service. He also lowered Russia’s casualty count, saying that Russia had lost 5,937 troops in the war against Ukraine. The General Staff of the Ukrainian Armed Forces estimates the figure at 55,000.

“The enemy’s full-scale invasion did not intimidate us. What’s more, we united and duly responded. Russia announcing a mobilization proves that,” Zaluzhnyi said in a Telegram post.

Statements by the military and political leadership of the aggressor state will not affect Ukrainians’ resolve to fight for their freedom, the Commander-in-Chief of the Ukrainian Armed Forces emphasized.

“We will destroy everyone who will come with arms to our land, no matter if they volunteered or were drafted to serve,” Zaluzhnyi said.

On Wednesday evening, in Moscow, a group of protesters, mostly women, gathered on Arbat. Police began to arrest them.

In his speech to the UN General Assembly, U.S. President Joe Biden slammed Russia over Ukraine war and violation of the UN Charter.

A permanent member of the United Nations Security Council invaded its neighbor, attempted to erase a sovereign state from the map, Biden said.

He called Russia’s war on Ukraine “a brutal, needless war — a war chosen by one man, to be very blunt”.  Russia has shamelessly violated the core tenets of the United Nations Charter, he added. No one threatened Russia, and no one other than Russia sought conflict. This war is about extinguishing Ukraine’s right to exist as a state, plain and simple, and Ukraine’s right to exist as a people, Biden said. Ukraine has the same rights that belong to every sovereign nation. “We will stand in solidarity with Ukraine,” the U.S. President stated.

If nations can pursue their imperial ambitions without consequences, Biden proceeded, then “we put at risk everything this very institution [the UN] stands for”. The time has come for this institution to become more inclusive and increase the number of both permanent and non-permanent representatives of the Council. Members of the U.N. Security Council should refrain from the use of the veto, Biden said.

When we talk about prisoners of war or civilians captured during an armed conflict, we often imagine men. However, the Russian army captures Ukrainian women, too. According to the data of Human Rights Center Zmina, out of 300 people captured by the Russians in the newly occupied areas (such as Kherson, Zaporizhzhia and Kyiv regions), around 60 are women. These are sometimes pregnant women who are not provided with any medical support or appropriate conditions. Other women are not provided with female hygiene products and are forced to sleep in a cell with 17 men. Ukraine In Flames #195 explores Russia’s treatment of Ukrainian captive women and the approach that Ukraine should take to help document any rights violations, misconduct, and threats.