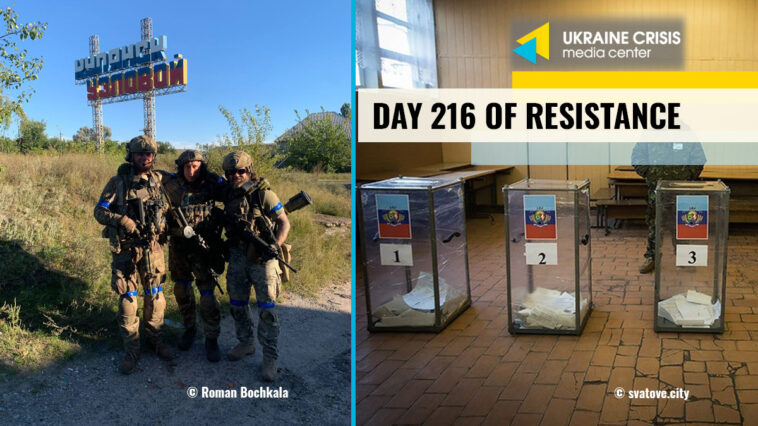 Russia’s Central Election Commission announced the first results of a sham vote that came from the polling stations that were also organized in Russia for Ukrainians who had fled to the country. They “voted” in favor of the occupied Ukrainian territories joining Russia, the Kremlin media RIA Novosti and Interfax said.

Ukraine may continue to use U.S. weapons in territories where Russia held sham vote, Blinken says

There will be no change for the U.S. in supporting Ukraine with weapons and equipment so that Ukraine continues to retake the territories seized by the Russians, where Russia also staged sham referenda, U.S. Secretary of State Antony Blinken said in a joint news conference with Indian External Affairs Minister Subrahmanyam Jaishankar Tuesday.

He responded to a journalist’s question if the U.S. will still allow the Ukrainian troops to use U.S. weaponry to defend against the Russians in the seized territories no matter what the outcome of the sham vote is.

“[The Ukrainian troops] continue to fight to retake the left-bank part of the Borivska hromada from the Russians. The fighting rages. The Ukrainian Armed Forces forced the enemy out, but the liberated territories are under hostile attacks,” the message reads.

In Pisky-Radkivski, the Ukrainian troops continue to detect Russian groups as they cleanse and demine the area.

The town of Kupyansk-Vuzlovyi on the left bank of the Oskil River was retaken by the Ukrainian troops, the head of the Kharkiv regional military administration Oleh Synehubov said Tuesday. “Six more per cent of our region’s territory is temporarily occupied. It decreased slightly [after Kupyank-Vuzlovyi was liberated],” Synehubov said.

Kupyansk-Vuzlovyi is one of the biggest railway nodes in Kharkiv region.

The Vinnytsia region is so far from the active ground fighting between the Russian army and Ukrainian defenders, some might think that it would be untouched by the war. But the region made the international headline several times since February 24: when a missile in the city center killed 32 people, when Vinnytsia’s television tower was struck, and when the airport was destroyed. The city has since been busy building new bomb shelters and housing IDPs. Every Vinnytsia resident is doing something for Ukraine’s victory, as the Editor-in-Chief of I-VIN Info, Tetiana Shcherbatiuk told Ukraine in Flames. Ukraine in Flames #200 gives an insight to life in the Vinnytsia region two months after the deadly bombing by Russia.