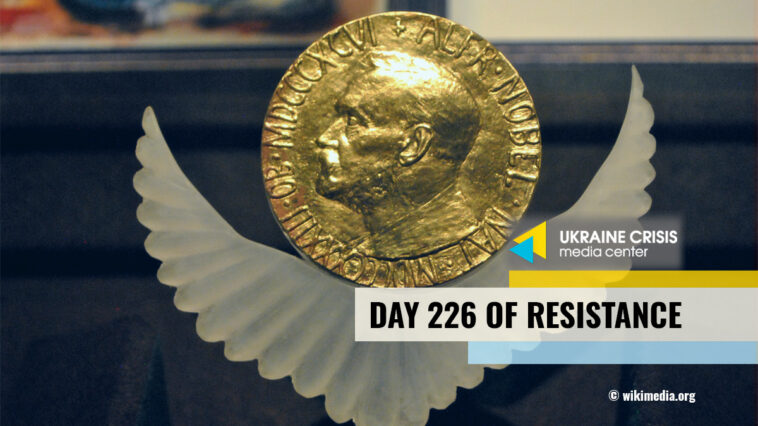 The 2022 Nobel Peace Prize was awarded to the Center for Civil Liberties in Ukraine, jailed Belarusian activist, chairman of the Viasna human rights center Ales Bialiatski, and Russian human rights group Memorial. “The Peace Prize laureates represent civil society in their home countries. They have for many years promoted the right to criticize power and protect the fundamental rights of citizens,” the Nobel committee said in a statement.

The Center for Civil Liberties is a Kyiv-based NGO established in 2007. Its mission is to assert “human rights, democracy, and solidarity in Ukraine and the OSCE region for the affirmation of human dignity”.

In Ukraine, the joy of acknowledgement of the efforts by the Center for Civil Liberties that the award brings was marred by indignation over the committee’s decision to “unite” the countries through the prize. It is seen as a move that echoes a propaganda narrative of the two aggressor states being Ukraine’s brotherly nations. Last year, Novaya Gazeta editor-in-chief Dmitry Muratov was awarded the Nobel Peace Prize, and earlier this year Russia made a full-scale invasion of Ukraine supported by Belarus.

For the second year in a row, the Nobel Peace Prize was awarded to representatives of Russia, a state that wages a violent war that is widely supported by its society. False narratives of Ukraine and Russia being brotherly nations and Ukraine having no grounds to exist as an independent state further encourage that.

The criticism does not run counter to Ukraine’s acknowledgement of the efforts by Russia’s Memorial and Belarus’s Viasna.

Valeriy Chaly, Chair of the Board at Ukraine Crisis Media Center said: “Awarding the 2022 Nobel Peace Prize to Russia’s Memorial, Belarus’s Ales Bialiatski, and Ukraine’s Center for Civil Liberties, the Norwegian Nobel Committee seems to be eight years late. [A decision] that would have been appropriate in 2014 (…), does not seem adequate in 2022.”

“The reason is not the laureates. We congratulate them and wish them success in protecting human rights. The reason is that this year is special. Beginning a war against Ukraine, Russia violated not just human rights, but fundamental ones – the right to life, liberty and security of person. No one shall be subjected to arbitrary interference with their home. Russia violated basic international treaties that keep the world going.”

“Today, a huge threat to peace faces the world. Human rights advocacy will unlikely change that. The Nobel Peace Prize should be awarded to those who restore rights that were violated and bring justice. In this sense an undisputable winner is the people of Ukraine and the Ukrainian Armed Forces.”

“If [the Nobel Committee] lags behind the span of history, it could have refrained from the statement that ‘(…) the Norwegian Nobel Committee wishes to honor three outstanding champions of human rights, democracy and peaceful co-existence in the neighbor countries Belarus, Russia and Ukraine.’”

“In the hot phase of Russia’s war and with Belarus’s complicity against Ukraine, it sounds like a slap in the face to the Ukrainians who give their lives for freedom of their nation and of all Europeans – for your freedom, respected members of the Nobel Committee. Refraining from awarding the prize this year, like during World War II, would have been a better choice,” Chaly said.

Russia should be expelled from the UN Security Council, head of the Center for Civil Liberties Oleksandra Matviychuk said after the organization was awarded the Nobel Peace Prize. She also called for an international tribunal to bring Vladimir Putin to justice.

“Today the armies speak, because the voices of human rights defenders were not heard in the region earlier. We were probably heard by the UN Human Rights Committee as we spoke, but certainly not in the rooms where decision makers sat,” Matviychuk said on Facebook.

“If we do not want to live in a world where rules are determined by someone with a more powerful military potential rather than the rule of law, things need to change,” she added.

The UN and its member states must reform the international peace and security system in order to create guarantees for all countries and their citizens without regard to their participation or non-participation in military blocks or to their military might, Matviychuk said.

Russia should be expelled from the UN Security Council for systematic violations of the UN Charter. “The UN and its member states must address the ‘accountability gap’ and secure a chance for justice to hundreds of thousands of victims of war crimes… It is necessary to create an international tribunal and bring Putin, Lukashenka and other war criminals to justice,” Matviychuk said.

During the so-called ‘partial mobilization’ campaign, Russia has illegally been mobilizing Ukrainian citizens in the occupied Ukrainian territories with Crimea included. Ukraine in Flames #211 expounds on how Russia implements the long-lasting colonial policy of eliminating the identity of the Ukrainian and Tatar people.