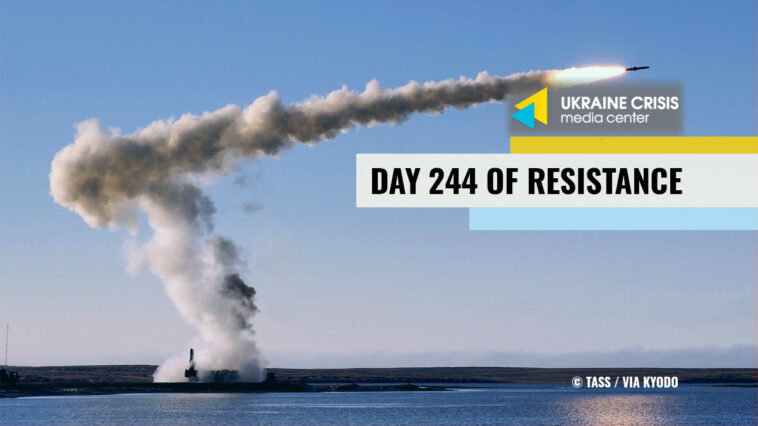 True peace that will end Russia’s war against Ukraine is only possible after Ukraine restores sovereignty over Crimea, President Zelenskyi said, addressing the First Parliamentary Summit of the Crimea Platform in Zagreb, Croatia by video link.

“It all began with Crimea. Restored sovereignty over Crimea will bring back true peace. Russia’s potential for aggression will be eradicated as soon as the Ukrainian flag will be hoisted in its rightful place – across the cities and villages in Crimea. Russia must stop using Crimea as a bridgehead [to launch more attacks]. There will be no more losses, and the world will become safer,” Zelenskyi said.

Years of occupation make it difficult to reintegrate Crimea, “but we’ll do that thanks to our cooperation,” the Ukrainian President said.

Bellingcat’s Christo Grozev and the team’s investigative partners The Insider and Der Spiegel were able to identify the programmers behind Russia’s massive missile strikes that have killed hundreds and deprived millions in Ukraine of access to electricity and heating. The secretive group is buried deep within the Russian Armed Forces’ vast Main Computation Centre of the General Staff, often abbreviated as ГВЦ (GVC). Russian media rarely mention the center. The function of the GVC has been opaquely described in military publications as “providing IT services” and “automation” to Russia’s armed forces.

Metadata records of the GVC director Maj. Gen. Robert Baranov showed a correlation between significant Russian cruise missile attacks in Ukraine, and incoming calls prior to the missile strikes coming from one particular number that the investigators identified as belonging to Lt. Col. Igor Bagnyuk.

The journalists reconstructed a team of 33 military engineers who appeared to report or communicate frequently with Lt. Col. Bagnyuk. The clandestine group of engineers appears to consist of three teams of approximately 10 engineers each, with each team dedicated to one specific high-precision missile type – ЗМ-14 (Kalibr, sea-launched), R-500 (aka 9М728, for Iskander systems, (ground) launched), and Kh-101 (air-launched).

The background of the military engineers working for the GVC is diverse. It includes both people who spent all of their career in the army or navy as well as young people who were recruited from civilian jobs usually linked to IT and computer science. Some of them were born in Ukraine.

Full text of the investigation is available at the link.

Addressing the Ukraine Recovery Conference in Berlin on Tuesday, President Zelenskyi urged the EU to establish a group of financial assistance to Ukraine to help rebuild its economy.

“I believe that we can now adopt a decision to establish a ‘financial Ramstein’ [referring to the Ukraine Defense Contact Group often called ‘the Ramstein format’ in Ukraine – edit.] to maintain our common stability. We need a financial coordination platform that will unite and direct all the efforts aimed at rebuilding our country after hostilities,” Zelenskyi said. Ukraine developed a transparent recovery plan that sets priorities – “it’s vital for Ukraine’s survival now,” he added.

Ukraine has not yet received “a single cent for fast recovery”. Zelenskyi urged the EU leaders to speed up respective decisions.

“We need to make a decision at this conference to cover next year’s state budget deficit. Ukraine cannot sustain a USD 38 billion deficit. These are salaries of teachers, doctors, social benefits, and pensions. Our cooperation is strong enough to cope with the task,” Zelenskyi said.

Research Fellow at National Institute for Strategic Studies Mykola Bielieskov, political expert, lawyer and director of the Institute of National Policy Yuriy Shulipa, and special envoy from Corriere della Sera Lorenzo Cremonesi discuss why and how Ukraine is winning the war against Russia.