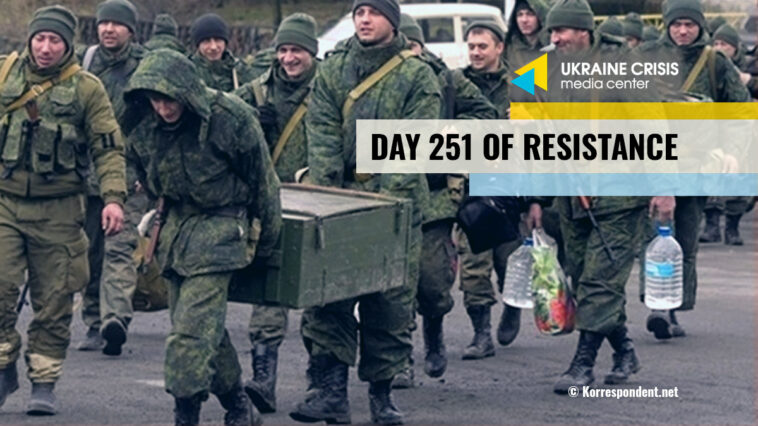 Russian attack helicopters were blown up at the Veretye airfield in Russia’s Pskov region, far from the Russia-Ukraine border and deep in the Russian rear. The incident got a lot of attention.

On the morning of October 31, pro-Kremlin Telegram channels reported the incident at the Veretye airfield located not far from the Russia-Latvia border. Three explosions rocked the airfield, a source told Russia’s REN TV.

Later, the Main Intelligence Department of Ukraine’s Defense Ministry confirmed a massive explosion at the Veretye airfield on the night of October 30 into October 31.

The Russian occupying government in Kherson region has moved its administration further south to Skadovsk. The Russian forces continue forced evacuation of civilians, the General Staff of the Ukrainian Armed Forces said in an evening report on November 1.

“The Russian occupying forces continue to forcibly move civilians in the temporarily occupied territory of Kherson region. They intimidate civilians with reports of possible blast of the dam of the Kakhovka hydroelectric power plant. Local residents are cut off from communication channels. The Russian occupying government in Kherson region has moved its administration to Skadovsk,” the statement said.

Poland-Ukraine friendship in face of Russia aggression. Ukraine in Flames #236