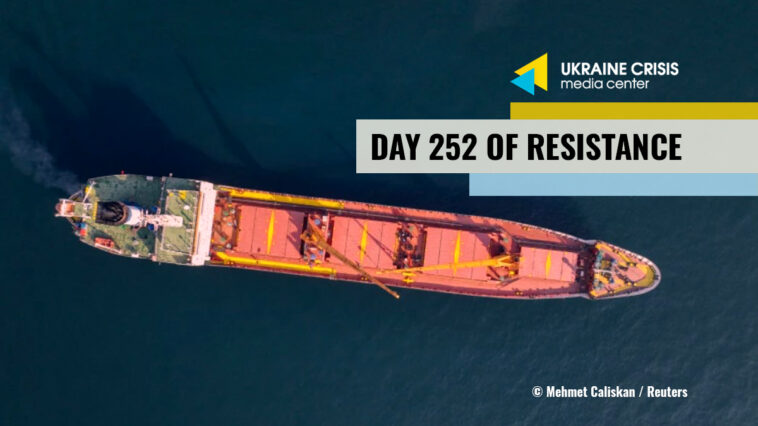 Russia’s Defense Ministry said Russia was resuming participation in the deal because it had received “written guarantees” from Ukraine that the safe-passage corridor wouldn’t be used for military purposes. Later, Russian President Putin said that Turkey not Ukraine directly provided the guarantees. He ordered the Defense Ministry to resume participation in the deal, he added.

Putin said Russia “retains the right to leave the grain export deal if Ukraine violates the guarantees”. Russia’s misleading statements are not new. Russia’s navy is a legitimate military target for the Ukrainian troops, if the Ukrainian Armed Forces are behind the attack on the warships of Russia’s Black Sea Fleet.

On October 29, Russia suspended its participation in the grain deal following explosions in Sevastopol that Russia blamed on Ukraine and the UK.

Russia’s withdrawal from the grain deal is an act of food blackmail, Ukraine said. Russia is pulling out under false pretenses, the statement added.

In a statement on November 2, Russia’s Foreign Affairs Ministry called on members of the nuclear club to avoid direct confrontation because of “dangerous attempts to limit vital interests”.

In the current situation that “resulted from irresponsible and shameless actions aimed at undermining our national security”, the primary task is to prevent any military confrontation between nuclear states, the Russian Ministry of Foreign affairs said.

“We call on the other five nuclear-weapon states to demonstrate their readiness to work on this priority and abandon dangerous attempts to limit each other’s vital interests, balancing on the brink of a direct armed conflict and encouraging provocations with weapons of mass destruction that can lead to catastrophic consequences,” the statement reads.

Senior Russian military leaders recently had conversations to discuss when and how Moscow might use a tactical nuclear weapon in Ukraine, contributing to heightened concern in Washington and allied capitals, according to multiple senior American officials, The New York Times said. President Vladimir V. Putin was not a part of the conversations, which were held against the backdrop of Russia’s intensifying nuclear rhetoric and battlefield setbacks.

But the fact that senior Russian military leaders were even having the discussions alarmed the Biden administration because it showed how frustrated Russian generals were about their failures on the ground, and suggests that Mr. Putin’s veiled threats to use nuclear weapons might not just be words.

Still, American officials said they had seen no evidence that the Russians were moving nuclear weapons into place or taking other tactical measures to prepare for a strike.

U.S. officials would not describe the scenarios the military leaders considered for use of a nuclear weapon.

Responding to a question if the nuclear war was possible as Russia kept threatening to use its nukes, the President said: “I’m not sure. I don’t even want to predict [Russia’s actions], because Russia likes to do the opposite…”

“I don’t think they [the Russians] are rational. Russia’s ultimatums or failure to meet their conditions are not linked to the use of [nuclear] weapons. These are unrelated things,” the President said.