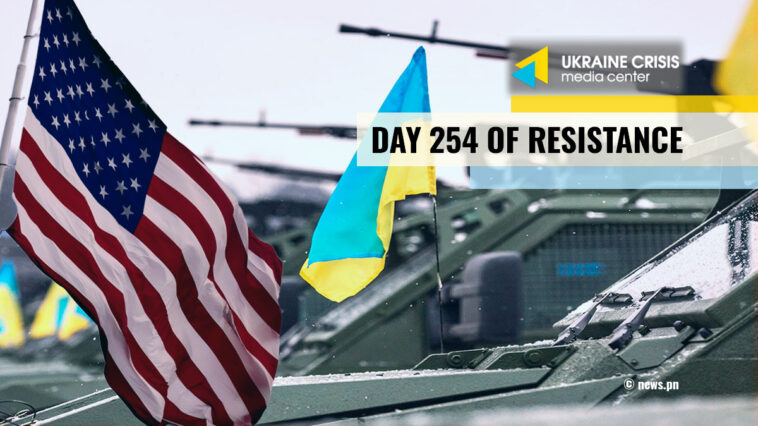 Ukraine’s Defense Minister Oleksiy Reznikov said he does not rule out that the Russian forces could retreat from Kherson to the left bank of the Dnipro.

A 24-hour curfew was imposed in Kherson on Friday, Russian-installed deputy governor of the region Kyrylo Stremousov said. Later, he edited his message posted to Telegram to delete the statement on the round-the-clock curfew.

In his address, Stremousov said “Ukrainian military equipment was spotted in some areas”. He said there’s a risk of “terrorist acts and provocations” and urged the residents to leave the city. Stremousov also said that the Russian forces “will go on an offensive” on the Mykolayiv and Odesa axes.

A Russian attack on Friday, November 4, damaged a DTEK Energo energy facility, the company said in a statement.

“The Russian forces continue to conduct systematic terrorist strikes against Ukraine’s civilian and energy infrastructure. Today, a missile attack damaged an energy facility of DTEK Energo,” the statement reads. It was the twelfth attack on a DTEK facility in the past month.

There were no casualties, according to preliminary information. But the power equipment of the enterprise was significantly damaged.

“After the strikes end, the company’s employees will promptly begin to eliminate the consequences and resume work. For safety reasons, only critical employees are present at the facilities. All others work remotely,” DTEK said in a statement.

The Pentagon will pay for the Czech Republic to upgrade 45 Soviet-era T-72 tanks for use in Ukraine, and the Netherlands will fund the refurbishment of another 45 Czech T-72 tanks, Deputy Pentagon Press Secretary Sabrina Singh said. Some of the tanks will be available to Ukraine before the end of December, with additional deliveries to be completed by next year. The package also includes Phoenix Ghost tactical unmanned aerial systems, and 40 armored riverine boats.

Voices of Ukrainian Future: next generation living through of the war. Ukraine in Flames #239

Russia brought active and violent war to the lives of Ukrainians. Russians bomb peaceful cities and mercilessly destroy civilian infrastructure. Obviously, all that severely traumatize our youngsters, and leave mental and physical wounds on our most vulnerable. Watch Ukraine in flames #239 to hear about their experience of this war, their fears, hopes and dreams directly from our young ones.