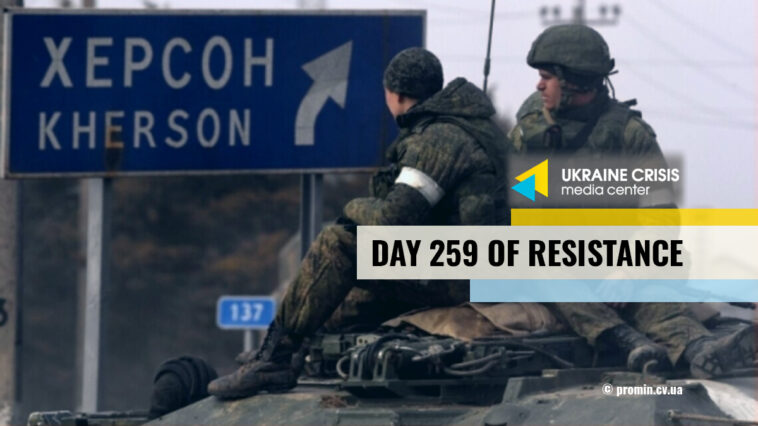 Is Russia really pulling out from Kherson?

Commander of Russia’s forces in Ukraine Sergei Surovikin said that Russia is moving forces to the left bank of the Dnipro leaving Kherson.

“In these circumstances, the most sensible option is to organise the defense along a barrier line along the river Dnipro. (…) The decision to defend on the left bank of the Dnipro is not easy, but at the same time we will save the lives of our military personnel and the combat capability of our forces,” Surovikin is quoted as saying by RIA Novosti.

“The troops will perform the maneuver in the nearest time, and the units will take defensive positions on the left bank of the Dnipro,” he said.

In mid-October, Surovikin said he did not rule out “difficult decisions” in the face of the Ukrainian advance toward Kherson.

A member of the Russian-installed administration in Kherson region Kyrylo Stremousov said that the Russian forces will likely retreat to the left bank of the Dnipro. On November 9, he was reportedly killed in a car accident, Russian sources said.

At the same time, advisor to the head of the Office of the President of Ukraine Mykhailo Podolyak said that Russia’s retreat from Kherson is a bluff. Instead, Russia draws additional forces to the region, he tweeted.

“Actions speak louder than words. We see no signs that Russia is leaving Kherson without a fight. A part of the [Russian] group is preserved in the city, and additional reserves are charged to the region. [Ukraine] is liberating territories based on intelligence data, not staged TV statements,” he said in a tweet.

On November 9, the European Commission proposed an unprecedented support package for Ukraine of up to EUR 18 billion for 2023. This will come in the form of highly concessional loans, disbursed in regular instalments as of 2023.

“This stable, regular and predictable financial assistance – averaging EUR 1.5 billion per month – will help cover a significant part of Ukraine’s short-term funding needs for 2023, which the Ukrainian authorities and the International Monetary Fund estimate at EUR 3 to EUR 4 billion per month,” the European Commission said in a statement.

The support put forward by the EU would need to be matched by similar efforts by other major donors in order to cover all of Ukraine’s funding needs for 2023.

Thanks to this package, Ukraine will be able to keep on paying wages and pensions and maintain essential public services running, such as hospitals, schools, and housing for relocated people. It will also allow Ukraine to ensure macroeconomic stability, and restore critical infrastructure destroyed by Russia.

Support under the instrument will be accompanied by reforms, to further enhance the rule of law, good governance, anti-fraud and anti-corruption measures in Ukraine.

On November 9, the Day of Ukrainian Literature and Language, we discuss all things Ukrainian language and culture with the Professor of Russian and Slavic Linguistics at Pace University in New York Andriy Danylenko, the Associate Professor at the V. Vynnychenko Central State Pedagogical University in Kropyvnytskyi Olha Kyryliuk, writer and translator Andrij Bondar, and Doctor of Philological Science at the National University of Kyiv-Mohyla Academy Orysia Demska.