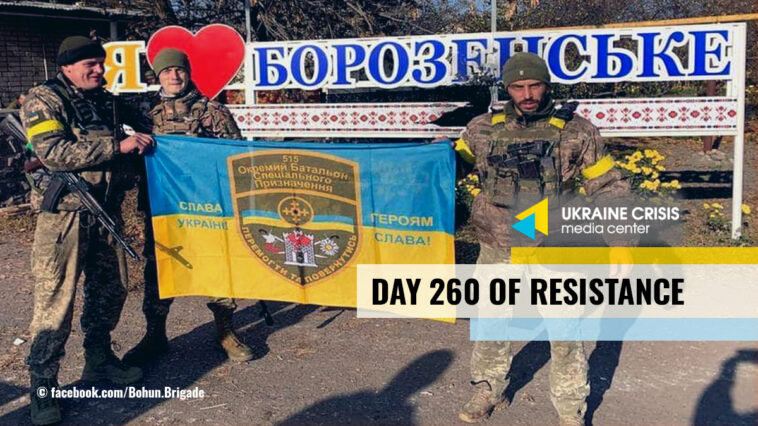 On November 9, Ukraine retook control of 12 towns and villages on the Kherson axis.

“Only during the past day in the direction from Petropavlivka toward Novoraisk, Ukraine’s Defense Forces advanced seven kilometers, regained control of six towns and villages, recapturing up to 107 sq. km of Ukrainian land,” Commander-in-Chief of the Ukrainian Armed Forces General Valeriy Zaluzhnyi said.

“[The Ukrainian troops] advanced seven kilometers in the direction from Pervomaiske toward Kherson, retook control of six towns and villages, recapturing 157 sq. km of land,” he added.

Since October 1, on the Kherson axis, the Ukrainian troops had advanced up to 36.5 km into Russian defense lines, Zaluzhnyi said. The total amount of territory returned to Ukrainian control stands at up to 1,381 sq. km. Ukraine regained control of 41 towns and villages.

On the Kherson axis, the Ukrainian Armed Forces destroyed the Russian supply lines and disrupted their supply system, Zaluzhnyi said. Russia was left with no other option but to resort to fleeing, he added.

The Commander-in-Chief of the Ukrainian Armed Forces said he could not confirm or deny reports of Russia’s withdrawal from Kherson.

Russia wants to turn Kherson into a “city of death”, advisor to the head of the Office of the President of Ukraine Mykhailo Podolyak said in a tweet.

“Russian military mines everything they can: apartments, sewers,” he said. The Russian forces plan to shell Kherson from the other side of the Dnipro, turning the city into ruins. “This is what the ‘Russian world’ looks like: [they] came, robbed, celebrated, killed ‘witnesses’, left ruins and left,” Podolyak said.

On November 9, on the Luhansk axis, the Ukrainian troops advanced up to two kilometers in some areas, deputy head of the Main Operations Directorate of the General Staff Oleksiy Hromov said in a news conference on November 10.

“Ukraine’s Defense Forces continue to liberate the Ukrainian land from the occupying forces. In the past day, in Luhansk region, [the Ukrainian troops] advanced up to two kilometers in some areas,” Hromov said.

Ukrainian journalist and activist Zoya Kazanzhy, professor at the Department of Philosophy of the Odesa Mechnikov National University Oksana Dovgopolova, and Ukrainian artist Matvey Vaisberg discuss the topic of decolonization of Ukrainian culture.