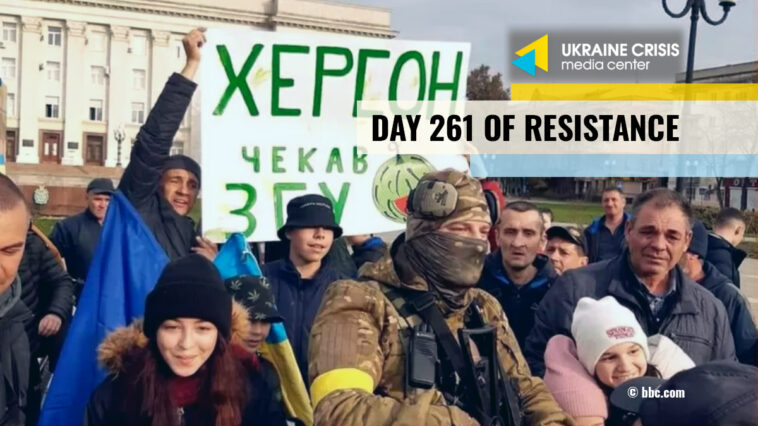 On Friday, November 11, the Ukrainian Armed Forces entered Kherson amid Russia’s claims of “complete withdrawal” of its troops from the right (western) bank of the Dnipro.

Russia’s Defense Ministry said its troops finished withdrawing from the western bank of the river at 5 a.m. “Not a single unit of military equipment or weapons have been left on the right bank,” the statement said, contradicting reports by the Ukrainian troops.

On Friday reports spread of the Antonivskyi bridge across the Dnipro being destroyed allegedly by retreating Russian forces.

In the afternoon, first photos of the Ukrainian troops in Kherson were posted to social media. Ukrainian flags were flying in central Kherson.

In an interview with Radio NV, advisor to the head of the Office of the President Mykhailo Podolyak assumed that Brigadier General Oleksandr Tarnavskyi, commander of the operational group Sloboda will soon share the details of de-occupation of the right bank of the Dnipro.

All of Mykolayiv region returns to Ukrainian control, except Kinburn Spit, Kim says

Kim said he will further update the residents of prospects to restore supply of drinking water in Mykolayiv. He also said he is happy and proud of the people of Kherson.

Ukraine secured the release of 45 members of the Ukrainian Armed Forces in another prisoner swap on Friday, November 11.

“Another POWs swap. We managed to free 45 AFU soldiers [of the Ukrainian Armed Foces] and get back to Ukraine bodies of two fallen defenders,” head of the Office of the President Andriy Yermak twitted.

Podcast Explaining Ukraine. Ukrainian universities during the war: a struggle for survival?

Ukrainian higher education is facing enormous challenges during this war. Universities have been relocated from temporarily occupied territories and territories with active fighting to more safe regions of Ukraine. Many faculty members and students have moved abroad, and are now continuing their instruction and studying online. What can and should be next? Learn more from the new episode of the “Explaining Ukraine” podcast. This episode is hosted by Tetyana Ogarkova, a Ukrainian scholar and journalist, and head of the international department at Ukraine Crisis Media Center. Tetyana’s guest is Yevhen Nikolaiev, an expert of the Education Analytics think tank.

Germany continuously supports Ukraine. Both on the state and societal levels. Watch Ukraine in flames #246 to discover historical preconditions of the current reactions and attitude of the general public; as well as the essence of the discussion around the increasing supply of heavy weaponry to the Ukrainian frontlines.