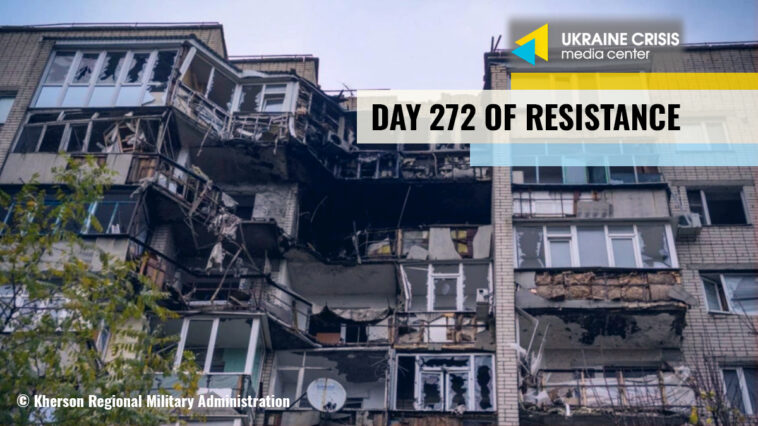 Three people were killed as Russia shelled Kherson on Tuesday, November 22. One person was injured, and one more was under the rubble, the Kherson city council said on Telegram. Russian artillery hit 11 targets in the city, a report of 3 p.m. said.

The shelling damaged a number of private houses, causing two fires. The shelling also hit a gas pipeline. No details of the damages were available. A day earlier, Russia’s shelling of Kherson killed two and injured seven civilians.

In her address to the Kherson residents, Vice Prime Minister – Minister for Reintegration of the Temporarily Occupied Territories Iryna Vereshchuk urged them to use a state-run program to evacuate for winter.

The Ukrainian government has established more than 4,000 “invincibility centers” that will open if power is lost for a long time.

In a nightly address on November 22, President Zelenskyi said: “We are rolling out our new ‘invincibility points’ project across the country. We have already set up more than 4,000 sites and are planning more.”

“If there are massive Russian strikes again and electricity supply cannot be restored within hours, ‘invincibility points’ will be activated.”

“[People could access] all basic services there, including electricity, mobile communication services, internet, heat, water, and first-aid kits. The facilities will have free and round-the-clock access,” the President said.

The website nezlamnist.gov.ua shows a map of the facilities, and is constantly updated.

Russian-installed administration in Crimea reported a drone attack and the work of air defenses as explosions rocked Sevastopol and Yevpatoriya, Russian sources and Ukraine’s Suspilne.Krym said.

Sounds of explosions were audible in Sevastopol and Yevpatoriya, Suspilne.Krym said, quoting reports by local residents.

Dull explosions and several loud ones were audible in the western part of Yevpatoriya, the residents said. In Sevastopol, explosions were heard in the north of the city as air defenses were allegedly deployed.

Videos capturing loud booms and the glare of bright explosions were posted to local Telegram channels.

Ukraine’s Revolution of Dignity: Maidan 9 years on. Ukraine in Flames #256

Director of the National Museum of Revolution of Dignity (Maidan Museum) Ihor Poshyvailo, wife of fallen Maidan protester Volodmyr Boikiv, Natalia Boikiv, and participant of the Maidan Maryna Hohulia discuss what Maidan means to them.

How Ukraine makes films during war. Ukraine in Flames #257