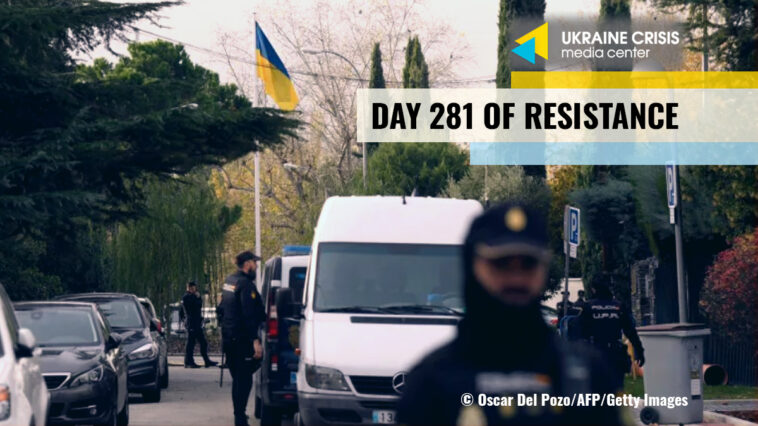 On Wednesday, November 30, a package sent to the Ukrainian Embassy in Madrid exploded upon opening. The package was addressed to the country’s ambassador to Spain, Serhiy Pohoreltsev. Following the incident, Ukrainian Foreign Minister Dmytro Kuleba ordered stepped-up security at all of Ukraine’s foreign embassies abroad.

As it later turned out, multiple explosive parcels were sent to several government agencies and an arms factory in Spain. Two further Ukrainian embassies received threatening letters on Wednesday, Kuleba said on the sidelines of the OSCE Ministerial Council in Lodz, Poland, on December 1. The episodes are part of a targeted large-scale campaign against Ukraine, he added.

In the occupied part of Zaporizhzhia region, Russia is withdrawing its troops from Mykhailivka, Polohy, and Inzhenerne. In the village of Burchak, the Russian forces offered the residents to evacuate, the General Staff of the Ukrainian Armed Forces said in an evening report on December 1.

“According to our data, some Russian units are withdrawing from the temporarily occupied territory of Zaporizhzhia region. The Russian forces prepare to evacuate the personnel of the occupying administrations,” the report reads.

Russian units that were based at a local police station and a school moved out of Mykhailivka. In Polohy and Inzhenerne, they leave the houses where they were quartered, carrying away the stolen goods. In the village of Burchak, the Russians created a registry for the so-called voluntary evacuation, the General Staff said.

There are no doubts that Ukraine will win in the war against Russia, U.S. Ambassador to Ukraine Bridget Brink was quoted as saying by European Pravda at the Kyiv Security Forum on Thursday.

There are three elements of the victory, she added. Ukraine will restore its territorial integrity and sovereignty in the spirit of the UN Charter. Brink said she saw traces of the Russian war crimes as she travelled across Ukraine. Those responsible for the crimes must be held to account, she said. Russia must pay reparations. The U.S. and the world are committed to helping Ukraine to rebuild, the U.S. Ambassador to Ukraine said.

NATO Secretary General Jens Stoltenberg earlier said that the Alliance’s most immediate and urgent task is to ensure that Ukraine prevails in the war. Membership talks will come next.

Five residents of Kherson describe what life under Russian occupation was like for them.

05:06 – People were undressed and tortured