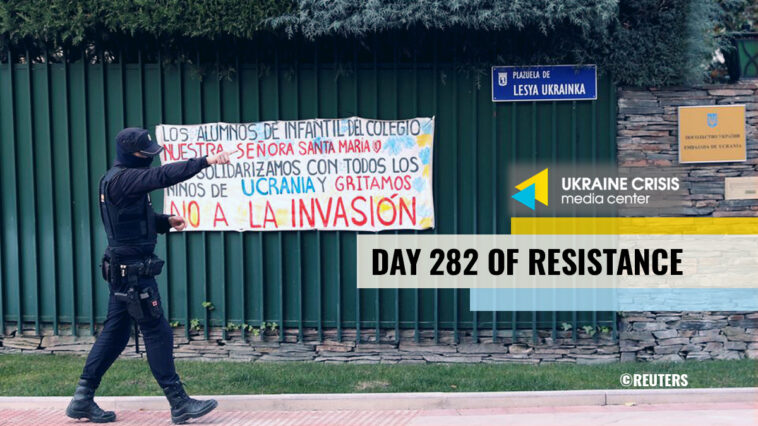 Following a letter bomb incident in Spain earlier this week, Ukrainian embassies in Hungary, the Netherlands, Poland, Croatia, Italy, Spain, the consulates general in Naples and Krakow, and the consulate in Brno received blood-soaked envelopes containing animal eyes. “The packages were soaked in a liquid of a characteristic color and had a corresponding smell. We are examining the meaning of this message,” spokesperson for the Ministry of Foreign Affairs of Ukraine Oleh Nikolenko said.

There is a “well-planned campaign of terror and intimidation of Ukrainian embassies and consulates,” Ukraine’s Foreign Minister Dmytro Kuleba said. “Unable to stop Ukraine on the diplomatic front, they are trying to intimidate us. (…) These attempts will fail. We will continue to work efficiently for Ukraine’s victory,” the minister said.

The Russian troops are massing in and around Melitopol, the mayor of Melitopol Ivan Fedorov said in a news conference on December 2. “It is too early to say that they [the Russian forces] are retreating from towns on the Zaporizhzhia axis,” Fedorov said. The Institute for the Study of War earlier said that the Russian forces may be withdrawing personnel from positions closer to the frontline in Zaporizhzhia region “to reduce the impact of increasing Ukrainian strikes on Russian manpower and equipment concentrations”.

Ukrainian energy system nears recovery from system disruption, head of the national energy company Ukrenergo Volodymyr Kudrytskyi said in an interview with RFE/RL published on December 1. After seven waves of Russian missile strikes including the latest massive bombardment on November 23, the Ukrainian energy system reached a plateau. “Power plants are gradually increasing generating capacity that they lost in the latest strike,” Kudrytskyi said. “At the moment, the deficit [of the grid’s capacity] is at approximately 27 per cent.”

Looking ahead, the head of Ukrenergo said: “If there are no massive strikes, we will see the situation improving already this weekend. (…) Several days from now, we’ll have a larger generating capacity that could cover the deficit.”

Russians deplete forces in offensive on Bakhmut, Institute for the Study of War says

Russian offensives around Bakhmut, in Donetsk region, are consuming a significant proportion of Russia’s available combat power, potentially facilitating continued Ukrainian counteroffensives elsewhere, the Institute for the Study of War said in a report on November 30. The Bakhmut direction is a key one where the Russians concentrate offensive operations, the General Staff of the Ukrainian Armed Forces said Friday.

“Even if Russian troops (…) force a controlled Ukrainian withdrawal from the city (as was the case in Lysychansk), Bakhmut itself offers them little operational benefit. The costs associated with six months of brutal, grinding, and attrition-based combat around Bakhmut far outweigh any operational advantage that the Russians can obtain from taking Bakhmut,” the Institute for the Study of War said.

How Ukrainians help homeland from abroad? Ukraine in Flames #267

In the global era of technology, there is no need to be physically present in Ukraine in order to assist the Motherland on its way to victory. The aid can come in many different shapes and forms, and Ukrainians are actively helping from abroad. Some fundraize money and ship humanitarian aid or tactical equipment to Ukraine. Others organize festivals to educate and raise awareness through cultural diplomacy. Third tend to the need of vulnerable groups of the population. Watch Ukraine in flames #267 to find how Ukrainians support their homeland in various ways, each in their own area of expertise, but with the common goal of bringing Victory day closer and closer.