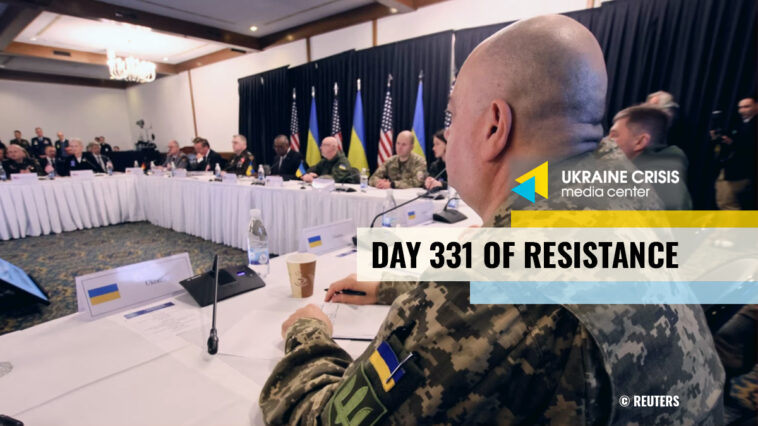 Results of Ramstein meeting: frustration toward Germany, but more assistance to come

On January 20, the Ukraine Defense Contact Group convened at Ramstein Air Base in Germany. The meeting is the eighth in a series of meetings. Defense ministers of the countries members of the group failed to agree on main issue – the supply of German-made Leopard battle tanks to Ukraine. Yet the allies pledged more equipment that could be used against any potential Russian offensive in Ukraine this spring.

Germany dragging its feet on providing tanks to Ukraine

German Defense Minister Boris Pistorius said that members of the Ukraine Defense Contact Group failed to agree on tanks supply. His statement comes as a major disappointment of the Ramstein meeting.

“As far as the delivery of the Leopard is concerned, there is no unanimous opinion,” Pistorius said.

“All the pros and cons have to be weighed very carefully,” the German Defense Minister said, adding that there is no clarity on when a final decision could be made.

He refused to say whether Germany would allow Poland and other countries that said they were ready to do so, to re-export the tanks.

Germany is “ready to move quickly” if allies reach a consensus on sending tanks to Ukraine, Pistorius said.

Poland’s Defense Minister Mariusz Błaszczak acknowledged a decision on sending the equipment to Ukraine had yet to be agreed. Even as Germany has not authorized such a move, he said he hopes to create a coalition of countries that own these tanks in order to send them to Ukraine.

Zelenskyi reacts to lack of progress on supply of tanks

Ukraine will have to keep fighting to ensure it has enough modern tanks, President Zelenskyi said as the allies concluded the eighth Ukraine Defense Contact Group meeting at Ramstein Air Base in Germany. “Today is the day of Ramstein and defense news for Ukraine, which our diplomatic efforts bring week after week. Not everything can be announced in public, including what is discussed in Ramstein. It is a closed-door discussion, as it should be,” the Ukrainian President said in a nightly address Friday.

“In general, we can conclude that today’s Ramstein [meeting] will strengthen our resilience. The partners are firm in their stance to support Ukraine as long as it takes for us to win”.

“We will still have to fight for the supply of modern tanks, but every day, we make it more obvious there is no alternative to making the decision on tanks,” Zelenskyi said.

Addressing the participants of the Ukraine Defense Contact Group meeting, President Zelenskyi called to supply longer-range missiles and F-16 aircraft to Ukraine. “I can thank you hundreds of times and it will be absolutely just and fair, given all that we have already done, but hundreds of ‘thank you’ are not hundreds of tanks. All of us can use thousands of words in discussions, but I cannot put words instead of guns that are needed against Russian artillery, or instead of the anti-aircraft missiles that are needed to protect people from Russian airstrikes,” Zelenskyi said.

Forcing Russian troops out of Ukraine in 2023 is unlikely, U.S. military chief says in Ramstein

Statement by U.S. Chairman of the Joint Chiefs of Staff General Mark Milley that Ukraine’s victory on the battlefield in 2023 is unlikely, was another disappointment of the Ramstein meeting on Friday.

“From a military standpoint, I still maintain that for this year it would be very, very difficult to militarily eject the Russian forces from every inch of Russian-occupied Ukraine,” Milley said at a news conference after a meeting of the Ukraine Defense Contact Group at Ramstein Air Base.

What can happen is a continued defense, stabilizing the front, depending on the delivery and training of all of this equipment, Milley said. “I think it’s very, very possible for the Ukrainians to run a significant tactical or even operational level offensive operation to liberate as much Ukrainian territory as possible,” the U.S. Chairman of the Joint Chiefs of Staff added.

“But I do think at the end of the day this war, like many wars in the past, will end at some sort negotiating table,” Milley is quoted as saying.

Russian state security services have a plan to use the Russian Red Cross to stem the international community’s supply of heavy weapons to Ukraine, according to the Ukrainian Security and Cooperation Centre (USCC), a leading strategic policy NGO currently embedded with the Ukrainian military.

Based on its access to Ukrainian strategic and military intelligence sources, the USCC reports that Russian agencies will soon use the Russian Red Cross to allege war crimes by the Armed Forces of Ukraine using Western-supplied weaponry. Read the full text in English at the link.

A year into launching a full-scale invasion of Ukraine, russia is supposedly planning another major offensive to make up for its losses on the ground and justify its heavy human cost at home. There is no clear picture of what it might look like, especially after seeing Ukraine’s determined resistance and ongoing support by Western countries. Watch Ukraine in flames #316 to find out whether russia is planning to regain the initiative and how the Armed Forces of Ukraine are preparing for the possible offensive.