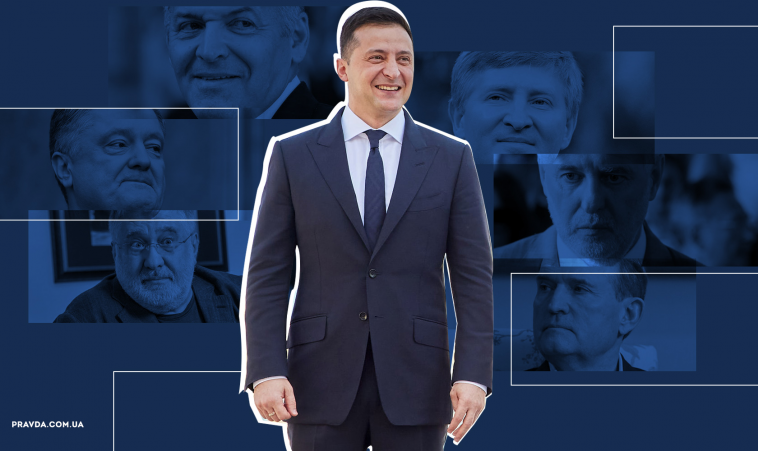 In a video address to the nation released last week, President Zelenskyi underscored the importance of sanctions against Viktor Medvedchuk. The President also made clear his support for the rollout of the U.S. sanctions against Kolomoyskyi. In his address, Zelenskyi mentioned several more names – Akhmetov, Firtash, Pinchuk, and Poroshenko. Has he embarked on a crusade against the oligarchs? Will he succeed? Analysis by “Ukrainska Pravda” journalists Roman Romaniuk and Roman Kravets seeks the answers. We’ve picked key points, read on.

How it started: “a candidate against the oligarchs”. In 2019, many Ukrainians cast their votes for Zelenskyi while actually voting for Vasyl Holoborodko, the protagonist of the “Servant of the People” (Sluha Narodu) TV series played by actor Volodymyr Zelenskyi. A modest school teacher, a man like everybody else, with no privilege, Holoborodko-Zelenskyi got a chance to lead the country, and keep the old elites out.

In actual politics, very soon, Zelenskyi had to start looking for ways to coexist with the oligarchs. For quite a while, the new president tried to stay equally distant from all the oligarchs.

As happened before, the oligarchs took turns assuming the role of the President’s favorite. One way or another, Pinchuk, Kolomoyskyi, Akhmetov, and Lyovochkin neared the President and his immediate circle in the past two years, without actually becoming part of it.

“Names do not matter, whether it’s Medvedchuk, Kolomoyskyi, Poroshenko, Akhmetov, Pinchuk, Firtash or anyone else. What’s important is if they are ready to operate transparently and uphold the law, or they prefer to continue creating monopolies, controlling media, pressuring MPs and civil servants. The former is welcome. The latter is coming to an end,” Zelenskyi said in his address welcoming the U.S. sanctions on his former business partner and cheerer Ihor Kolomoyskyi.

Why real war on oligarchs is impossible. The legitimacy of the comedian-turned-president and the actual state government weighs on Zelenskyi’s approval rating.

A war on the “old” oligarchic groups means above all fighting against their media empires. For them, shattering approval ratings and trust is routine. That’s what happened to Arseniy Yatseniuk and Petro Poroshenko whose approval ratings have been record-low for years.

It would be a disaster for Zelenskyi’s structure of power.

The President chose to peacefully coexist with the tycoons not interfering in their businesses, while playing the role of a mediator and the court of last resort. However, recently, he assumed a more active role.

First enemy: Poroshenko. The conflict of the President with Poroshenko and Medvedchuk, and his confrontation with Kolomoyskyi was inevitable when he took office.

Poroshenko being the 5th president was a natural rival of the 6th president. Zelenskyi’s voters need no explanation why Petro Poroshenko is the enemy. The 2019 election campaign became the point of no return between Poroshenko and Zelenskyi.

After the elections, Poroshenko, an experienced politician, was ready to seal truce. But the new President did not forget the offences. Since then, more and more criminal proceedings against the 5th president keep coming up. “Ukrainska Pravda” quotes anonymous sources saying that the law enforcement agencies have stepped up the efforts to find the evidence of involvement of Poroshenko’s immediate circle into Medvedchuk’s business schemes. So far, no results have come up.

It seems that Zelenskyi chose the pro-European niche for his re-election campaign, so there is no other way but move Poroshenko out of it.

While such criminal case subjects as paintings or appointments made during Poroshenko’s presidency have no effect on pro-Ukrainian voters, the facts of joint business activities with Putin’s crony (Medvedchuk) and thus Putin himself, if proved, can cost Poroshenko support.

Second enemy: Medvedchuk. Viktor Medvedchuk is a leader of the “Opposition Platform – For Life” (Opozytsiyna Platforma – Za Zhyttia) party, and Putin’s crony. He became the first victim of Zelenskyi’s war on the tycoons. Unlike Poroshenko, Medvedchuk is an enemy that the President has earned.

In 2019, Medvedchuk was helping Zelenskyi to win over Poroshenko, in a way. His TV channels “112” and “NewsOne” were praising Zelenskyi, positioning him as the last chance to overthrow Poroshenko. After the elections, those Medvedchuk’s channels formally owned by Taras Kozak made a U-turn and started bashing Zelenskyi.

While Volodymyr Zelenskyi’s job approval rating was gradually sinking, support for the parties on the opposite flanks – pro-Russian “Opposition Platform – For Life” of Medvedchuk and Lyovochkin, and pro-European “European Solidarity” (Yevropeiska Solidarnist) of Poroshenko went up.

In order to overturn the situation, Zelenskyi had to make an unexpected move. He had convenient enemies at hand, but the tools were missing. The National Security and Defense Council became one.

After the sanctions were imposed on Medvedchuk and his ally Kozak, Zelenskyi was expected to do the same towards his predecessor. Even Poroshenko himself seemed to believe that he would be next, so he took formal ownership of “Pryamyi” (Live) TV channel.

The President’s attack on Medvedchuk not only puts the pro-Russian forces to trouble, but also knocks out his predecessor’s chance of being “the biggest patriot”. It opens the way to the pro-western voters, as part of them do not want to vote for Poroshenko.

Third enemy: Kolomoyskyi. When Zelenskyi assumed office, it seemed that the affection between him and Kolomoyskyi would last. What happened in recent weeks is a clear sign of a change. He is making bold statements after the weekly sittings of the National Security and Defense Council that result in unpredictable events.

The National Anti-Corruption Bureau orders landing a flight with actors of the “PrivatBank” case. Chief executives of “Centerenergo”, loyal to Kolomoyskyi are forced out by special forces. There are reports that the Office of the Prosecutor General is ready to sign an indictment for Kolomoyskyi.

In coincided with the Washington’s unambiguous signal, when the U.S. Secretary of State Blinken announced the visa sanctions against the tycoon.

An open war against Kolomoyskyi can become a milestone on Zelenskyi’s political path. If in addition to the fight against Medvedchuk and Poroshenko, he opens a new front, that against Kolomoyskyi, winning would be extremely difficult. If he doesn’t, the chances to survive are even less.