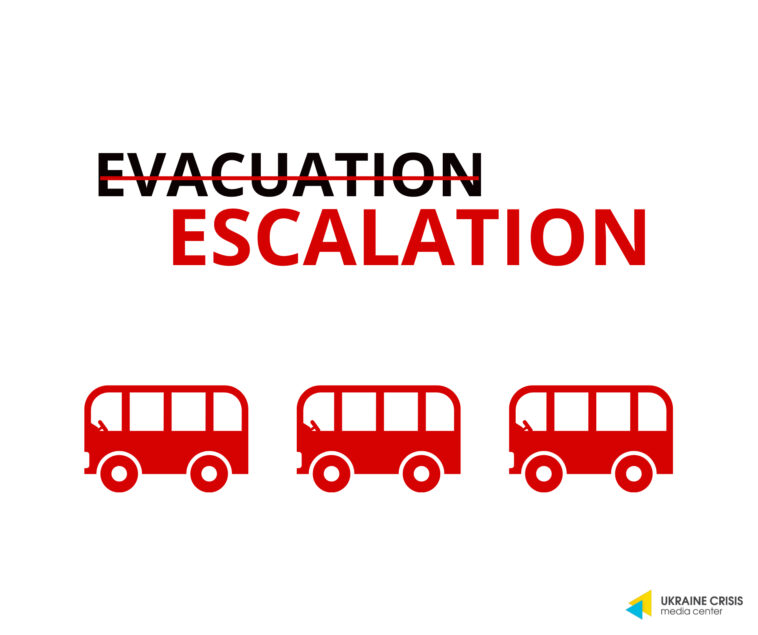 The heightened tensions regarding Russian military buildup on Ukrainian borders, threatening with renewed large-scale invasion, have just reached their peak and the stakes keep rising. With more than 130,000 Russian troops (some sources name a higher number) close by, the news of massive “evacuation” announced by the Kremlin-controlled puppet governments in Donetsk and Luhansk on February 18, 2022 marks a new wave of escalation.

The necessity of “evacuation”, mostly to the neighboring Rostov region in Russia, is explained by the occupying authorities with the alleged threat of “imminent Ukrainian offensive”. These claims have been repeatedly debunked by Ukrainian officials (see, for example, the statement by the Minister of Foreign Affairs Dmytro Kuleba), not to mention that the idea of Ukraine launching offense after almost 8 years of defensive approach and precisely when the Russian Federation has amassed such a substantial military presence is simply illogical.

Moreover, the “evacuation” appears to be rather all-too-well planned to be a forced response to a sudden threat. The key indicator to this is hidden in metadata of the video statements made by D.Pushilin and L.Pasechnik, Russia-installed leaders of the so-called “DPR” and “LNR” – numerous open-data researchers and journalists including Bellingcat confirm that the videos have been recorded on February 16, before the occupying authorities started accusing Ukraine of preparing to attack.

Increased shelling, presented by the occupying authorities as attacks from the Armed Forces of Ukraine (AFU), contributes to maintaining tension and urging people to leave. At the same time, the so-called “prosecutor general” of the puppet republic in Luhansk posted a video on social media, boasting of attacking Ukrainian positions from the weaponry forbidden by the Minsk agreements. Additionally, a car explosion in Donetsk (which the Investigation Committee of the Russian Federation has already opened a case about, but which is believed by Ukraine and the US officials to be staged) and massive gas-pipe explosion in Luhansk also promote panic. Some Telegram channels affiliated with the occupying authorities have already blamed this explosion on Ukraine.

Another worrying development is the fact that “evacuation” is partial – on February 18, when it was just announced, men from 18 to 55 were not able to leave. The next day both Pushilin and Pasechnik signed decrees on illegal “mobilization”.

Among the first people to be “evacuated” were minors, including orphans, from the occupied Donetsk – meaning, they had no opportunity to oppose the decision that, at least partially, appears to be closer to deportation than actual evacuation.  Occupying authorities push for civilians to leave heavily, including the massive dissemination of SMS messages to the locals urging them to evacuate. Meanwhile, Vladimir Putin has announced that each “refugee” is entitled to receive 10,000 rubles (approximately 130 Euros) from the Russian government upon relocation.

At the same time, the term “refugee” is not completely accurate, because Ukrainians on the occupied territories are not in any danger coming from the Ukrainian side – on the contrary, there is a high risk that evacuees may be attacked by Russian proxy forces themselves in a false flag operation to blame the Armed Forces of Ukraine as a pretext for a potential large-scale attack. A similar approach has been taken by the Russian Federation in Georgia in 2008. Therefore, one of the most crucial messages with which the Ukrainian government responded to these developments was a strong urge for the people in Donetsk and Luhansk regions to avoid “evacuation” at all costs. Moreover, they were advised to stay at home, as according to the Defense Intelligence of Ukraine the threat of terrorist attack on the occupied territories has increased due to the “mining of some social infrastructure facilities in Donetsk by Russian special services”.

How the Ground was Laid

The ongoing escalation takes place in a previously created context that includes increasingly aggressive and intense disinformation. Part of this disinformation since mid-February was centered on the “genocide against the people of Donbas” messaging – just a day after Vladimir Putin accused Ukraine of conducting “genocide”, The Investigative Committee released information on the “mass graves” allegedly found in the occupied territories and tried to pin on the AFU.

Moreover, the shelling of kindergarten in Stanitsa Luhanska on February 17th was another destabilization attempt. Initially, the occupying authorities accused the AFU of attacking the kindergarten in the so-called “LNR”. However, it quickly became clear that the place in question was actually located on the government-controlled territory of Ukraine and attacked by the Russian proxy forces to provoke Ukrainian forces to retaliate. The attack involving children was a powerful emotional trigger to further set the ground for the current escalation.

As the situation is rapidly evolving, predictions remain problematic. While the US President Joe Biden in his address on February 18 appeared convinced that Putin has made a decision to invade, Ukrainian authorities remain convinced that while substantial provocations are possible, a large-scale invasion is unlikely.

It appears that things may change on the ground and go in vastly different directions – which adds uncertainty but also allows Ukraine and allies to change the situation. Preemptive declassification and dissemination of sensitive data exposing potential Russian plans, actively used by the US intelligence, appears to be an important element of deterrence strategy – along with collective effort to supply Ukraine with weapons – provide military assistance and demonstrate solidarity in a face of the looming threat.

This strategy is likely to work, but when it does, Russian aggression will not be over in a moment and will still remain a challenge to the security of Ukraine and regional security as a whole.